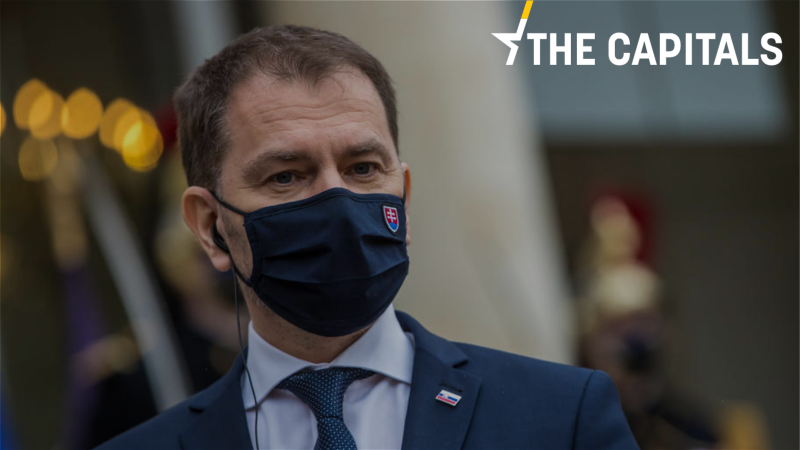 The first batch of Sputnik V vaccines arrived in Slovakia on Monday afternoon. Slovakia will become the second EU country to use the Russian vaccine that so far has not been registered by the European Medicines Agency (EMA).  [EPA-EFE/CHRISTOPHE PETIT TESSON]

Before you start reading today’s edition of the Capitals, feel free to have a look at the article “EU executive mulls tougher rules for microtargeting in political ads“.

Merz announces Bundestag candidacy. Former candidate for CDU chair, Friedrich Merz, confirmed that he will run for a seat in the Bundestag in September’s elections on Tuesday. Read more.

French ministry to explain integrating Doctolib into COVID-vaccine booking system. France’s solidarity and health ministry will have to defend its choice to integrate medical portal Doctolib, which uses Amazon’s hosting services, into its online booking system for COVID-19 vaccinations before the Council of State on 8 March. Read the full story.

Europe not dead: Three in four EU citizens want a more sovereign Europe. The demand for more European sovereignty within the EU is strong despite disparities between member states, according to a study published on Tuesday (2 March). EURACTIV France has more

AstraZeneca for Belgians over 55. The AstraZeneca vaccine can now be given to people over 55 instead of only those between 18-55 years of age, according to advice from Belgium’s Superior Health Council, which states that there are now enough scientific studies that show the vaccine works in all age groups.

The advice is part of a re-assessment of Belgium’s vaccination strategy, which will be discussed on Wednesday and  could accelerate the country’s vaccination process. Out of the three proposals, the Superior Health Council said there is no scientific basis to support the claim that only one dose of the vaccine is sufficient, but recommended allowing more time between the first and second doses of the Pfizer vaccine. (Alexandra Brzozowski, EURACTIV.com)

Sunak to keep spending ahead of ‘challenging months’. The UK government will continue to pay the wages of people who have been furloughed because of the COVID pandemic until the end of September as part of the Budget to be unveiled by Chancellor Rishi Sunak on Wednesday (3 March). More

EU Commission expects permanent Northern Irish border checks by mid-2021. The European Commission expects permanent border controls at the Northern Irish border to be in place by the middle of the year despite Agricultural Minister Gordon Lyons of the Democratic Unionist Party (DUP) ordering the halt of any further work on border control facilities. Read more.

In other news, COVID-19 infections among hospital staff has dropped by approximately 95%, Irish Health Minister Stephen Donnelly told the Oireachtas health committee Tuesday. The health minister largely attributed this decline to vaccinations as well as falling levels of community transmission. Donnelly further stated that by the end of the week, 500,000 vaccinations will have been administered with the vast majority of over 85’s receiving the vaccine.

Ireland also saw a sharp decline in the number of COVID-19 cases in hospitals now below 500, a figure Donnelly said was ‘very, very welcome.’ This turnaround could see the National Immunisation Advisory Committee (NIAC) move key workers such as teachers and carers up the prioritisation list as part of their rolling review. (Paula Kenny | EURACTIV.com)

Climate targets may leave Sweden’s Armed Forces without fuel. Sweden’s ambitious plans to stop using fossil fuels may endanger and limit the military’s ability to carry out its tasks, while biofuels will fail to power most vehicles and could also be unsuitable for Scandinavia’s cold surroundings, the country’s military has warned the government. Read more.

‘17+1’ format with China divides Europe, says Lithuanian foreign minister. The cooperation programme between Beijing and Eastern Europe has brought Lithuania “almost no benefits”, Lithuanian Foreign Minister Gabrielius Landsbergis told LRT.lt after the Lithuanian parliament agreed in February to leave the “17+1” summit of China and Eastern European countries, adding that it “is not useful for Europe, it is dividing Europe, because some countries have a different opinion on China than others.” Read more.

Lega Nord hails Denmark, Austria turn to Israel for vaccines. MEPs from the right-wing Lega Nord, which backs the new Mario Draghi government, have backed an initiative of Austria and Denmark to form an alliance with Israel to produce second-generation vaccines against COVID-19 variants, thus moving away from Europe’s joint vaccination strategy. More

In other news regarding Italy’s national recovery plan, EU Commissioner for Economic Affairs, Paolo Gentiloni, said on Tuesday that “we certainly had a few weeks off. Now the work between the government offices and those of the European Commission is proceeding at a good pace”. Gentiloni also said he is “optimistic” about the possibility that the EU countries’ recovery plans could benefit from the early disbursement of 13% of the funds “before the summer break”. (Daniele Lettig | EURACTIV.it)

Spain records over 4 million unemployed for first time since 2016. February saw Spain hit its largest unemployment figures since April 2016, which according to sources, are due to the “heavy impact” of the pandemic. Read the full story.

19% of Britons with assets exceeding £1 million prefer to invest in the Greek property market due to its affordability and quality of life compared to Britain, CEO World Magazine reported on Monday. More

Vučić: The EU has left us in the lurch, Balkan countries should help each other. The situation surrounding the procurement of COVID-19 vaccines has shown that Balkan countries have been abandoned by the EU and that the Balkan people should be cooperating and helping each other, said Serbian President Aleksandar Vučić. Read more.

Romania finally has a budget. Romania’s parliament adopted its budget law without approving any amendments on Tuesday. Although the bill still needs to be signed into law by President Klaus Iohannis, this is seen as a formality since the budget was adopted exactly in the form proposed by the government. Read more.

Croatia confirms interest in Russia’s Sputnik V. Croatia has confirmed its interest in purchasing the Russian-made Sputnik V coronavirus vaccine in line with EU and Croatian legislation, the Russian Embassy in Zagreb confirmed on its Facebook and Twitter accounts Tuesday evening. Read more.

Serbian PM discuses EU membership with Commissioner Varhelyi. Serbia’s reforms in the area of rule of law remain a top priority for the European Union in the process of Serbia’s accession to the EU, European Enlargement Commissioner Oliver Varhelyi told Serbian Prime Minister Ana Brnabić in a video discussion on Tuesday about the EU’s methodology in membership negotiations, the Serbian cabinet has said in a statement.

Serbia has made considerable progress especially in the area of rule of law, media freedoms, the protection of journalists, and with regards to the economy, said Brnabić. According to the prime minister, the accession talks should be harmonised with Serbia’s reform efforts, the statement said. Serbia has accepted the new methodology, in the belief that it will enable it to lead negotiations with European officials in a more concrete and favourable way, Brnabić added. (EURACTIV.rs | betabriefing.com)