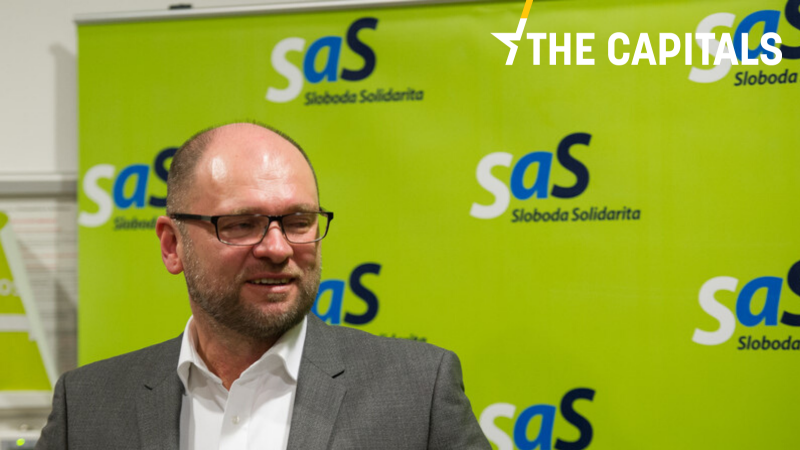 Before you start reading today’s edition of the Capitals, feel free to have a look at the article German EU Presidency: Government sets priorities as ‘motor and moderator of Europe’.

Also, take a look at the op-ed “Social unrest in America highlights the challenges it faces“, by professor Constantine Arvanitopoulos.

Now that many European countries are starting to embrace a ‘new normal’ while others are seeing new infection spikes, make sure you stay up to date with EURACTIV’s comprehensive overview, which is regularly updated with the help of our network of offices and media partners. Also, check our country update pages, such as the one for Italy and Croatia.

The proposed common debt creates moral hazard that’s “not far from crazy”, Sulík said in the interview, adding that investors will one day lose their confidence in the euro because they will look at the debt level of southern countries. He also lashed out against Italy. EURACTIV Slovakia’s Zuzana Gabrižová has more.

Lufthansa deal approved. Despite concerns of a last-minute veto from a billionaire stakeholder, the Lufthansa rescue package was approved by the company’s shareholders with 98% approving. The €9 billion deal was also approved by the European Commission on Thursday (25 June). Read more in the latest from EURACTIV’s Sam Morgan.

In other news, 45 employees of a meat plant in Wildeshausen (Lower Saxony) were tested positive for COVID-19. The plant is operated by the German meat product manufacturer Wiesenhof. EURACTIV Germany’s Britta Weppner and Sarah Lawton report from Berlin.

France, Netherlands reach deal on KLM bailout. The Dutch government will unblock close to €4 billion in guaranteed and direct loans to KLM and appoint a trustee to its board, Reuters quoted three different sources as saying.

Belgium creates COVID-19 commission. The Belgian parliament has approved the creation of a special committee to investigate Belgium’s approach to the COVID-19 pandemic, which will consist of 17 members and be assisted by four experts who have two months to prepare a preparatory report on the committee’s assignments, so that they can start work immediately after the summer break. If necessary, the committee could be transformed into a parliamentary committee of inquiry, if misconduct is identified. Socialists, Liberals, Ecolo-Groen, CD&V, N-VA and DéFI voted in favour, while the far-right Vlaams Belang and leftist PVDA voted against because they demanded a full parliamentary investigation committee. (Alexandra Brzozowski | EURACTIV.com)

The article was an interview with actress Maxine Peake who said that “the tactics used by the police in America, kneeling on George Floyd’s neck, that was learnt from seminars with Israeli secret services.”

Labour haemorrhaged support from the Jewish community under Jeremy Corbyn’s leadership and Starmer promised to root out anti-semitism within the party. His sacking of Long-Bailey, a close ally of Corbyn who ran for the leadership, has been welcomed by Jewish community leaders but prompted an angry response from some on the party’s left. (Benjamin Fox | EURACTIV.com)

Between a rock and a hard place. The coronavirus situation in Finland has improved significantly in June as the number of diagnosed infections and deaths have been low and restrictions have mostly been lifted. However, across its borders, to the East and West, things are quite different. One could say that Finland is ‘sandwiched’ between a rock and a hard place. EURACTIV’s Pekka Vänttinen reports.

“We need a little more time. There are still unused funds to be used for school buildings. We are doing everything we can to be ready,” he added. EURACTIV Italy’s Alessandro Follis takes a closer look.

‘US must impose sanctions on Turkey’. In an exclusive interview with public TV broadcaster ERT, US Senator Robert Menendez said US officials should not put Greece and the Republic of Cyprus in the same category as Turkey when they refer to geopolitical tensions in the eastern Mediterranean region, explaining that Turkey is the region’s only problem-causing country.

“As the United States is a state of law, it must enforce the law and impose sanctions on Turkey,” he said. Read more.

Calviño, Donohoe and Gramegna compete for Eurogroup helm. Ministers Nadia Calviño (Spain), Paschal Donohoe (Ireland) and Pierre Gramegna (Luxembourg) will compete for the Eurogroup presidency. While Calviño could become the first woman to chair the body, her colleagues have promised to become ‘bridge builders’ between the different positions. Read more.

Cyberattacks increase during pandemic. The number of cyber incidents increased by one-third during the COVID-19 pandemic in the Czech Republic, said Karel Řehka, director of the Czech National Cyber and Information Security Agency (NCISA) during a Security Conference held on Thursday (25 June) in Prague. About half of these cases involved data encryption through blackmailing programs (ransomware), the director added.

According to Řehka, the Czech Republic has so far been lucky to avoid being hit by serious global cyberattacks and other incidents but he cautioned that “it will not last forever.” In his view, the pandemic was useful in drawing the attention of managers and politicians to the issue of cybersecurity, as hospitals in Czechia are often targeted by cyberattacks. (Lukáš Hendrych | EURACTIV.cz)

Government buys twice as many ventilators as needed. The Hungarian government spent about €850 million on ordering more than 16,000 ventilators despite expert analysis predicting that a maximum 8,000 would be needed in the worst-case scenario, news portal 444.hu reported. The government justified the move by saying that it wanted to make sure at least 10,000 machines arrived due to the very competitive market. (Vlagyiszlav Makszimov | EURACTIV.com)

Isărescu, the world’s longest-serving head of a central bank, has denied in the past accusations of cooperating with the secret police, known as Securitate. A body charged with analysing the archives of the former secret service asked a Bucharest court to confirm its discoveries. EURACTIV Romania’s Bogdan Neagu looks into it.

In other news, Romanian public health authorities announced Thursday (25 June) that 460 new infections were reported in the previous 24 hours, the largest number of new cases registered in a single day since 22 April. The number of recovered patients reached a record high at 515, the only time more than 500 people were considered recovered in a 24-hour interval.

Since the first COVID-19 infection was recorded in Romania almost four months ago, 25,286 people tested positive for COVID-19, 1,565 died and 17,900 recovered. As authorities began to ease restrictions during the past few weeks, the number of new coronavirus cases saw an upward trend, while the number of deaths remained stable. (Bogdan Neagu | EURACTIV.ro)

A new wave. Croatia is experiencing the second-largest spike in COVID-19 cases since the beginning of the pandemic. In the last 24 hours, 95 new patients tested positive for the virus, the majority of which are experiencing very mild symptoms, while a lot of others are asymptomatic.

Because of this trend, experts now believe the virus is losing its power. At this moment there are no patients on ventilators, while 42 of the active cases are currently being hospitalised due to the lack of satisfactory private space for self-isolation. EURACTIV Croatia’s Tea Trubić Macan has more.

Asylum requests rise by 33%. The number of asylum requests in Slovenia in 2019 increased by 33% to 3,820, while the total increase for all EU member states was 11% to 738,425, according to an annual report published on Thursday (25 June) by the European Asylum Support Office (EASO).

Meanwhile, police discovered 22 migrants in the trailers of two food tanks with Serbian number plates at the Gruškovje border crossing with Croatia on Saturday (21 June). According to the Maribor Police, they had come from Bangladesh, India, Turkey and Syria and were visibly exhausted. (Zoran Radosavljević | EURACTIV.com)

Thaci indictment to protect Special Court from closing, says Swedish diplomat. The sudden unveiling of an indictment against Kosovo President Hashim Thaci could be due to the Special Prosecutor’s Office in the Hague having suspected Thaci for trying to mobilise the White House to close the Special Court, said Swedish diplomat and co-chair of the European Council on Foreign Relations Carl Bildt on Thursday (25 June).

Bildt also tweeted that he wouldn’t be surprised to see such efforts increase and called the indictment against Thaci and others “a political bombshell for Kosovo and the Balkans.” EURACTIV Serbia has the details.