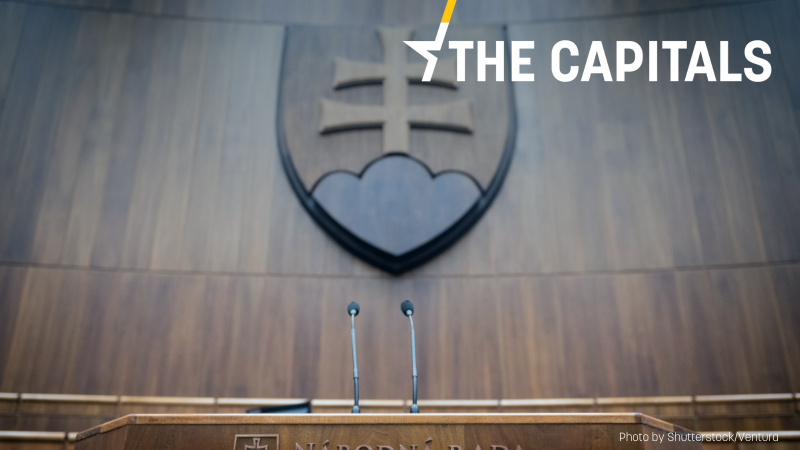 The party did not reach the electoral threshold during last year's national polls but is represented in the parliament by MP Tomáš Valášek, who joined Progressive Slovakia in March 2021 after he left Za ľudí. [Shutterstock/Ventura]

EDITOR’S TAKE: Moscow left alone to deal with geopolitics. Following a critical meeting between President Joe Biden and his Russian counterpart, Vladimir Putin, the White House published a Readout of 145 words. For 121 minutes of conversation between the two presidents. Read more.

The liberal party and Renew Europe member Progressive Slovakia have been labelled as “left-wing extremists” in an annual report of the Slovak Intelligence Service published last week, representatives of the party claim. Read more.

EU health ministers urge fast and coordinated action to contain Omicron. EU health ministers, meeting in Brussels on Tuesday under the chairmanship of Slovenia’s Janez Poklukar, called for fast and coordinated action to tackle the surge in infections and the spread of the Omicron variant, supporting the general applicability of the EU digital COVID certificate and emphasising the importance of booster jabs. Read more.

German parliament factions reshuffle ahead of Scholz government’s confirmation. As the German “traffic light” government is preparing to take power in Berlin, the Greens and the liberal FDP had to restructure their parliamentary leadership. The Greens’ leadership team is balanced between pragmatists and left-wingers, while the FDP promoted allies of party leader and designated finance minister Christian Lindner. Read more.

Suspect in Khashoggi murder arrested at Paris airport. A former member of the Royal Guard of Saudi Arabia, 33-year-old Khalid Alotaibi, was arrested Tuesday by border police as he was about to take a plane to Riyadh, radio broadcaster FranceInfo reported. Read more.

Steel industry faces EU carbon tax hit. The UK steel industry could be one of the big victims of the EU’s proposed carbon tax, according to a new report. Read more.

Finnish PM’s night out sparks media frenzy. Prime Minister Sanna Marin, who enjoyed Helsinki nightlife with friends on Saturday, received a series of text messages that instructed her to self-isolate after Foreign Minister Pekka Haavisto tested positive for COVID-19. Her failure to do so has prompted an angry reaction. Read more.

Borrell urged to step in after US denied visa to Greek MEP. The group of the EU Left in the European has asked EU top diplomat Josep Borrell to intervene in a case of Greek MEP Stelios Kouloglou, who has been denied a visa to travel to the US. Read more.

Egypt to free Patrick Zaki after 22 months in jail. An Egyptian court has ordered the release of Patrick Zaki, an Egyptian researcher at the University of Bologna who was arrested in February 2020 while visiting his family. Read more.

Spain to soon start vaccinating children aged 5-11. Spain’s Public Health Commission and health representatives of the country’s 17 regions on Tuesday approved the new anti-COVID-19 strategy, allowing for the vaccination of children aged 5 to 11, in a new campaign scheduled to start next week. Read more.

Council of Europe wants answers from Poland following controversial ruling. Poland should explain how, in the context of the Constitutional Court’s recent judgment, it would ensure the effective implementation of its obligations under the European Convention on Human Rights, Council of Europe Secretary General Marija Pejčinović Burić asked the Polish Foreign Minister Zbigniew Rau in a letter sent on Tuesday. Read more.

Romania to ease restrictions ahead of winter holidays. New Year and Christmas parties could be allowed in Romania, as the Bucharest government is discussing a relaxation of the restrictions introduced when the pandemic’s fourth wave hit the country hard. But the authorities are also planning on tightening entry rules in the wake of the Omicron variant. Read more.

COVID testing falls to 13 month low in Albania. The number of COVID-19 PCR tests carried out in Albania has fallen to a 13-month low, with just 13,781 tests carried out over the last seven days. This is an average of just 1968 tests a day, as reported by Exit.al, EURACTIV’s partner. Read more.

Special US Envoy Gabriel Escobar to focus on corruption during Albanian visit. Special US Envoy for the Western Balkans Gabriel Escobar will discuss the “US determination to fight corruption, impunity, and efforts to undermine democracy in the Western Balkans” in meetings with Albanian leaders on 9 December. The US embassy in Tirana announced Escobar’s first visit to Albania on social media. He is scheduled to meet Prime Minister Edi Rama, Foreign Minister Olta Xhacka, and Democratic Party leader Lulzim Basha.

Escobar will “reaffirm the United States’ unwavering support for Albania’s democracy, EU integration, stronger defence cooperation, and opportunities for trade and investment. As outlined in President Biden’s Executive Orders, Escobar will also discuss US determination to fight corruption, impunity, and efforts to undermine democracy in the Western Balkans,” the embassy announced.