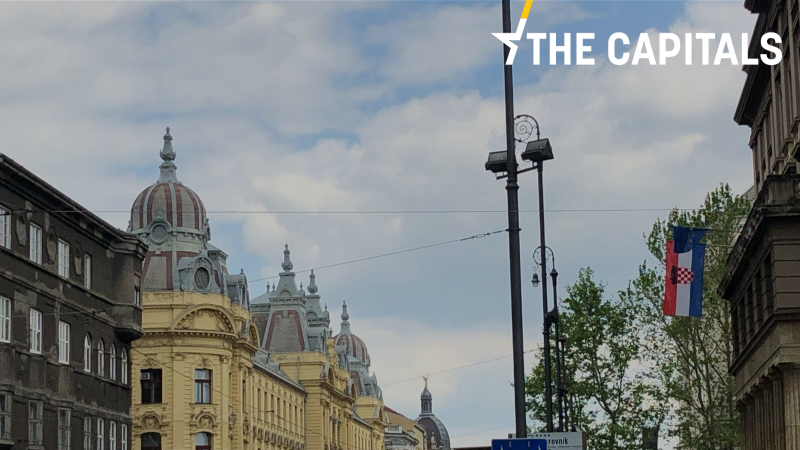 Croatia and Slovenia agreed in 2009 on international arbitration, meant to resolve their row over a sliver of land and sea border in the northern Adriatic and unlock Croatia’s EU accession talks. [Photo by EURACTIV's Sarantis Michalopoulos]

No Schengen for Croatia.  “The rule of law is one of the key standards that states, intending to enter the Schengen agreement, have to abide by. And that includes respecting and enforcing international agreements and decisions of international courts”, said in New York Miro Cerar, the Slovenian Minister of Foreign Affairs.

The statement came in response to the news that the European Commission will give Croatia the green light to enter the Schengen Area on 16 October. The remaining four EU member states, which are not part of the Schengen zone, are Bulgaria, Croatia, Cyprus and Romania.

Cerar’s message is clear: Croatia has to accept an arbitration decision related to its border with Slovenia.

In 2009, Croatia and Slovenia agreed to rely on international arbitration to resolve their dispute over a sliver of land and sea border in the northern Adriatic and unlock Croatia’s EU accession talks.

But Croatia stepped out of the arbitration process after media reported that secret conversations had been held between the Slovenian judge at the ad hoc arbitration court and a Slovenian representative.

Slovenians worry about the fact that Croatian PM Andrej Plenković, whose party belongs to centre-right EPP in the European Parliament, will lobby for Croatia at a meeting on Thursday with current EU Commission President Jean-Claude Juncker. Ljubljana always points the finger at the EPP membership of Juncker and Plenković.

German data retention obligation in line with EU fundamental rights? A groundbreaking verdict concerning data protection was expected today in the city of Leipzig, where the German Federal Administrative Court heard two lawsuits from an internet service provider and a telecommunications provider. They are resisting their obligation to store data, which was implemented into law as a reaction to the wave of terror attacks in Europe. The German government claims that data retention has become key to fight crime.

However, instead of making a final verdict on the case, the court in Leipzig handed over the case to the European Court of Justice, which is going to decide whether the law is in line with EU fundamental rights. (Alicia Prager, EURACTIV.de)

Brexit and agrifood products. On Wednesday (25 September), Spain’s Agriculture Minister, Luis Planas, said that the UK should contribute to ensuring the regular “flow” of agrifood products after Brexit, especially in the case of a no-deal Brexit, EURACTIV’s partner EFE reported.

In an exclusive interview, Planas told the Spanish news agency that Madrid was already working on a contingency plan to mitigate the negative impact of Brexit on all economic sectors.

The tourism and agricultural sectors are particularly concerned about a no-deal Brexit. Planas expressed his concern about “perishable products, fruits and vegetables”.

He has asked the European Commission if Spain would be granted financial compensation in case the country is affected “by logistical difficulties and the closure of the British market”.(EuroEFE.EURACTIV.es)

Google VS publishers. Google won’t pay online news publishers. The EU copyright directive comes into force in France in October, but the digital giant has decided to cut its Google News service to a minimum rather than pay online publishers, as the new law provides.

Google announced the measures it would take to comply with the new rules yesterday (25 September). However, although European law creates a right related to copyright allowing online publishers to better share the revenues among publishers and online platforms such as Google News, Google has chosen to cut its news services to avoid paying any fees. (EURACTIV.FR)

In an interview with EURACTIV’S media partner EuroEFE, German MEP Axel Voss, rapporteur for the controversial EU copyright directive, said that Google acts like a ‘digital dictatorship’: “They are using their economic power to take everything in their path out of their way. We cannot accept that our press and our press services can be affected in such a way that they no longer receive money because everything appears on the Internet.”

Mont Blanc melting. In the Alps, A 250,000 cubic metres large block of ice on Mont Blanc is at considerable risk of collapsing. With the mass falling down at 50-60 centimetre every day, Courmayeur’s mayor, Stefano Miserocchi, ordered the evacuation of some buildings, currently empty. “These phenomena show, once again, that the mountain is in a time of change due to climate factors, and therefore particularly vulnerable,” he said. (Gerardo Fortuna, EURACTIV.com)

An honest restart.“Turkey can do more about the flow of migrants across the Aegean Sea”, Greek PM Kyriakos Mitsotakis told Bloomberg in an interview, following a “good” meeting with Turkish President Recep Tayyip Erdogan in New York. “We want to make up an honest restart and improve the state of Greek-Turkish relations,” Mitsotakis said. (EURACTIV’s partner Athens-Macedonian News Agency)

The arrivals of migrants and refugees to Greece have reached a two-year high. Greek media report that only in the last week, more than 750 refugees and migrants have crossed the sea and been either rescued by the coastguard or reached the shores themselves.

Who runs the best election campaign? Ahead of Poland’s parliamentary elections on 13 October, only less than 5% of Poles believe that the centre-right Civic Coalition (KO/EPP), the largest opposition party, is conducting the best election campaign, according to the IBRiS survey for “Interia”. 57.1% of pollsters believed that the ruling party, Law and Justice (PiS/ECR), is conducting the best campaign.

Meanwhile, the latest poll of the Pollster Research Institute confirms the ruling party’s advantage on political competition. If elections were held today for Sejm, the lower house of the Polish parliament, PiS would obtain 45% of the votes.

Further down the poll, there is also KO (PO, Nowoczesna, Polish Initiative, Greens) with 26%, the Left (Lewica/S&D) with 14.1% and the Polish Coalition (Koalicja Polska/PSL and Kukiz’15) with 7%. The far-right Confederation would also pass the 5% threshold. (Mateusz Kucharczyk, EURACTIV.pl)

No changes in abortion. None of the four law proposals by the opposition are aimed at restricting access to abortions were passed in the Slovak parliament, although one of them was only missing one vote. This comes after 50,000 took the streets of Bratislava in the so-called “pro-life march”.

Green contribution. Slovakia will, for the first time, contribute to the Green Climate Fund with €1.8 million. The fund is one of the key tools for climate adaptation in developing countries. Slovak Environment Minister Lászlá Sólyomos signed the contract on Wednesday (25 September) in New York.  (Zuzana Gabrižová, EURACTIV.sk)

Another dubious subsidy. The criminal complaint filed by the Czech labour and social affairs ministry against the chemical firm from the Agrofert group, Synthesia, a chemical firm from the Agrofert group and originally owned by PM Andrej Babiš, deals with a suspicious subsidy that the company received from the EU social fund, the Czech News Agency reported. As a big company, Synthesia was not eligible for the subsidy but by employing a small locksmithery, it was able to obtain the subsidy. However, after the EU Commission’s warning about the case, the payment was halted. The result of the police investigation is expected in several months. (Ondřej Plevák,EURACTIV.cz)

Bulgaria eyes high-tech investment from South Korea. Bulgaria has offered South Korea a bid to attract investment worth €1.5 billion to build an electric car battery factory. The news was announced during Prime Minister Boyko Borissov’s official visit to the country. Bulgaria wants to produce car batteries for a number of major European companies. The authorities in Sofia keep trying to attract large investors from the automotive industry, with efforts focused on “Volkswagen” and “Hyundai”. However, the latest news is that VW chose Turkey for its new plant. (Krassen Nikolov, EURACTIV.bg)

More signatures for a no-confidence motion. The opposition parties have gathered 237 signatures for a motion of no-confidence, which is more than the minimum number of votes needed to sack the government (233). There are ongoing discussions with other lawmakers to ensure the vote’s success, but the motion has yet to be filed. The leader of PNL (the main opposition party, EPP) said it could be filed early next week. (EURACTIV.ro)

33 persons diagnosed with measles since the start of 2019. The Croatian Public Health Institute (HZJZ) said on Wednesday that until 24 September, it had received reports of 33 persons infected with measles, and currently, new cases are being reported exclusively in Zagreb. Among those infected, 12 were not vaccinated, 5 were insufficiently vaccinated (with only one vaccine), 2 persons received two vaccines, and the vaccination status of 14 persons is not known yet.

Health Minister Milan Kujundzic said on Wednesday that there should be no major problems with the measles epidemic, which has emerged in Zagreb, but everyone should be on alert. (Željko Trkanjec, EURACTIV.hr)

In an effort to tackle fake news on vaccination, earlier this month, Facebook announced that it would direct users searching for information or using vaccine hashtags to web pages set up by public health bodies. Read more: Measles hit Zagreb as social media join fight against anti-vaccination

Less than 4% of citizens eat healthily. More than 75% of Serbian citizens think healthy nutrition is important, but less than 4% say they eat healthy, according to a survey conducted by the retail chain Delhaize Serbia. The survey also found that 15% of the respondents regularly read the labels, while over 70% do so occasionally. At the same time, for 55% of the respondents, the label affects their decision on whether to buy a product or not. (beta.rs,EURACTIV.rs)

EBRD wants wind farms in BiH, authorities don’t. The European Bank for Reconstruction and Development (EBRD) is prepared to invest €300 million in BiH this year to boost growth. EBRD now wishes to expand its investments in the energy sector, primarily to boost the use of renewable energy sources considering BiH’s enormous potential in wind farms. The announcement comes after BiH has decided, with China’s financial support, to construct a new block of the Tuzla thermal coal-powered plant, known as one of the worst polluters in the country. BiH’s PM, Fadil Novalić, previously said that there was no alternative to Block VII and that the project was of strategic significance for the country. (Željko Trkanjec,EURACTIV.hr)