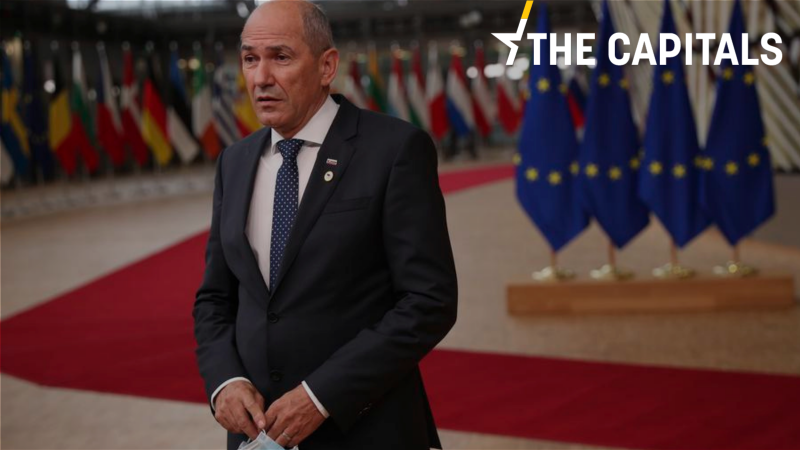 The Marjan Šarec List (LMŠ) says that if they gave up the instruments at their disposal as the largest opposition party they would also give up democracy. [EPA-EFE/FRANCISCO SECO]

Before you start reading today’s edition of the Capitals, feel free to have a look at the article Slovenia takes EU driver’s seat as values questions dominate, by Vlagyiszlav Makszimov reporting from Slovenia.

Also, feel free to have a look at EU touts ‘paradigm shift’ in defence as it inaugurates new fund.

Slovenia’s centre-left opposition has rejected the governing coalition’s call for a political truce during Slovenia’s EU presidency and is determined to continue to use ‘all the available means’ at their disposal, not ruling out a new attempt at a vote of no confidence.

The Marjan Šarec List (LMŠ) said that if they gave up the instruments at their disposal as the largest opposition party they would also give up democracy. More.

Amnesty urges Slovenian EU presidency to work on human rights. Amnesty International has sent a list of demands concerning human rights to Slovenia as the country took over the EU Council presidency for the next six months, which includes achieving progress in the protection and promotion of human rights and the rule of law in the EU. More.

EU politicians demand Wembley to be stripped of Euro 2020 final. Hosting the Euro 2021 semifinals and final at Wembley Stadium in London while cases of the COVID-19 Delta variant are soaring across the UK is a “recipe for disaster”, Pascal Canfin, chair of the European Parliament’s environment committee, said in a letter addressed to Parliament President David Sassoli, asking him to lobby EU presidents Ursula von der Leyen and Charles Michel to intervene. Read more.

Flanders joins federal legal proceedings against French wind farm. Earlier in June, Belgium’s Minister of Justice and North Sea Vincent Van Quickenborne launched a legal battle against the French government’s plans for a wind farm at sea near Dunkirk. Now the region of Flanders is joining the fight. Read more.

The protections, which limit the amount of steel that can be purchased from abroad by UK firms without paying import taxes, were due to expire on Wednesday 30 June, and the government’s recently formed Trade Remedies Authority had urged the government to scrap them. The EU introduced the tariffs on a total of 19 products in 2019, in response to US President Donald Trump imposing tariffs on steel imports. (Benjamin Fox | EURACTIV.com)

Nordic newspapers publish joint petition protesting measures to control media in Hong Kong. Four leading newspapers in Finland, Sweden, Denmark and Norway simultaneously published a joint petition on Thursday, to coincide with the 100th anniversary of the Chinese Communist Party, protesting the closure of the Daily Apple newspaper, and measures to control and censor radio, television, the internet and individual journalists in Hong Kong. Read more.

First attempt to form new Swedish government fails. Ulf Kristersson, the chair of the liberal-conservative Moderate Party, the biggest party in the opposition,  has failed in his attempt to form a majority government, citing failure to find a common ground with other parties on the right and centre despite negotiations covering taxes, migration, climate and energy and crime.

On Thursday, the speaker of the parliament, Andreas Norlén handed the task of exploratory talks to the ex-prime minister, the chair of the social democrats, Stefan Löfven. Löfven resigned on Monday after his minority government had lost a no-confidence vote in the parliament. If a majority for a new government cannot be found in the parliament after four attempts, there will be snap elections. (Pekka Vänttinen | EURACTIV.com)

Italy tightens controls on English fans due to concern over Delta variant. Italy has taken a number of measures before the England vs Ukraine Euro 2020 match, due to take place in Rome on Saturday, to prevent the spread of the COVID-19 Delta variant from UK travellers. Read more.

Students leave Mallorca quarantine after super-spreader outbreak. One hundred and eighteen Spanish students who had celebrated the end of their school year in Mallorca but got caught up in a COVID-19 super-spreader outbreak linked to a total of 1,824 new cases in Spain stopped quarantining on Thursday (1 July) after testing negative for the virus. EURACTIV’s partner EFE reports.

Fugitive Greek neo-Nazi deputy leader caught. Police in Greece arrested on Thursday the deputy leader of neo-Nazi group Golden Dawn who had evaded justice since he was sentenced to over 13 years in jail in October, a police source said.

Christos Pappas had been on the run since a landmark trial handed down sentences to more than 50 Golden Dawn defendants on charges including running a criminal organisation, murder, assault and illegal weapons possession, AFP reported.

In other news, travel to the Greek islands as of 5 July will require a vaccination or disease certificate, a negative PCR test in the last 72 hours or a negative rapid test result in the last 48 hours, said the Deputy Minister of Civil Protection and Crisis Management, Nikos Hardalias.

For 12-17 years old, any test, including self-test, will be accepted, while minors up to 12 years old will be travelling freely.

Council of Europe concerned with Warsaw’s accusations towards ECHR. Council of Europe’s Secretary-General Marija Pejčinović Burić has sent a letter to the Polish Justice Minister Zbigniew Ziobro, in which she expressed the Council’s “concern and disappointment” with the statements of the Polish government on a recent judgement of the European Court of Human Rights. Read more.

Czechs near Turów mine want Commission to join talks with Poland. Czech citizens living near the Polish lignite mine in Turów sent a letter to European Commissioner Virginijus Sinkevicius, asking him to join the ongoing negotiations between Czechia and Poland. Read more.

Slovak former PM Matovic survives no-confidence vote in parliament. The motion of no-confidence tabled before parliament against former Prime Minister Igor Matovič from his current position as finance minister fell short of the necessary 76 votes, as 51 MPs voted in favour, 67 against, and 17 abstained. Read more.

Zagreb mayor believes there will be more corruption-related arrests. After the latest corruption-related arrests in Zagreb, Mayor Tomislav Tomašević (We Can! Green Left political platform) said he believed there would be more arrests considering the scope of the investigation, repeating that the city administration had become a symbol of corruption and that it was his task to change that. Read more.

In other news, Social Democratic Party president Peđa Grbin said Hungarian PM Viktor Orbán’s ad on Hungary’s vision of the EU that was published in some in Croatian media was inappropriate and that he expected the foreign ministry to respond.

“It’s not normal for the Hungarisation of the HDZ (Croatia’s ruling party) to result in Viktor Orbán, who controls the media in Hungary in an iron grip, trying to do the same in Croatia with Hungarian government money,” Grbin told reporters.

Prime Minister Andrej Plenković said Croatia doesn’t agree with Hungary on a number of issues related to the future of the European Union. “Hungary has a somewhat different view of Europe’s architecture than Croatia,” said Plenković. (Željko Trkanjec | EURACTIV.hr)

These interests changed, Vučić explained, when Israel recognised Kosovo’s independence and Belgrade would make its decisions accordingly. He said Serbia would respect its friendship with Israel but would also respect itself and added that he had conveyed this to the Israeli prime minister during a meeting. One of the commitments from the Washington Agreement, signed at the White House in September 2020, was the moving of Serbia’s embassy from Tel Aviv to Jerusalem by 1 July.

In other news, mobile phone service providers in the Western Balkans abolished roaming charges for their members across the region on Thursday.

The agreement to abolish roaming charges covers Albania, Bosnia-Herzegovina, North Macedonia, Montenegro, Kosovo and Serbia and was signed in April 2019 at the second Western Balkans Digital Summit in Belgrade. The first stage of implementation brought reductions of 83 and 96% in roaming charges before being completely abolished. (EURACTIV.rs | betabriefing.com)

Croatian FM: Changes to Dayton Accords disastrous for peace in Europe “The Dayton-Paris agreement is the most important treaty since World War II and amending it would be disastrous for peace in all of Europe”, Croatia’s Foreign and European Affairs Minister Gordan Grlić Radman said at Prespa Forum in Ohrid, North Macedonia. Read more.

In other news, the government of the Federation of BiH, the Bosniak-Croat entity, has been notified that its Chinese partner signed the contract for half a million Sinopharm vaccines and has finalised all administrative procedures needed for the contract to be implemented, N1 reported. FBiH Prime Minister Fadil Novalić confirmed earlier that the FBiH authorities had signed a contract with China’s vaccine producer Sinopharm for half a million doses, but that he could not reveal more details, due to the contract’s confidentiality clause. (Željko Trkanjec | EURACTIV.hr)

International partners concerned over Montenegro’s cigarette smuggling. The Montenegrin government announced that illegal transit and illegal placing on the market of tobacco products on the territory of Montenegro, with special emphasis on activities in the Free Zone of the Port of Bar, indicate a possible risk to state security.

“The Information points out that the reports of international partners expressing concern over the large volume of illegal transit and illegal placing of tobacco products on the market in Montenegro, with special emphasis on activities in the Free Zone of the Port of Bar, indicate the existence of circumstances that pose a risk to security of the state.

One of the priorities of the government is to take decisive measures to completely stop such illegal activities, which are clearly damaging the budget and Montenegro’s international reputation, and the competent authorities must take appropriate measures to end those illegal activities […], it was announced after the government session.  (Željko Trkanjec | EURACTIV.hr)