Sniffer dogs to check air passengers in Finland for COVID-19 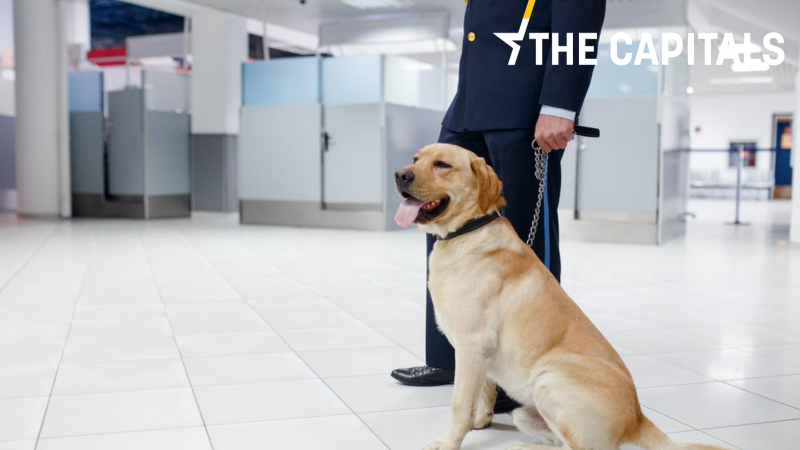 The dogs will be working at the airport test centres in September but will have to get accustomed to the airport noise and bustle first. [Shutterstoick / Dragosh Co]

Before you start reading today’s edition of the Capitals, feel free to have a look at the article “German EU Presidency charts ‘financial stability’ for Europe’s media sector“, written by Samuel Stolton.

Today’s news in the Capitals:

Dogs are now being trained to detect whether passengers at Helsinki airport have been infected with the coronavirus as Evidensia, a nationwide network of veterinary clinics and hospitals, announced plans to pay for the trainers’ wages and for the training, nutrition and medical services of 16 dogs. Failing to obtain public funding after numerous attempts, the project ended up relying on private funding. EURACTIV’s Pekka Vänttinen reports from Helsinki.

Renew Europe calls for coordinated action on COVID-19. Dacian Cioloş, the  President of Renew Europe Group, has sent a letter to EU Commission chief Ursula von der Leyen asking her to establish a task force aimed at achieving a “common approach” in the measures to tackle COVID-19.

“We do not deny that there are strong differences in the circulation of the virus from one country to another, but we ask that, faced with a given situation, the same measure is taken all over the EU. It is also a question of maintaining fundamental principles such as free movement within the EU,” Cioloş said.

Dutch central banker calls for harmonisation of EU economic policies. “If we want to achieve a sustainable Europe that is ready for the future, then we must be willing to do what it takes: It requires us to better harmonise our economic policies, and to jointly invest in sustainable growth. Firmly based on member states assuming responsibility for putting their own house in order,” President of the Dutch central bank Klaas Knot said yesterday. Read more.

Opposition wants a Bundestag investigation into Wirecard. Following support from the liberal FDP, the leftist Die Linke, and the far-right AfD, the Greens have now stated that they want to launch a committee of inquiry to investigate the Wirecard affair, a scandal that has made its way into the highest levels of the German government. Together, the Greens, FDP, and Die Linke have a combined 216 MPs, more than the 178  necessary to start a Bundestag investigation without relying on the AfD. EURACTIV Germany’s Sarah Lawton has the details.

Landmark terrorist trial starts today. Starting today, fourteen people will be judged for two months in the trial of the deadly January 2015 terrorist attacks on French satirical magazine Charlie Hebdo, police officers and the Hyper Cacher supermarket. The trial will be one of the very few trials to be filmed in France. Read more.

Belgium asks neighbours for travel restrictions revision. The Belgian Foreign Ministry has asked the Netherlands and Germany to revise their mandatory quarantine measures for the province of Antwerp. Alexandra Brzozowski has more.

‘Things are now getting serious again,’ health minister warns. In a speech on the state of the coronavirus on Tuesday (1 September), Austrian Health Minister Rudolf Anschober (Greens) tried to strike both a serious and hopeful tone, warning about the months ahead while simultaneously holding out hope for a vaccine in January. Read more.

The new school year starts, amid doubts and worries. Yesterday marked the first day of the new school year in Italy as teachers returned to school to attend meetings in preparation of when students come back to school on 14 September. EURACTIV Italy’s Alessandro Follis has more.

Spain’s tourist numbers plummet in blighted summer season. International tourism to Spain collapsed in the first two months of a summer season blighted by travel restrictions and a gradual rebound in COVID-19 cases following the end of a strict lockdown. EURACTIV’s partner EFE has the details.

Greece in talks with France over fighter jets, as East Med tensions rise. Greece is in talks with France and other countries over arms purchases to boost its armed forces, according to a government official, as tensions grow over energy resources in the Eastern Mediterranean region. More here.

Germany and France stand up for the Czech Republic. EU member states have expressed their solidarity with the Czech Republic after Chinese Foreign Minister Wang Yi said that Czech Senate speaker, Miloš Vystrčil (ECR), would have to “pay a heavy price” for violating the One China principle by organising an official visit to Taiwan. Find out what some of Europe’s leaders have said by clicking here.

Strasbourg court rules on police brutality case. The European Court of Human Rights in Strasbourg ruled against Slovakia in a case of police brutality, where excessive force was used against members of the Roma community in the eastern city of Moldava nad Bodvou during a police raid in 2013. Among those who were raided, two decided to bring a case before the Strasbourg court and were represented by the Center for Civil and Human Rights.

The Court found that the Slovak authorities had violated Article 3 of the European Convention on Human Rights (inhuman treatment) and ruled on financial compensation for the two applicants, who still stand trial in Slovakia for having allegedly fabricated the attack.

Poland changes quarantine rules. Following ten days after contact with an infected person, suspected cases being in quarantine at home, will be dismissed by their primary care physician (POZ), who will decide during a distance consultation whether the patient has symptoms of COVID-19, according to new rules the Polish Ministry of Health is mulling.

So far, the stay at home was ended by two negative test results on the 12th and 14th day after contact with the patient. Rzeczpospolita reports that medical personnel is unsure about such a measure. (Alexandra Brzozowski, EURACTIV.com)

Boiling point. Protests in Sofia against the government of Boyko Borissov reached boiling point early on Wednesday, as the parliament resumes its activities after the summer recess. Borissov’s GERB party will try to gather 120 signatures in order to initiate a change of the constitution. Protesters believe that the change of the constitution is unnecessary and that it is merely an attempt by the prime minister to avoid the need to resign. The streets of Sofia are full with police and people shouting “Mafia get out!”. (Georgi Gotev)

Slovenia for Croatia in Schengen. “Prime Minister Janez Janša was very clear. Slovenia supports Croatia’s membership in the eurozone as well as of the Schengen Area. I think that is good both for Croatia and for Slovenia,” said Croatian Prime Minister Andrej Plenković. Asked whether the Slovenian prime minister had set any conditions for the support, Plenković said he could not see why there should be any.

“I think it is good that Croatia has a firmer, less porous border. That is good for all our neighbours within the European Union, most of all for Slovenia,” he added. (Željko Trkanjec | EURACTIV.hr)

Police chief resigns after mobster meeting scandal. The chief inspector of the Romanian Police, Liviu Vasilescu, resigned Tuesday, following the backlash that erupted after a meeting of police chiefs with relatives of Florin Mototolea, the leader of the notorious Duduianu clan, after the latter’s stabbing, to negotiate conditions for organizing the funeral. The meeting took place in a church, at midnight. While Vasilescu claimed the meeting had been legal and constructive, he did not say why it was necessary to be held in a church and the backlash only intensified after his comments. (Bogdan Neagu | EURACTIV.ro)

Montenegro could withdraw recognition of Kosovo’s independence, says analyst.  The parties which will be given the opportunity to form Montenegro’s new cabinet could push for the country to leave NATO, Belgrade military analyst Aleksandar Radic told BETA, adding that there is currently no procedure according to which Montenegro could actually exit the military alliance.

However, were Montenegro to withdraw its recognition of Kosovo’s independence, this would be “an absolutely different topic”, Radic added. EURACTIV Serbia has the full story.