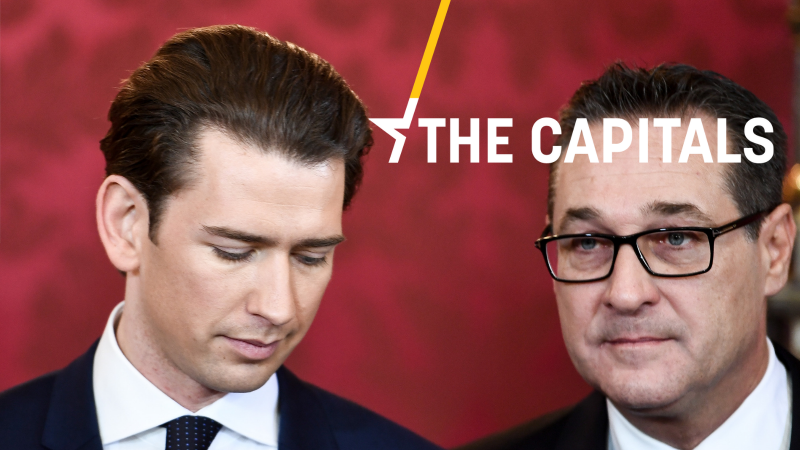 The Capitals is EURACTIV's daily newsletter from across Europe. [EPA/CHRISTIAN BRUNA]

He quit on Saturday following the publication of a video showing him discussing fixing state contracts in return for financial and political favours with a woman posing as the niece of a Russian oligarch. He accepted that the video was “catastrophic,” although he denied breaking the law or following through on discussions.

In Berlin, Die Welt reported that the German secret services have expressed their doubts over the collaboration with Austria, fearing the risk of information leakage to Russia. The journal said it was unclear whether this is related to Strache’s scandal.

German Chancellor Angela Merkel said on Saturday (18 May) European politicians “must stand up” to far-right politicians “for sale” while EPP Spitzenkandidat Manfred Weber hailed the call for snap elections and insisted EPP’s Sebastian Kurz is the right Chancellor for Austria. “The EPP is very clear about its values. The unpatriotic nationalists sell their countries and values,” Weber said.

The German Social Democrats (SPD) criticised the EPP for being “unreliable”, saying it cannot be trusted. SPD chief Andrea Nahles said up to date Christian Democrats have enjoyed the dubious glory of the conservative and right-wing coalition in Austria and “now they are breaking out in cold sweat.”

Udo Bullmann, the chief of the socialist group in the EU House, commented, “When you team up with the far right for the sake of power, you pave the way for corruption – and much worse. This and the blatant lack of vision for a better future is why EPP is not fit to lead Europe anymore.”

On the other hand, German far-right AfD backed FPÖ and declined to condemn the scandal saying that it cannot judge from an isolated incident. Similarly, in Bratislava, Boris Kollar, leader of the Slovak member party of the extreme-right MENF platform (which includes FPÖ), said Strache reacted in a “decent way”, and added that is was “an individual failure”.

In Athens, EU Parliament vice-president Dimitris Papadimoulis tweeted that the scandal in Austria “shows once again that the far right is not only undemocratic but also systemic and neoliberal and deeply corrupt”.

He said it would have a positive effect on the ongoing efforts to find a political consensus in the country considering that Strache and his party were supporting the Serbian party of Milorad Dodik, who advocates the separation of Serbian entity Republika Srpska from BiH.

Unemployment.  The unemployment rate in France has dropped to 8.7%, the lowest level since 2009, according to the French national institute for statistics and economic studies (INSEE). This will be good news for president Macron, following months of the yellow-vest protests against the high cost of living.

Citizens’ Climate Convention. In an effort to address both the “yellow vests” and ecological crisis, the French government has announced the creation of an assembly of 150 French citizens.

The citizens will have to formulate proposals to fight global warming and will be asked to propose a future for the carbon tax, environment minister François de Rugy told Le Parisien in an interview. (EURACTIV.fr)

Tory turncoats. Former deputy Prime Minister and Conservative grandee, Lord Hestletine, has announced that he will be supporting the Liberal Democrats in the upcoming European elections, due to his pro-EU stance.

“I cannot, with a clear conscience, vote for my party when it is myopically focused on forcing through the biggest act of economic self-harm ever undertaken by a democratic government,” he wrote in the Sunday Times. (Samuel Stolton, EURACTIV.com)

Podemos attack Macron. Unidas Podemos’s lead candidate for the EU elections, María Eugenia Rodríguez Palop, has lashed out against French president Emmanuel Macron, saying he has played his part in the far-right rise in Europe.

“Thanks to Macron and his socio-liberal proposals, the far-right exists in the EU […] Thanks to Citizens (centrist Ciudadanos), Vox (far-right) exists in Spain,” she told EURACTIV’s partner EFE in an interview. She backed the idea a broad EU alliance of left-wing parties “without any ambiguity […] it is the best proposal to guarantee fair and social policies for all in Europe”.(EuroEFE.EURACTIV.es)

New UK PM, No New Deal. There will be no renegotiation of the current Brexit deal when Theresa May is replaced as the UK’s Prime Minister, Ireland’s deputy prime minister Simon Coveney has said.

“The EU has said very clearly that the Withdrawal Agreement has been negotiated over two-and-a-half years, it was agreed with the British government and the British cabinet and it’s not up for renegotiation, even if there is a new British prime minister,” he told RTÉ. (Samuel Stolton, EURACTIV.com)

SNP most pro-EU: The Scottish National Party have been the most “unequivocally and unambiguously anti-Brexit” party during the EU election campaign, SNP leader Nicola Sturgeon said on Sunday.

“Scotland’s not for Brexit. Scotland is for Europe and people in Scotland have an opportunity by voting SNP on Thursday to send that message very loudly and very clearly,” she told the BBC’s Andrew Marr show. (Samuel Stolton, EURACTIV.com)

Catholics vs Salvini. The Catholic community did not appreciate Salvini’s use of Christian symbology at a gathering of nationalist parties in Milan on Saturday. “Politics divides, but God belongs to everyone. Invoking God for oneself is always very dangerous,” said Cardinal Parolin, the Vatican Secretary of State.

The influential Catholic weekly, Famiglia Cristiana, lashed out at Salvini, saying it’s not consistent on one hand to kiss the Holy Bible on the stage and then to prevent migrants from landing in Lampedusa.

UN concerns. The UN High Commissioner for Human Rights has written an 11-page letter to the Italian government, asking it to stop the controversial anti-migration decree proposed by Salvinidue to be approved today (20 May). (Gerardo Fortuna, EURACTIV.com)

Brexit chaos and misery. Dutch PM Mark Rutte has reiterated that the UK’s decision to leave the EU is causing “enormous chaos and misery” and that “the whole concept of Brexit is wrong”.

Ahead of the EU elections on Thursday (23 May), Rutte’s VVD party (ALDE) is currently polling at 15%, neck-and-neck with the Eurosceptic Forum for Democracy. Geert Wilders’ far-right PVV is sitting on a 4% share of the vote, its lowest since the party’s formation.

Eurostars. Pro-European forces will hope that the Netherlands’ Eurovision Song Contest triumph will inspire another win on 23 May. It was the first Dutch win since 1975 and four cities have already offered to host 2020’s edition. (Sam Morgan, EURACTIV.com)

Any progressive candidate. Greek PM Alexis Tsipras has said in an interview that his ruling Syriza party (EU Left) supports European Left’s Nico Cue and Violeta Tomic for the EU Commission presidency but explained that he’d back any “progressive” politician who can stand against the EPP’s Manfred Weber.

Participation is the key. The latest poll published by daily Kathimerini shows that the Democratic Rally (DISY-EPP) leads with 28.8%, followed by AKEL 25.4% (EU Left). This time, more than 80,000 Turkish-Cypriots will also vote, while in 2014, just 1,200 voted. (Theodore Karaoulanis, EURACTIV.GR)

“Bunch of losers”. Socialist PM Pellegrini has criticised Luboš Blaha, the chairman of EU affairs parliamentary committee from his own party, for one of his many anti-EU Facebook posts. “If someone has such a substantial problem that he calls the EU a bunch of losers, then this person should reconsider if he wants to stay in the committee of EU affairs,” Pellegrini said. Blaha is known for his pro-Russian and anti-US stance. (Zuzana Gabrižová, EURACTIV.sk)

Pirates sue Commission over PM case. Czech Pirates have decided to sue the European Commission over inaction since it has failed to decide on what may be called a conflict of interest of PM Andrej Babis over EU subsidies for the Agrofert holding. The European Court of Justice will deal with the complaint. (Ondřej Plevák, EURACTIV.cz)

Merkel and Weber. German Chancellor Angela Merkel and EPP Spitzenkandidat Manfred Weber have visited Zagreb to back their Croatian HDZ sister party. They both said nationalism was an EU enemy and pointed out that patriotism was not against the EU.

“We want to be a party of nations and I want to create a European Commission of nations,” Weber said. EURACTIV’s partner Jutarnji list Merkel as saying that Croatia’s accession to the euro area and the Schengen zone is certain in the next term of the European Commission. “There is still some work to be done, however, Croatia is on the right track and Germany wants to be its partner in those efforts.” (Željko Trkanjec, EURACTIV.hr)

Promises to Sofia. “The first thing that I will work for as a President of the European Commission will be for Bulgaria to become a full Schengen member,” Weber said at a gathering of the ruling GERB party (EPP) in Sofia. “There are big differences in Europe, but we have one thing in common: in every village, every town has a small church,” he added.

EU assistance for better state aid control. The EU will help Serbia improve the control of state aid with a €1 million fund. The project will last 2.5 years and will be financed from the IPA 2014. The aim is to help the government, especially the institutions in charge of controlling and allocating state aid, harmonise their rules and procedures with the EU acquis. (Beta-EURACTIV.rs)