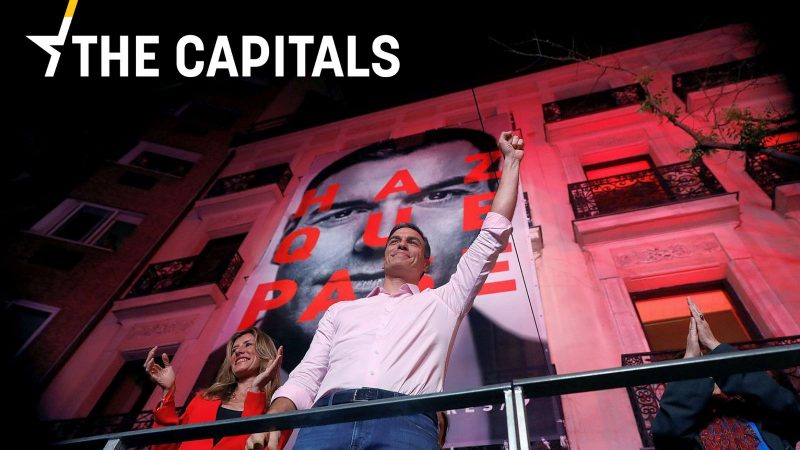 The Capitals is EURACTIV's daily newsletter from across Europe. In the photo: Spain's Prime Minister Pedro Sanchez. [EPA/JuanJo Martin]

The Capitals brings you the latest news from across Europe, through on-the-ground reporting by EURACTIV’s media network. You can subscribe to the newsletter here. In this edition: Socialists win in Spain, Merkel and Macron receive Western Balkans leaders, migration row continues in Belgium, and much more.

Socialists win in Spain, but no clear majority: Spanish Prime Minister Pedro Sanchez’s Socialist Party (PSOE) won the most votes in a snap general election on Sunday, but fell short of an outright parliamentary majority and will need to seek coalition partners, according to official preliminary results.

“The Socialist party has won the general elections,” declared Sánchez shortly after learning the official results.  “Thus, the future has won and the past has lost.”

PP was followed by the centre-right Ciudadanos (Citizens) with 15.9% for 57 seats, and the leftist Unidas Podemos (United we can), who won 35 seats.

Vox, the first far-right party to enter the National Parliament since Spain’s transition to democracy after Franco’s death in 1975, obtained 10.3%  of the votes, and 24 seats.

One of the main topics is expected to be the halt in the EU-sponsored Belgrade-Priština dialogue. However, neither Belgrade nor Priština expect much from the meeting, as neither side appears ready to back down.

Serbian President Aleksandar Vučić will come to Berlin via Beijing, returning from an international Belt and Road forum, where he met with Chinese President Xi Jinping and Russian President Vladimir Putin.

According to Vučić’s statement, Putin has promised to support Belgrade resolve the Kosovo issue and would “not allow anyone to harm Serbia”.

Vučić refuses to resume the dialogue in Brussels until Priština abolishes the taxes it has imposed on Serbian products.

Kosovo President Hashim Thaçi told Beta news agency in an interview there will be no talks on double sovereignty, autonomy, a Bosnian Serb Republic-style solution or any compromise model at the summit, but that there can be talks about the mutual recognition of Kosovo and Serbia.

“In Berlin, there will be no talks, negotiations, or agreements,” Thaçi said. (Beta-EURACTIV.rs)

Germany’s conservatives issue anti-nationalist rallying cry. Chancellor Angela Merkel’s Christian Democrats (CDU) and their Bavarian sister party, the Christian Social Union (CSU), launched their first joint European election campaign with a call to resist those seeking to undermine the European Union. “Today, Europe is under pressure; it is on the defensive,” CSU’s Manfred Weber told a conference of the two parties in Münster on Saturday. Europe must “be defended against the nationalists and the egoists,” he said.

Greens set German Liberals’ political agenda. Germany’s Free Democratic Party (FDP) leader Christian Lindner is failing to set his own political agenda because of the mounting influence of the German Greens, EURACTIV’s media partner Der Tagesspiegel writes on 28 April following FDP’s party weekend convention. “The FDP is acting like a student who has to hastily catch up on school subjects because he has been missing classes for months,” it writes. (Claire Stam, EURACTIV.de)

Leonardo da Vinci, the Renaissance hero to smooth France-Italy row: President Macron and President Mattarella will commemorate the 500th anniversary of the death of the Renaissance genius on Thursday, an occasion to ease tensions between the two countries.

After visits to the Royal Chateau of Amboise, where da Vinci died, and lunch at the Château du Clos-Lucé, the two heads of state will go to Chambord where 500 young French and Italians will gather to celebrate the Renaissance.

Jadot wants a climate refugee statute: The head of the French Green list for the European elections, Yannick Jadot, called on Sunday for a European statute for climate refugees.

“The bulk of those who migrate today, either in their country or within the region, especially in the countries of the South, are environmental exiles,” he explained on France Inter.

“That’s why we have a responsibility too. If we fight climate change on our own scale, we reduce the pressure on habitable land and let people who want to live where they were born,” he insisted. (EURACTIV.fr)

Migration pact row continues. If the nationalist Flemish N-VA is part of the next federal government, it will “not actively cooperate” in the framework of the UN migration pact, former migration minister Theo Francken announced during an election debate this weekend ahead of the regional, federal and European elections.

Francken also said that the party will not participate in the regular biannual assessment for safe, orderly and regular migration.

Far-right to up presence in EU elections: The former leader of the far-right anti-Islam English Defence League, Tommy Robinson, has announced he will be running in the upcoming European elections.

In a post published on his website last week, he said: “They’re laughing at us. All of them — Theresa May, Jeremy Corbyn, the European Union bureaucrats. 17.4 million of us voted for Brexit, but they don’t care about people like us.” (Samuel Stolton, EURACTIV.com)

Young, Italian and Catholic? Salvini’s Lega wants to pay for your wedding: A draft law submitted by 51 right-wing Lega lawmakers is meant to contribute towards the wedding bill of new couples. However, the proposed tax deductions up to €4,000 would apply only to religious ceremonies celebrated within Italy’s territory between low-income Italian nationals under the age of 35.

The so-called “wedding bonus” aims to “facilitate those young couples who wish to celebrate religious marriage,” the draft law says. Although is not specified if this also includes other religious rites, the proposed law is tailored to Catholic ceremonies.

In the last 10 years, the number of religious weddings dropped by 34% in Italy, while almost one out of two couples prefer a civil ceremony. (Gerardo Fortuna, EURACTIV.com)

Record turnout in the EU elections? According to a survey commissioned by the Bertelsmann Foundation, made in January and February by the YouGov Institute in 12 EU countries, 68% of Poles want to vote in the EU elections. The Danes (76%) and Germans (73%) show the greatest interest in going to the polls. The lowest level of interest was found in British (56.7%) and French (61%) voters.

6 lists to run in EU elections. The Electoral Commission has registered six nationwide electoral lists that will compete for the 52 MEP mandates (or 51 if Brexit does not take place before the May elections). There are: Confederacy KORWiN Braun Liroy Nationalists; Spring of Biedron (S&D); European Coalition – PO, PSL, SLD, .N and the Greens (EPP, S&D, ALDE, G/EFA); Law and Justice (ECR); United Left (DiEM 25); Kukiz’15 (alliance with Five Star Movement).  (Karolina Zbytniewska, EURACTIV.pl)

Normalising the extreme. 27% of Slovaks say they would not mind a government supported by neo-fascists party Kotleba-ĽSNS, the newest Focus opinion poll for TV Markiza found. On Monday, the Slovak Supreme Court is expected to rule on the general prosecutor’s case for the dissolution of the ĽSNS party. (Zuzana Gabrižová, EURACTIV.sk)

Tsipras happy with Spanish vote: Greek PM Alexis Tsipras said the prevalence of progressive forces in Spain and the collapse of the right PP is a message of hope for Europe. “Some should not hurry up when they pre-empt the rule of the right in Europe,” he said.

Similarly, EP Vice-President Dimitris Papadimoulis said the Spanish right “had paid” for its turn to the right. “A progressive alliance is a one-way street,” he added. Both politicians have been pushing for a progressive alliance after the EU elections among socialists, leftists and greens against the far-right. (Sarantis Michalopoulos, EURACTIV.com)

Croatia is still investment ‘junk’: Moody’s changed its outlook on Croatia to positive from stable, but its rating is still at Ba2, under the investment category. Moody’s expects that economic growth will be supported by pension reform and that economic activity will benefit from candidacy to join the euro area. (Željko Trkanjec, EURACTIV.hr)

CIA discussed migrant crisis and security:  During a visit of Vaughn Bishop, the CIA’s deputy director, the US offered to provide any assistance BiH might require regarding security cooperation. Security challenges relating to the fight against terrorism, migrant crisis and returnees from foreign war zones were also discussed. (Željko Trkanjec, EURACTIV.hr)