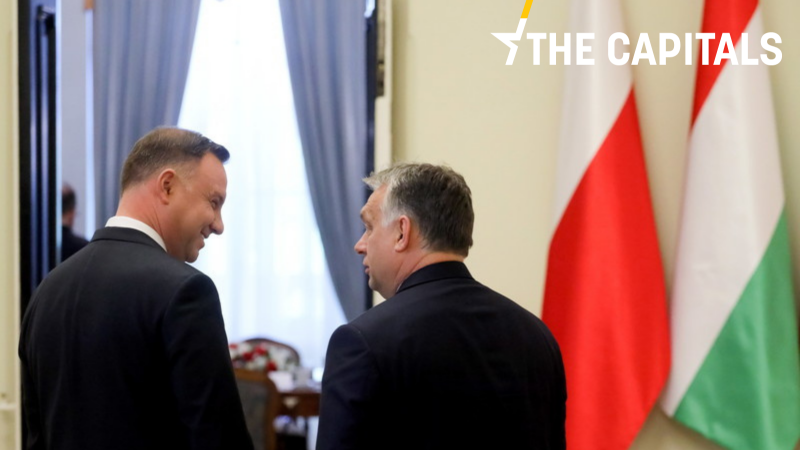 Worldwide, only Mexican President Andrés Manuel López Obrador said he intends to wait for the procedures to be complete, while Russian President Vladimir Putin and Chinese President Xi Jinping have not congratulated the president-elect. [EPA/POLAND OUT]

Before you start reading today’s edition of the Capitals, feel free to have a look at the article “Europe ready to restart transatlantic climate dialogue after Trump ‘parenthesis’“.

Mexican President Andrés Manuel López Obrador said he intends to wait for all the voting procedures to be complete, while Russian President Vladimir Putin and Chinese President Xi Jinping have not congratulated the president-elect Joe Biden.

And in Europe, some EU leaders have also been reluctant to congratulate Biden.

In Poland, the country’s President Andrzej Duda did not use the word “president” in his announcement while in Slovenia, Prime Minister Janez Janša is under attack for having prematurely congratulated Donald Trump. In Hungary, PM Victor Orban, who hoped for the re-election of Trump as his “Plan A”, will now face Biden’s new reality, which opposes “totalitarian regimes”. Read more.

New courtroom construction nearly ready for terrorism mega-trial. In December, the new ‘Justitia’ court will open on the site of the old NATO headquarters for one of the biggest Belgian trials in history. Read more.

Demonstration against coronavirus measures turns violent. After police tried to break up Saturday’s anti-coronavirus protest in Leipzig (Saxony) because most of the 20,000 participants were not wearing masks or adhering to distancing rules, some attendees clashed with police and attacked counter-protesters and journalists, despite organisers calling for participants to peacefully leave the area. Against police orders, thousands of protestors also marched through the city. Read more.

Luxembourg criticised for inaction against corruption. Luxembourg’s laws still have too many loopholes allowing corruption in government, parliament, the police and prosecutors despite years of calls for action, wrote the Council of Europe’s Group of States against Corruption (GRECO) in its latest report.

Johnson moves to repair Biden relations. UK Prime Minister Boris Johnson moved to strengthen relations with US President-elect Joe Biden on Sunday (8 November), emphasising the common ground between himself and the on free trade and climate change. Read more.

Taoiseach Martin takes pride in Biden heritage. Taoiseach Micheál Martin has welcomed Joe Biden’s win in the US Presidential elections over the weekend, expressing his pride of the fact Biden has Irish heritage. Read more.

Italy’s three-stage lockdown issued to avoid generalised closures. The current three-stage lockdown set to last until 3 December was issued to avoid generalised closures, Italian Prime Minister Giuseppe Conte has said, adding that “refusing the current system could only lead to a complete lockdown, which will not bring any benefit to citizens of the ‘red’ zones.” Read more.

A ‘dangerous’ period until Biden takes over. Biden’s victory in the US election may be interpreted as good news in Athens, however analysts and policymakers fear that until he officially takes over in January 2021, there is a strong risk that Turkey will make “desperate moves”. More.

EU should hold back tariffs on US goods, says Czech foreign minister. The EU should “wait for the new US administration and start negotiations afresh” before imposing WTO-approved tariffs on $4 billion in US imports annually in retaliation for the US providing illegal aid to plane manufacturer Boeing, Czech Foreign Minister Tomáš Petříček (S&D) told Czech Television in an interview. Read more.

Petříček hopes that EU-US trade relations will improve in the upcoming months, noting that it makes no sense to “dust off” the TTIP agreement. New negotiations could nevertheless “build on the past”, he added. EU trade ministers will discuss tariffs in a video-conference today.(Aneta Zachová | EURACTIV.cz)

Orbán and Morawiecki threaten budget and recovery veto over rule of law. As long as EU spending is tied to rule of law criteria, Hungary is prepared to veto the bloc’s long-term budget and recovery fund, wrote Prime Minister Viktor Orbán in a letter to the leaders of the current and next year’s EU Council presidencies – Germany, Slovenia and Portugal – as well as to EU Council President Charles Michel and European Commission chief Ursula von der Leyen, mandiner.hu reported.

Meanwhile, Poland would exercise its “right to protest” if no “agreement on the link between the rule of law and the EU budget” is reached, Polish Prime Minister Mateusz Morawiecki said on Friday, noting that Poland continues to provide all information related to the use of funds but does not accept the rule of law to be interpreted according to the EU’s vision. Read more.

Slovakia does second round of testing. The second round of testing for coronavirus in Slovakia took place during the weekend in some of the more affected regions. Of the 1.5 million people tested as of Sunday at noon, 9,783 (0.63%) tested  positive. Prime Minister Igor Matovič does not exclude another nationwide testing at the end of November. (Zuzana Gabrižová | EURACTIV.sk)

Bulgaria notifies Commission it will block EU negotiations with Skopje. Bulgaria informed the European Commission that it cannot accept the proposed draft negotiating framework for North Macedonia and the attached draft declaration because it does not provide the necessary guarantees for meeting the conditions set by Sofia. Read more.

Croatian president and prime minister congratulate Biden and Harris. “We have congratulated President-Elect Biden and Vice President-Elect Harris, and we will continue building a partnership and good allied relations between Croatia and the US. There are a lot of things that connect us and, of course, there is also a wider transatlantic partnership between the US and the EU,” said Prime Minister Andrej Plenković.

For his part, President Zoran Milanović  said he is “confident Joe Biden’s victory will mean the restoration of the Euro-Atlantic partnership that has been in jeopardy and that Europe will again be the main ally of the USA.” This will also be beneficial for the globalised world, Europe and Croatia, the president added. (Željko Trkanjec | EURACTIV.hr)

Meanwhile, leader of the Bosnian Croat HDZ party, Dragan Čivić, leader of the Bosniak Party of Democratic Action (SDA), Bakir Izetbegović, and members of the BiH Presidency, Željko Komšić (for Croats) and Šefik Džaferović (for Bosniak) separately congratulated US President-Elect Joe Biden calling him a friend of the country. Sarajevo City Hall was lit on Sunday evening with a US flag, as well as messages such as Unity over division and Bosnia remembers. (Željko Trkanjec | EURACTIV.hr)