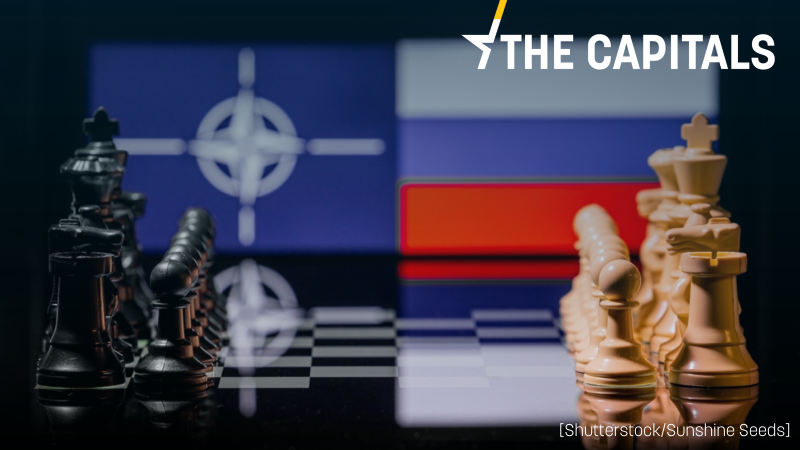 Some NATO members raised their reservations about the “typical” exchanges between Admiral Rob Bauer, NATO’s Chair of the Military Committee, and his Russian counterpart General Valery Gerasimov over mutual security, a NATO source told EURACTIV on condition of anonymity. [Shutterstock/Sunshine Seeds]

The United States has “fortunately” managed to establish a moderate approach toward Russia within NATO despite calls for the opposite, a NATO source told EURACTIV.

Some NATO members raised their reservations about the “typical” exchanges between Admiral Rob Bauer, NATO’s chair of the Military Committee, and his Russian counterpart General Valery Gerasimov over mutual security, a NATO source told EURACTIV on condition of anonymity.

At the beginning of the war, the US and Russia had set up a deconflicting crisis cell at the political-military level to avoid any dangerous military action by air or sea across the world.

The two military officials recently agreed to “be careful”, especially with ships not navigating in close proximity of each other in the Black Sea to avoid “accidents”, the NATO source said.

However, some eastern European members reacted, the NATO source said, asking why there were such exchanges with Russia, with others replying that Bauer is mandated to have this communication channel.

The source added, though, that lately, Russia has been “extremely careful”, especially in the Black Sea, to avoid accidents.

More generally, the NATO source insisted that there is a group of eastern Europeans, Scandinavians, the UK, and former Yugoslavian countries backing a zero-sum approach on Russia, while traditional NATO members, such as the US, France, Turkey, Italy, and Greece are said to be more moderate in this regard.

The NATO source emphasised that “fortunately”, Washington has taken the lead within NATO, and therefore a “more moderate” approach has so far prevailed. On the other hand, the UK had come closer to the eastern European position, with the source estimating that London is seeking a role, especially after Brexit.

Regarding Germany, the source said the country has been “inexistent” within NATO in the last two years. “Germans pay, give and don’t speak”, the source said, expressing the hope that Berlin will soon play a more active role.

“Russians bet on the West’s fatigue”, the NATO source said, adding that beyond this, the alliance is united in supporting Ukraine.

“We all agree to provide – as we have already been doing – Ukraine with assistance as long as our national security is not impacted”, the source explained.

For Ian Lesser, vice-president of the German Marshall Fund, there is not a fundamental gap in the Alliance, but there is “a natural difference of perspective between Allies who are geographically proximate and directly invested in the security challenge from Russia”.

“It is not surprising that there is some sort of different signalling coming from certain capitals in Europe that may appear less strident and less hawkish, but it’s not any sign of a weakening commitment to Ukraine or commitment to NATO’s force posture,” he told EURACTIV.

“There is no weakening of the commitments of countries like the US, France or Germany, but they have a natural tendency to focus on the structural implications and the risk of an escalation,” he added.

Lesser explained that even during the Cold War, there were very different perspectives within the Alliance about how to deal with Russia.

“Germany has its Ostpolitik, the US was concerned about strategic stability with a nuclear-armed adversary, and this led to certain differences of perspective, and sometimes differences of strategy, but at the end of the day, there were no fundamental differences in terms of the overall NATO strategy,” he said.

According to Lesser, the recent missile incident at the Polish-Ukrainian border showed that “there is a very pronounced awareness of the risk of incidents and escalation the longer the war in Ukraine is going on.”

“While it turned out not to be what was initially feared and dealt with in a rather measured and careful way, it does still underscore the reality of the physical threat to NATO members and to their population, especially in those areas close to the war in Ukraine,” he concluded.

No decision on Sweden, Finland before the Turkish elections

The NATO source also estimated that Turkey will not likely waive its veto against Sweden and Finland before the national elections in June 2023.

“Hungary will bow to the strong US pressure”, the source said.

´Hungary’s parliament is set to discuss the ratification of Sweden and Finland’s accession to NATO during its autumn session after a series of EU-related bills have been passed.

“Finland and Sweden are our allies, and they can count on us,” Prime Minister Viktor Orban’s chief of staff, Gergely Gulyas, said in early November.