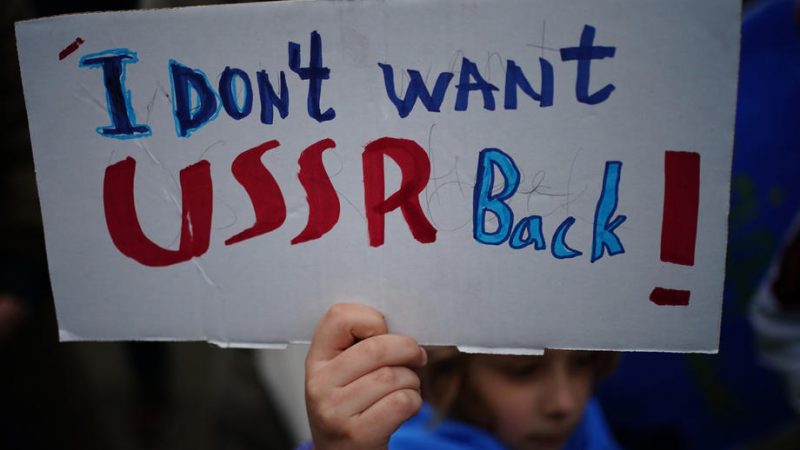 In Brno, the second biggest city of the Czech Republic, anti-Russian graffiti was sprayed at several locations, including a statue representing a soldier of the Soviet army [EPA-EFE/CLEMENS BILAN]

Several cases of vandalism towards Soviet war memorials have been reported in central and eastern Europe as a result of the Russian invasion of Ukraine. While Russian embassies were outraged, national authorities were more understanding of perpetrators. In some cases, municipalities are considering removing the monuments.

Bratislava landmark Slavín, a war memorial dedicated to the Soviet Red Army, was painted blue and yellow on 2 March. Slavín is one of the biggest war memorials in Slovakia and serves as a cemetery for thousands of Belarussian, Russian and Ukrainian soldiers.

The Russian embassy was outraged by the incident and called for immediate clean-up and punishment for the perpetrators. Police opened an investigation on the grounds of damaging the property of others. However, tension increased after the foreign ministry responded that “Russia itself trampled on the memory of the fallen by invading a brother nation.”

“Whoever did this, whether people fooled by anti-Russian propaganda or ideological supporters of Ukrainian fascist Stepan Bandera, they desecrated the memory of all those resting here, including the several hundreds of Ukrainians,” the Russian embassy said.

This was, however, not the only incident in Slovakia. On 9 March, the statue of a soldier on a Red Army cemetery in the eastern Slovak city of Svidník was painted red.

“We are outraged by another clear act of vandalism and disgraceful desecration of the fallen. This wicked crime is, surely, just a consequence of the continuing Russophobic campaign of Slovak media. Moreover, these acts are damaging good relations between Russians and Slovaks,” the embassy wrote on Facebook.

In Brno, the second biggest city of the Czech Republic, anti-Russian graffiti was sprayed at several locations, including a statue representing a soldier of the Soviet army. An unknown person sprayed blue and yellow paint on its pedestal. In ordinary circumstances, the graffiti would be considered vandalism, but this time it is different.

“We do not see any reason why we should quickly remove such expressions of solidarity with Ukraine,” Brno city spokesperson told Czech News Agency.

Strong anti-Soviet or anti-Russian sentiments were visible even before the Russian invasion of Ukraine. In 2020, a statue of Soviet general Ivan Konev was removed from Prague. In the same year, the square where the Russian embassy is located was renamed “Boris Nemtsov Square”, after a Russian opposition politician who was shot dead in Moscow in 2015.

In the Bulgarian capital of Sofia, a debate has started about the removal of the Soviet Army Monument, which stands in the heart of the city. This is the largest monument praising the Red Army, which occupied Bulgaria in 1944 and then formed the totalitarian regime in the country under the control of the Bulgarian Communist Party.

The mayor of the Sofia region, Traicho Traikov, announced that work has begun on moving the 45-metre high monument. It is still unclear whether Traikov will receive a budget and logistical support to do so. The initiative to remove the monument dates back 19 years, but strong Russian influence in the country has so far blocked the process.

The Soviet monument in Sofia has often been the scene of civil protests and demonstrations. At the beginning of the Russian invasion of Ukraine, several messages to Russia were written on it – “murderers”, “occupiers” and “freedom of Ukraine”. The monument was also plastered with posters depicting Putin, over which was written “killer”. After the annexation of Crimea in 2014, the hands of Soviet soldiers on the monument were painted red in protest of Russia’s actions.