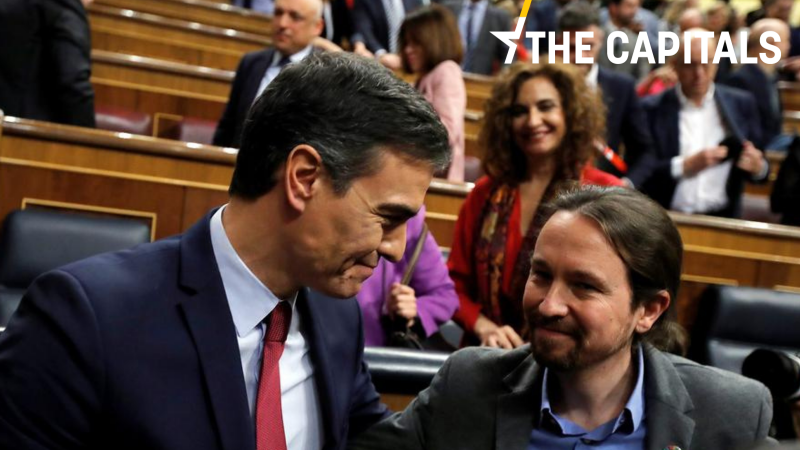 Before you start reading today’s edition of the Capitals, feel free to have a look at the interview with an OECD official: who said “20% of all health spending in Europe is pure waste“.

Spain approves ‘Democratic Memory bill’ to erase Franco’s legacy. The Spanish government, a coalition of socialists (PSOE) and left-wing Unidas Podemos (United We Can), approved on Tuesday a draft bill with specific measures aiming to erase the legacy of the civil war and of Francisco Franco’s dictatorship, EFE and El País reported. Read more.

CDU/CSU and SPD agree to take in more refugees. Germany’s grand coalition reached an agreement on Tuesday (15 September) to accept an additional 1,553 refugees following the fire at the Moria camp on the island of Lesbos.

This will be in addition to the 150 unaccompanied minors that the country announced it would relocate last Friday, and in combination with previous agreements. This means that a total of 2,750 people will be coming to Germany from five Greek islands. (Sarah Lawton | EURACTIV.de)

Government decree recognises COVID-19 as occupational disease. While recognition for health care staff will be automatic if they have developed an acute respiratory disease caused by a Sars CoV-2 infection and have required ventilatory assistance such as oxygen therapy, or which resulted in death, others will have their case examined by two doctors.

Once recognised, all medical expenses will be covered and compensation paid. But the restrictions have been strongly criticised by the unions, who are particularly concerned about the complexity of the procedures for the other workers concerned. (Anne Damiani | EURACTIV.FR)

Respect the rules ‘before it is too late’, Belgian PM warns. Prime Minister Sophie Wilmès (MR) called on Belgians in a video message on Tuesday to comply with the existing COVID-19 restrictions, which include keeping social distance, wearing mouth masks and limiting social contacts.

According to her, the latest figures are “alarming”, but stricter measures will not be taken for the time being. However, she urged everyone to take responsibility and respect the rules “before it is too late”. (Alexandra Brzozowski, EURACTIV.com)

Austria buys millions of masks. Austria bought up a “strategic reserve” of medical equipment including 44.4 million surgical protection masks, 2.6 million respiratory masks and 991,000 rapid COVID-19 test kits which will be stored across five military sites, Chancellor Sebastian Kurz and Defence Minister Klaudia Tanner (both ÖVP) announced yesterday. “We have learned from the challenges of the coronavirus crisis and are bracing for further challenges”, said Tanner.

Recently, the numbers of reported Austrian cases have been surging, which lead Kurz to declare the beginning of the “second wave” on Sunday. (Philipp Grüll | EURACTIV.de)

Teleworking one day a week costs €350 million. If workers in Luxembourg were to telework one day a week, the annual income for the trade and hospitality industry in Luxembourg would drop by €348,328,640, according to the country’s Economic and Social Council (ESC). The estimate is based on the fact that of the 460,000 workers in Luxembourg, 197,914 or 43% of the working population hold administrative positions that do not require a continuous presence at the office.

“In any case, it is a question of finding the right balance between the application of the teleworking scheme and the related budgetary and economic losses”, the report concludes.(Anne Damiani | EURACTIV.com)

Testing regime faces demand crisis. UK Health Minister Matt Hancock is under pressure to resolve a growing problem of public demand for COVID-19 testing, outstripping the capacity to deliver the tests. Hancock told lawmakers on Tuesday that the testing service faced “operational challenges” which would take “a matter of weeks” to fix. Read more.

Donnelly tests negative. Irish Health Minister Stephen Donnelly has tested negative for COVID-19 following concerns that he may have contracted the disease.

The Irish cabinet had been instructed to restrict their movements following the news that Donnelly had been taken ill with a potential case of the virus on Tuesday. These restrictions now no longer stand, and Prime Minister Micheál Martin said that they had originally been put in place out of an “abundance of caution.” (Samuel Stolton | EURACTIV.com)

Budget deficit exceeds expectations. Next year’s budget deficit will be more than €7 billion which is more than anticipated, announced Finance Minister Matti Vanhanen (Centre Party) midway through the three-day budget negotiations on Monday evening (14 September). In other words, the effects of coronavirus, testing and costs for the vaccine to come, are taking a toll on the country. Read more.

“The exercises are worrying, because contrary to [Belarus’] claims, they are orientated at [practicsng] offensive actions,” said Rupšys after meeting with Lithuanian President Gitanas Nausėda and Defence Minister Raimundas Karoblis, adding that there is no direct military threat against the country. For his part, Karoblis said Lithuania would not “give in to the provocations”. (Benas Gerdžiūnas | LRT.lt/en)

Italian Recovery Plan to focus on ‘a few big projects’. “We will concentrate on a few big projects rather than disperse the funds over hundreds of small ones”, Italian Economy Minister Roberto Gualtieri told the Chamber’s budget and finance commissions yesterday. “The Recovery Fund represents a turning point for the relaunch of the economy and an occasion to leave a long period of stagnation behind”, Gualtieri added. Read more.

In other news, main opposition leader Alexis Tsipras revealed on social media the new identity and logo of his SYRIZA party (a star representing a coalition), which many see as an attempt to attract a broader audience and move towards a more socialistic-democratic agenda. (Theodore Karaoulanis | EURACTIV.gr)

New list of flight bans comes into force. On Tuesday, a new regulation on air traffic bans due to the COVID-19 pandemic came into force, valid from 16 September. While the previous ban had covered 44 countries, the new reduced list includes 30. only new country added to the list is France, while Mexico, India, Albania and Romania were removed from it. (Alexandra Brzozowski, EURACTIV.com)

In other news, Warsaw accepts credentials of new German ambassador. On Tuesday (15 September), Polish President Andrzej Duda accepted the credentials of German diplomat Arndt Freytag von Loringhoven. Previously, the appointment of the new ambassador created controversy as his father, a Wehrmacht officer, had worked in Hitler’s immediate vicinity in the 1940s. EURACTIV’s Alexandra Brzozowski has more.

Coordination on COVID-19. Czech Foreign Minister Tomáš Petříček (S&D) met with his Austrian, Slovak, Polish and Slovenian counterparts to discuss regional cooperation and fight against covid-19. “We want to coordinate the measures introduced in order to reduce the spread of COVID-19,” Petříček said after the meeting in Slovenian Brdo.

Meanwhile, the number of new COVID-19 cases is becoming alarming in the Czech Republic, where the average person with COVID-19 is estimated to infect 1.59 others. Tuesday saw a new daily record in the country with 1,677 reported cases. Therefore, more and more countries, including Slovakia, put the Czech Republic on the list of high-risk destinations. (Aneta Zachová)

Grand metro opening. Romania’s high ranking officials were the first to travel on the new metro line in Bucharest, which happens to be the first one built from scratch since the end of the communist era more than 30 years ago. One of the largest infrastructure projects in Bucharest, the M5 line had been delayed for years, with the first tender for its construction held in 2008. Read more.

Modernising the army. Croatian Defence Minister Mario Banožić announced further steps towards modernising the army, which he expects to become one the best-prepared branches of the armed forces. His aim is to maintain the present entitlements, while the future development of projects would be specified in the new long-term development plan for the armed forces for the 2020-2033 period. Read more.

In other news, Croatia registered its youngest COVID-19 victim who happened to be a 42-year-old man with no preexisting conditions apart from slightly higher blood pressure, the authorities have confirmed. Read more.

In other news, Palestinian Ambassador Mohammed Nabhan told Serbian President Aleksandar Vucic yesterday that his country was concerned to learn that Serbia would relocate its embassy from Tel Aviv to Jerusalem, hoping Serbia would, “in the spirit of traditional friendship”, endorse the position of the Palestinian people, said a release from Vucic’s office. Find out more here.