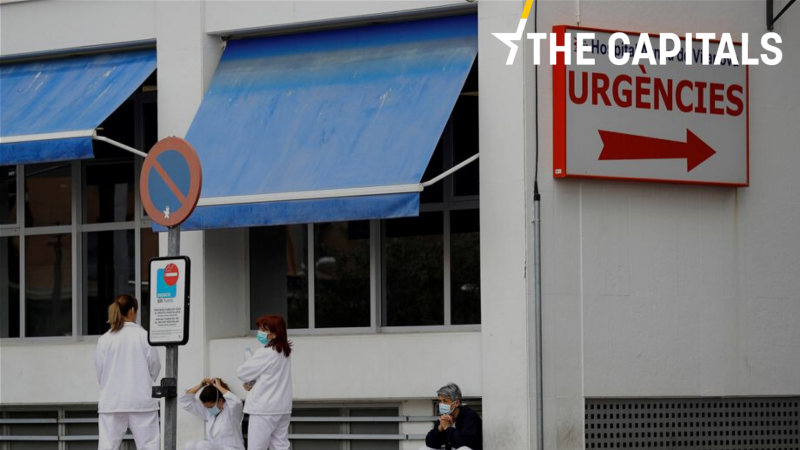 The Spanish government has ordered an additional 1 million, which were due to arrive throughout the week, he added. [EPA/MANUEL BRUQUE]

Before you start reading today’s edition of the Capitals, have a look at the article “EU ‘bureaucracy’ risks hampering life-saving medical devices, MEP warns” by Frédéric Simon.

Distribution of rapid testing kits. Spain began distributing rapid testing kits on Monday (23 March) in a bid to speed up diagnoses in the most exposed and vulnerable sectors of society, as the number of coronavirus cases continues to rise.

The first of these kits will be used on health workers, who make up 11.8% of all COVID-19 cases in Spain, according to Spanish Health Minister Salvador Illa. EURACTIV’s partner EFE reports.

The ‘white people disease’. An estimated 300,000 EU citizens are currently seeking repatriation due to the coronavirus outbreak and are facing discrimination.

“Another thing that worries us is the clear attempt to discredit the European Union, even through the stigmatisation of European citizens abroad, presenting the coronavirus as a kind of ‘white people disease’, blaming European citizens,” the EU’s chief diplomat Josep Borrell said.

First death of coronavirus reported in EU institutions. A 41-year-old external contractor working at the European Parliament died on Sunday (22 March) from respiratory complications after he contracted the virus, the institution confirmed yesterday (23 March). Gerardo Fortuna has more.

Multi-billion-euro aid packages. The German government agreed to a variety of measures on Monday to financially support workers and hospitals throughout the duration of the coronavirus pandemic with packages worth billions of euros. It shows how the government is moving away from its previously strict devotion to using balanced budgets to face the crisis. (Sarah Lawton | EURACTIV.de)

Mask stocks destroyed without replacement? A stock of around 6 million FFP2 type face masks purchased at the time of the A/H1N1 flu was destroyed last year on behalf of the Belgian government after the masks had exceeded their expiration date, Le Vif found.
According to the newspaper report, since then, strategic stocks in Belgium have not been replenished since 2009, no new masks were ordered after destruction. Here is the detail.
///

French farmers looking for extra ‘arms’. By May, French farmers will need over  200,000 seasonal workers throughout France to ensure the harvesting of seasonal fruits and vegetables. The country’s main agriculture union, FNSEA, publicly called on available students, people doing short-time work and the self-employed to give a helping hand to France’s agricultural sector. “We need arms to fill your plates,” said Christiane Lambert, president of the farmers’ union. While foreign workers typically come to France for seasonal work in the fields, the coronavirus crisis and border restrictions have made it impossible for them to enter the country. (EURACTIV.FR)

Easter lockdown. As the confirmed cases in Austria have risen to 3,611 and 16 deaths as of Monday and the country saw a 19% increase of cases after having seen an all-time low over the weekend according to Health Minister Rudolf Anschober (Greens), measures restricting public life have been prolonged until Easter Sunday (13 April). Read more on EURACTIV’s regularly updated coverage regarding Austria’s response to COVID-19.

Extra measures? Public health experts will sit down with cabinet ministers today and discuss a series of possible additional measures aimed at curbing the spread of COVID-19 in Ireland. Further crackdowns on non-essential travel, commercial and social activity are expected, according to The Irish Times.

On Monday, two men in the east of Ireland died from COVID-19. The total number of deceased in Ireland now stands at six, and yesterday saw the highest increase of reported cases at 219 – bringing the total to 1,125. (Samuel Stolton | EURACTIV.com)

‘You must stay at home’. UK Prime Minister Boris Johnson told people that “you must stay at home” and drastically restricted movement yesterday evening, to curb the spread of coronavirus, as fears grew that people were not sufficiently respecting guidance on social distancing. Benjamin Fox reports from London.

Italian PM calls on EU countries to adopt restrictive measures. While Italy saw its daily increase of infections at an all-time low (4,789) since the outbreak started, the country recorded 50,418 overall cases, 6,077 deaths and 7,432 recovered as of Monday. Yet PM Giuseppe Conte reiterated that all EU countries must adopt restrictive measures, in his meeting with the opposition parties on Monday. He added that there is the possibility to deploy the eurozone bailout fund, but that the conditions are not reasonable right now. (Gerardo Fortuna | EURACTIV.com)

Greece happy with ‘escape clause’. Following an ECOFIN teleconference, Finance Minister Christos Staikouras on Monday evening said that “we have the flexibility we need to deal with the pandemic”. EU member states approved the European Commission’s proposal to activate for the first time the so-called “general escape clause” that would ‘pause’ the adjustments member states have to do to meet their fiscal targets and allow them to spend “as much as they need”.

Cyprus has decided to ban all unnecessary travel from today to 13 April. “Despite the measures we have taken, the sacrifices of thousands of workers, the suffering of parents for their children who remain abroad, there are behaviours, which are not disciplined, a lack of self-respect and responsibility that put the whole population at risk,” President Nikos Anastasiades said. (Sarantis Michalopoulos)

Row over elections. As the number of cases reached a total of 749 and the eighth person died on Monday, the date of the country’s presidential elections due to take place in May is causing quite the stir. EURACTIV Poland’s Łukasz Gadzała digs deeper.

Opposition rejects Orbán plan. Opposition MPs voted against considering the law that would keep the state of emergency decrees in force indefinitely until the end of the emergency. Read more.

In other news, tax authorities are to exempt 81,480 SMEs from the flat-rate tax liability until 30 June and delay tax debts already incurred before 1 March until after the end of the state of emergency, Orbán told reporters. Evictions and seizures are also suspended until after the end of the pandemic, and maternity benefits that end during the period will be prolonged. (Vlagyiszlav Makszimov | EURACTIV.com)

Stay tuned on what is happening in Hungary regarding the COVID-19 crisis.

No travelling for two years? The chief of Central Crisis Staff and deputy Health Minister Roman Prymula said that border restrictions could last for one or even two years depending on how other countries manage the outbreak. “The situation in other European countries will not be good. It will take months and months,” said Prymula, noting that this year most Czech citizens will probably spend their holidays domestically.

“We have to avoid the second or third wave of the epidemic, to avoid people from other states, such as Italy, France, Spain and Germany gathering here,” added Health Minister Adam Vojtěch. (Aneta Zachová | EURACTIV.cz)

A blocking economy. Emergency legislation in Bulgaria to deal with COVID-19 can cause serious problems for businesses. Companies are temporarily deprived of almost all legal mechanisms to collect debts or to force their partners to fulfil their contracts and there are already signals for the accumulation of serious inter-company debt. While the Bulgarian government has forcibly closed a number of businesses, others have suffered severely from the crisis in the automotive industry and the decline in demand for raw materials. (Krassen Nikolov | EURACTIV.bg)

To stay in the know when it comes to Bulgaria’s COVID-19 response, read more: here.

Counting the damage.The Croatian government is struggling to mitigate the damage caused by a 5.5 Richter-scale earthquake on Sunday and simultaneously protect citizens from the coronavirus outbreak. Karla Juničič reports from Zagreb.

Lajčák appointed in April? Slovakia’s Miroslav Lajčák will be appointed as the new EU envoy for the Belgrade-Pristina dialogue and the Western Balkans, BETA news agency heard from EU sources. Foreign ministers might also recommend the opening of accession negotiations with North Macedonia and Albania, yet perhaps without a precise date. For more on this, click here.