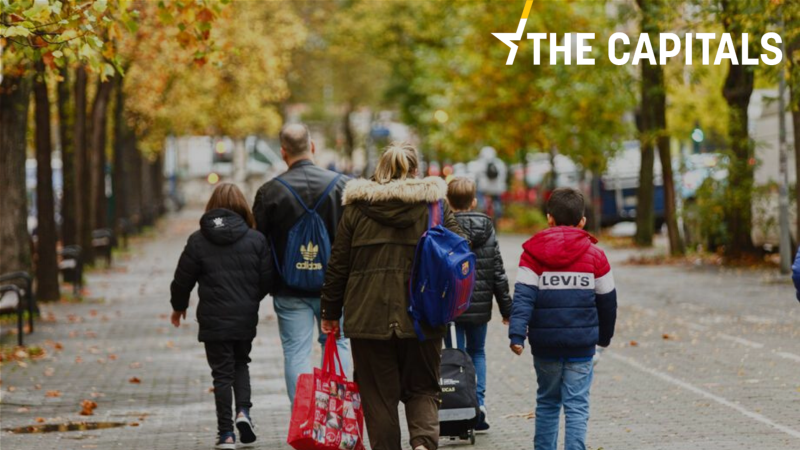 The parental veto has been applied in the Spanish region of Murcia since September. [EPA/ DAVID AGUILAR]

Before you start reading today’s edition of the Capitals, we invite you to read the article “EU sidelined as Berlin summit thrashes out shaky Libya ceasefire“.

MADRID. Government and opposition parties have clashed over the degree of control parents should have over their children’s education, following the initiative by the far-right Vox party to allow parents to veto any complementary activities during school days that they consider inappropriate, including talks on preventing bullying, gender-based violence or homophobia.

But how did this so-called ‘parental veto’ become such a controversial matter in Spanish politics? EURACTIV’s Beatriz Rios digs deeper.

Agreement on a plan for Libya. The leaders of countries with interests in Libya’s long-lasting civil war committed themselves to end their support for the parties in the conflict, to adhere to a UN arms embargo, and intensify international efforts to monitor the embargo at the Libya Conference in Berlin on Sunday (19 January).

In other news, 27,000 people took to the streets of Berlin to protest the government’s agriculture policy and industry on Saturday (18 January). EURACTIV Germany’s Sarah Lawton reports.

Education ombudswoman ‘let go’ after publishing critical book. Following the publication of her book claiming that partisanship and ideology were being prioritised over the good of school children, Susanne Wiesinger, who worked as ombudswoman on “questions of values and cultural conflicts” was let go on Sunday (19 January) for “breach of trust”.

French protest. As the French Senate begins its examination of the bioethics bill, which aims to make medically assisted procreation (MAP) available to lesbians and single women, about 26,000 opponents of the draft law marched in Paris on Sunday (19 January). This is almost three times less than the previous rally in Paris on 6 October, which took place before the National Assembly voted on the text. (EURACTIV.fr)

Turkish connection. The French-speaking Socialists (PS) has expelled St-Josse mayor Emir Kir from the party, after he held a meeting with a delegation of mayors from Turkey, including some members of a far-right party, in December. Alexandra Brzozowski reports.

Doubt of Africa. South African President Cyril Ramaphosa will not be the headline attendee at a UK-Africa investment conference starting on Monday, a small diplomatic blow to the UK government as it first big pitch for post-Brexit trade deals with African countries. The conference is set to be attended by around ten African heads of state, but domestic problems will keep Ramaphosa at home. Benjamin Fox reports.

Apple chief gets award from Varadkar. Tim Cook, head of the US tech giant Apple, will be presented with an award by Ireland’s Prime Minister Leo Varadkar in Dublin today (20 January). Cook will receive the accolade in recognition of Apple’s 40 years of investment in the country. The company is currently one of the largest employers in Ireland, with 6,000 members of staff based there.

But what about the European Commission’s case against Apple? EURACTIV’s Samuel Stolton reports.

No smoking city. Milan’s mayor Beppe Sala intends to outlaw outdoor smoking across the city by 2030. The smoking ban will be included in a city law dealing with the quality of air and climate to be discussed by the city council in March.

Greek ‘hopes’ in Libya. Ruling New Democracy lawmaker Evangelos Syrigos said the Turkish president’s goal is to keep Faiez el-Serraj as an ally in the new Libyan government. Sarantis Michalopoulos has the story.

Babiš’s agribusiness in Hungary. Czech PM Andrej Babiš is the second most important personality in Hungarian agribusiness, the Hungarian weekly HVG reported. That is because, in return for minding the interests of the allies of Hungarian PM Viktor Orbán, the latter helps Babiš’s interests in the sector, the paper claims. The Czech PM’s trusts funds currently include the biggest Hungarian bakery Ceres and IKR Agrár, the fourth biggest agricultural business in Hungary. (Aneta Zachová | EURACTIV.cz)

Public service media does not invite Budapest’s new mayor. Budapest’s new Green mayor, Gergely Karácsony, has not been invited on any of the state-owned public media nor public radio since he took office in October 2019, the politician said in an interview published by Mozgóvilág. In October’s municipal elections, which saw the Greens and opposition parties make gains in other major cities, the leader of the green party Dialogue for Hungary defeated incumbent István Tarlós, who was backed by the ruling party, Fidesz. (Vlagyiszlav Makszimov | EURACTIV.com)

EURACTIV.rs looks into what it takes to fulfil the directive.

In other news, Davor Bernardić, the leader of the Social-Democratic Party (SDP) has said that he would be the party’s only candidate to become prime minister despite him having never had any executive political or business position.

But what would this mean for politics in Croatia? EURACTIV Croatia’s Željko Trkanjec reports.

Steady progress toward ERM II. At a meeting between PM Boyko Borissov and IMF chief Kristalina Georgieva, the two discussed cooperation, as well as the country’s rational fiscal policy and steady development without having accumulated macroeconomic imbalances. Also, Borissov noted that his country had made steady progress towards joining ERM II, a mechanism that aims to reduce exchange rate variability and achieve monetary stability in preparation for joining the European Monetary Union (EMU) and adopting the euro. Bulgaria expects to be invited to the eurozone “waiting room” in April. (Krassen Nikolov | EURACTIV.bg)

A nuclear project, but without China. Romania’s government could cancel the deal with the Chinese company, China General Nuclear Power Group, to build two more 700-megawatt reactors at the country’s sole nuclear power plant in Cernavoda, after the company was recently accused of espionage. “It’s obvious to me that the deal with the Chinese won’t work (…) We will see with which partner we’ll associate to (build reactors),” prime minister Ludovic Orban told HotNews, in a video interview. The prime minister added that all of Romania’s energy deals will, from now on, depend on the European Green Deal. (Bogdan Neagu, EURACTIV.ro)

Defence minister leaves government. Hours after former Defence Minister Karl Erjavec and long-time party leader of the pensioner’s party (DeSUS-Re) lost the party presidency to Agriculture Minister Aleksandra Pivec on Saturday (18 January), he announced his resignation on Sunday, adding he would also be quitting public life to spend more time with his family.

EURACTIV Croatia‘s Željko Trkanjec tells you more about Erjavec’s time in politics and looks into what his replacement could bring to the party.

No nuclear waste on Trgovska Gora. Bosnia and Herzegovina (BiH) wants to reach an agreement with Croatia and Slovenia to prevent the disposal of nuclear waste on Trgovska Gora, which is close to the Croatia-BiH-border, said BIH’s Foreign Trade Minister, Staša Košarac. Otherwise, BiH will try and settle the dispute before an international court. (Željko Trkanjec | EURACTIV.hr)

“Night Wolves” support Serbian church in Montenegro. The head of the pro-Kremlin Russian bikers group, the Night Wolves, has lent strong support to pro-Serbian protesters in Montenegro in a video published on Facebook, in protest against a new law on freedom of religion passed by the Montenegrin parliament at the end of December 2019. The Serbian Orthodox Church (SPC) is opposing the law claiming it is discriminatory and targeted towards its properties in Montenegro. But President Milo Đukanović told Serbian agency Tanjug that the government would not withdraw the law, claiming that protests against it are political and trying to protect Serbian influence in Montenegro.

EURACTIV Croatia‘s Željko Trkanjec provides you with some background on the SPC.