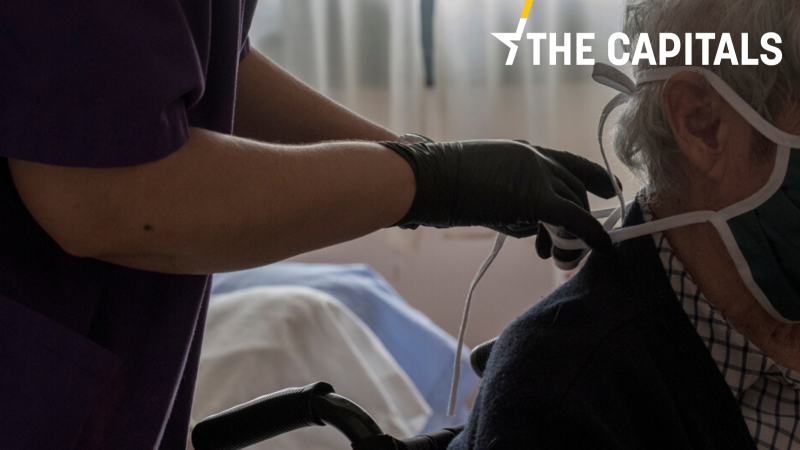 While official data from the health ministry points to the country's death toll being 28,324 as of Tuesday (23 June), it only includes cases that had previously tested positive for the virus.  [Shutterstock/Alicia Fabregas]

Before you start reading today’s edition of the Capitals, feel free to have a look at the article “German EU Presidency: Influenced by lobbyists?” by EURACTIV Germany’s Florence Schulz.

Now that many European countries have started lifting lockdown measures and opening borders, make sure you stay up to date with EURACTIV’s comprehensive overview, which is regularly updated with the help of our network of offices and media partners. Also, check our country update pages, such as the one for Sweden and Bulgaria.

MADRID. A total of 16,937 deaths have been recorded in nursing homes during the coronavirus crisis, representing around 39% of the 42,542 fatalities recorded, according to regional data collated by Efe. This figure would be even higher if suspected but undiagnosed cases were also included, which most regional administrations currently do not do.

While official data from the health ministry points to the country’s death toll being 28,324 as of Tuesday (23 June), it only includes cases that had previously tested positive for the virus. Anyone who was infected and died without being tested, such as in private or care homes, would not be included in the official figures. EURACTIV’s partner EFE takes a closer look.

In other news, Spain entered its third day of “new normal” after more than three months of strict lockdown on population movement and socio-economic activities to curb the contagion.

Authorities have warned residents to remain vigilant to new outbreaks, especially during the summer when large numbers of people gather on beaches and international tourists return to the country. (EuroEFE.EURACTIV.es)

German state becomes first to enforce second lockdown. After initial hesitation, North Rhine-Westphalian leader Armin Laschet (CDU) announced the renewal of contact restrictions until 30 June in the district of Gütersloh, after a massive outbreak at a meatpacking plant infected more than 1,550 employees. However, when asked in a press conference about the possibility of a second wave, Robert Koch Institute President Lothar Wieler was optimistic, claiming that it can be averted.  “It is in our hands. It is our responsibility,” he said. (Sarah Lawton | EURACTIV.de)

Labour market shows signs of relaxation. The number of short-time workers in Austria, which peaked as a result of the lockdown, has now dropped to 812,745 as of Tuesday (23 June), which is 326,000 fewer than last week. This is because not many companies have opted to prolong their short-time regime, Labour Minister Christine Aschbacher (ÖVP) told a press conference.

Next steps in deconfinement to be discussed. Belgium’s National Security Council will meet on Wednesday (24 June) to discuss additional deconfinement measures set to go into force from 1 July. Amongst others, it will discuss whether social contact will be extended beyond the so-called “contact bubbles” of 10 other people per week, what kind of events will be allowed to take place this summer and whether cultural activities with audiences, such as cinemas or theatres, can restart. (Alexandra Brzozowski | EURACTIV.com)

Travel restrictions cautiously lifted. On Tuesday evening, the Finnish government decided to lift restrictions on travel and tourism to a number of EU and Schengen area countries starting from 13 July. However, the countries with whom border controls will be lifted have to meet certain criteria. EURACTIV’s Pekka Vänttinen looks into what these are.

Pubs re-open next week. Pubs, restaurants, hotels and hairdressers will re-open from 4 July in England, Prime Minister Boris Johnson announced on Tuesday (23 June) as part of the new phase of easing social restrictions. People will also be able to meet indoors and stay overnight with family and friends – with social distancing. Cinemas and museums will also be able to re-open. Also read: Trouble brewing for UK pubs with post-COVID distancing rules

The government believes that the coronavirus infection rate is under control, although cases are still higher than in France, Germany and Italy, and former chief scientific adviser Sir David King is among a number of scientists who have expressed concern that the lockdown measures are being eased too quickly.  (Benjamin Fox/EURACTIV.com)

New school guidelines. Italy’s education ministry released a series of guidelines on Tuesday to assist the relaunch of school activities in September. The guidelines issued by the government leave plenty of room for the regional administrations to adopt specific measures according to the health situation. EURACTIV Italy’s Alessandro Follis reports from Rome.

Borrell at Greek-Turkish border. EU High Representative for Foreign Affairs and Security Policy Josep Borrell will visit today (24 June) the border post at Kastanies, in northern Greece. According to Greek media, Borrell will discuss with Greek government officials the current situation with Turkey and particularly the latter’s growing aggressiveness in the last couple of months.

Israel seeks Cypriot help on EU opposition to annexation. The foreign ministers of Israel and nearby Cyprus met Tuesday (23 June) as the Jewish state seeks to defuse European opposition to its plan to annex parts of the occupied West Bank. Read more.

State aid in question. The European Commission opened on Tuesday (23 June) an in-depth investigation to assess whether the compensation of €282 million granted by the Czech Republic to Czech Post to fulfil its public service mission is in line with EU state aid rules.

Czech Post is the main postal operator in Czechia and is wholly owned by the state. The investigation comes after two competitors of the company filed complaints. (Ondřej Plevák | EURACTIV.cz)

Commission ‘irresponsible’ with imposing unfulfillable standards on farmers. “With its irresponsible attitude, the European Commission is jeopardising the 2022 agricultural subsidies simply to impose the unfulfillable environmental and climate protection standards set out in the Green Deal on farmers as soon as possible,” Agriculture Minister István Nagy told state news agency MTI on Tuesday. The Commission irritated member states with its firm opposition to having an interim two-year period before the next EU farming subsidies programme starts. Read more here.

Meanwhile, Hungary’s Central bank cut interest rates for the first time since 2016. The Hungarian central bank has lowered its base rate by 15 basis points from 0.9% to 0.75%, the bank said on Tuesday (23 June). The rate had been unchanged since May 2016.

The news follows yesterday’s decision to remove the editor-in-chief, Szabolcs Dull, from the publication’s management board after Dull warned on Sunday (21 June) of a planned overhaul that would jeopardise Index’s freedom to publish stories critical of Prime Minister Viktor Orbán’s government. “We do not yet see what follows from the departure of our CEO, who always stands up for the newspaper and the unity of the editorial board,” Dull wrote in an editorial on Tuesday. “But one thing we know for sure: we still insist on maintaining our editorial independence and keeping our staff untouchable,” he added.

Plagiarism, the plague of Slovak politics. Parliament Speaker Boris Kollár (We are family) has apparently plagiarized his master’s thesis, Denník N reported. Previously, representatives of the We are family party were very vocal in criticising the former Parliament Speaker Andrej Danko (Slovak national party) when he faced the same scandal with his dissertation thesis.

Meanwhile, Slovakia is against a default opening of the EU’s external borders and supports a gradual opening based on the epidemiologic situation, said Foreign Minister Ivan Korčok. Securing free movement within the Schengen area remains the country’s priority, he added. (Zuzana Gabrižová | EURACTIV.sk)

Prosecution orders agriculture minister to protect bees. The supreme administrative prosecutor’s office ordered Agriculture Minister Ivan Stankov and Executive Director of the Food Safety Agency, Dr Damyan Iliev, to take measures to protect bees from pesticide poisoning. A day ago, the appellate prosecutor’s office in the city of Veliko Tarnovo ordered a review of all the prosecutors’ refusals to initiate criminal investigations into the mass extinction of bees in the region for the past three years.

The prosecution appears to have acted following the latest investigation by EURACTIV Bulgaria’s Valya Ahchieva, who found links between the use of EU-banned pesticides and the extinction of bees in the area. Her investigations showed that the institution has taken no action so far. (Krassen Nikolov | EURACTIV.bg)

Should the PM self-isolate? Croatia is currently debating whether Prime Minister Andrej Plenković should self-isolate after being in close contact with Serbian tennis player Novak Đoković, who tested positive for COVID-19 during a tennis tournament in Zadar, Croatia. And this comes just two weeks before the country’s parliamentary elections on 5 July. Read more.

Slovenia, Italy presidents to attend reconciliation act on 13 July. The two heads of state, Borut Pahor and Sergio Mattarella, will attend a ceremony marking the return of Slovenian commercial and cultural centre in Trieste, Italy, to the Slovenian minority, 100 years after it was burnt down by Italian Fascists.

The two will later also commemorate the victims of Fascist and Partisan killings in Basovizza (Bazovica), a small settlement near Italy’s border with Slovenia, in a symbolic act that could lay to rest some of the 20th-century issues still burdening the two neighbours.

Croatian President Zoran Milanović, however, has cancelled his visit due to a fault on the government plane. EURACTIV Serbia has more.

In other news, Serbian President Aleksandar Vučić said in Moscow on Tuesday that he had a “cordial and good” meeting with Russian President Vladimir Putin and that he was “very pleased” with the discussion. Find out why by clicking here.