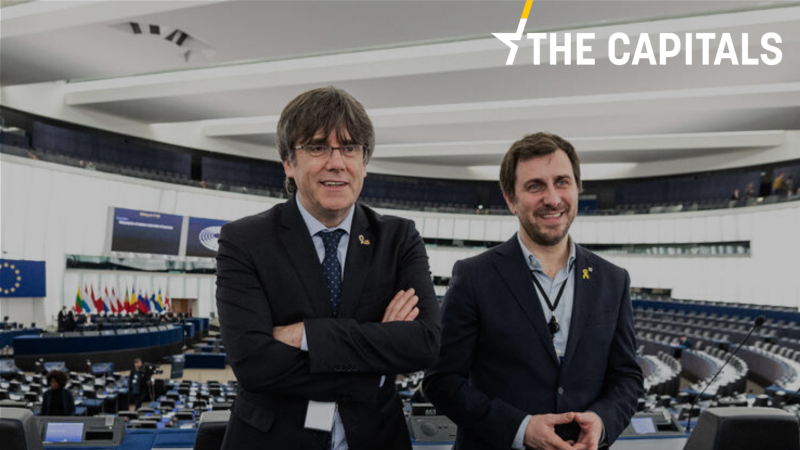 NOTE: Don’t forget to subscribe to the new Agri-Food Brief which launches this Thursday. Gerardo Fortuna and Natasha Foote will be bringing you a weekly update of the latest agricultural news including from Europe’s Capitals.

Before you start reading today’s edition of the Capitals, we invite you to read about the recent developments on EU’s Just Transition Fund.

Also, feel free to have a look at the article “Guy Verhofstadt ready to chair citizen consultations on Europe’s future” by EURACTIV.fr’s Aline Robert.

First disagreement within the new coalition. While a ban on headscarves for schoolgirls under 14 had already been agreed after the Greens reluctantly agreed to the conservative ÖVP’s proposal, the suggestion to also include teachers in the ban was quickly rejected by the Greens. Philipp Grüll has the story.

Fresh funding ideas to tackle climate crisis. Following the Commission’s disappointing announcements on the Just Transition Fund, French Socialist MEP and rapporteur for the 2021 budget, Pierre Larrouturou, has proposed to increase the budget to alleviate the climate crisis, but wishes to do so with a ‘German touch’.

Less brutal cuts. Flemish Minister-President Jan Jambon (N-VA), in charge of cultural policies, has announced the granting of just over €4 million in subsidies for cultural projects in Flanders, after initially only €3.4 million were to be distributed in two phases. The  measure, which mainly targeted emerging artists, had sparked major protests across the country. EURACTIV’s Alexandra Brzozowski has the details.

No corruption in Finland. Hmmm… In its latest research dating from 2018, Transparency International ranked Finland as the third least corrupt country in the world, after Denmark and New Zealand. But a new survey from December 2019 will raise a few eyebrows abroad. It certainly will in Finland – a country which likes to see itself as morally virtuous. Pekka Vanttinen has more.

Italy isn’t ‘safe’. A Swiss administrative court ruled that a Nigerian migrant woman with poor health conditions can’t be sent back to Italy under the asylum rules of the EU’s Dublin Regulation. That is because, according to the tribunal, Italy provides “low-quality services” for migrants in need of immediate medical care since Italy’s former Interior Minister Matteo Salvini  (Lega) approved “security” decrees, and it no longer considers the country’s reception centres to be optimal for “vulnerable” migrants. (Gerardo Fortuna | EURACTIV.com)

Scramble for Africa. The UK government will host an African investment summit next Monday (20 January) as it seeks to increase its trade and investment relations with the continent post-Brexit. South African President Cyril Ramaphosa will be among the attendees.

Although the governments of Boris Johnson and Theresa May have repeatedly promised that the UK will become the biggest G7 investor in the continent, African leaders, particularly in key UK markets Nigeria, Egypt, Kenya and South Africa, are expecting significantly more generous trade terms than those offered by the EU. The UK made significant concessions to South Africa in 2019 on talks to roll-over the existing EU trade deal, increasing quotas for South African exports of fruit and produce. (Benjamin Fox, EURACTIV.com)

General Election. The Irish general election will be held on Saturday 8 February, Prime Minister Leo Varadkar has announced. President Michael D Higgins has been instructed to dissolve Parliament while campaigning gets underway in the Republic.

But does the timing of the elections suit the current prime minister? EURACTIV’s Samuel Stolton takes a closer look.

Not that easy. According to Italian Commissioner Paolo Gentiloni, the brand-new Just Transition Fund could be used for the environmental conversion of Ilva’s ailing and polluting steel plant in the Puglia region, confirming what EURACTIV’s partner ANSA had anticipated on Friday (10 January). With Franco-Indian steel giant ArcelorMittal having called off the purchase of Ilva in December, decarbonising the plant could be tricky given that the investments needed to decarbonise the Italian steelworks company were estimated at €1.6 billion back in 2013. (Gerardo Fortuna | EURACTIV.com)

Spain pushes to prioritise services in EU-UK deal. Spain on Monday (13 January) called for the inclusion of services in the first phase of EU-UK negotiations on the future relationship, adding more complexity to trade talks that must be concluded before the transition period ends on 31 December. Jorge Valero has the story.
///

US says islands have EEZ. The Memorandum of Understanding recently signed by Turkey and Libya is “provocative” and “counterproductive” a State Department spokesman has said. The US official recognised that Turkey’s claims are contrary to international law, which states that the Greek islands have rights: areas regarding the Exclusive Economic Zone (EEZ) and the continental shelf.

Athens News Agency also quoted an official as saying that Washington’s approach to the matter with China closely monitors the US reactions to maritime law issues, which have an impact on South China Sea disputes. (Sarantis Michalopoulos | EURACTIV.com)

EU Council, Commission back Cyprus. The Croatian EU Presidency and the EU Commission chief have offered their full support to Cyprus over the “illegal” gas and oil drillings of Turkey off the coast of Cyprus. “It is very important to support Cyprus on this issue, we cannot accept Turkey’s behavior,” Ursula von der Leyen said.

Steady support for PiS and Duda. 37.3% of the Polish population support the ruling Law and Justice (PiS) party, while 26.9% back the largest opposition block (KO), according to a poll conducted by the IBRiS Market and Social Research Institute based in Warsaw.

But what about the presidential candidates? EURACTIV Poland‘s Łukasz Gadzała reports.

Ombuds(wo)man controversy. For the past few weeks, the Czech Republic has been dealing with the question of who is going to be the country’s new Public Defender of Rights, also known as the Ombudsman. President Miloš Zeman nominated current MP and former Justice Minister Helena Válková, which has sparked controversy among opposition parties.

Following their complaints about her past in the Communist Party and lack of impartially due to her political connections, she has stepped down as a candidate and the search for a new Ombudsman thus continues. (Ondřej Plevák | EURACTIV.cz)

Public education indicators. The Institute of Economics of the Centre for Economic and Regional Studies published a new wave of data related to public education in Hungary. While expenditure per student is increasing and reaching Western levels at upper secondary education, the country’s teachers are getting older and more of them do not have degrees in the subjects they teach.

Kuciak trial – day two. If Marián Kočner hadn’t had liaisons within the police and with ruling party Smer, the murder of Ján Kuciak might not have happened, said one of the intermediaries before the court on Tuesday in the case related to the journalist and his fiancee. “The whole thing would not have happened because I would not have been afraid to go to the police,” he said. The ruling will not be delivered before the general election due to take place on 29 February. (Zuzana Gabrižová | EURACTIV.sk)

Scientists file climate appeal. On Tuesday (14 January), representatives of 550 Croatian scientists filed an appeal calling on the government, the prime minister, parliament and the environment and energy ministry to take immediate action and declare the climate crisis as an emergency. They also called on all executive authorities to implement ambitious climate policies, involve scientists in the policy-making process and increase public awareness.

In other news, the Croatian Health Ministry presented its first national lung cancer detection programme for all active smokers between 50 and 70 years of age on Tuesday (14 January). This makes Croatia the first EU country to introduce nationwide screening for early lung cancer detection.

PSD against law changes. Romanian social-democrats are protesting against a potential change in the electoral law to allow two-round votes in the election of mayors. Bogdan Neagu reports from Bucharest.

Workers from Mongolia. Bulgaria has widened the geographic regions where it is looking for labour force from Moldova, Armenia, Georgia, Belarus and Ukraine to Tajikistan, Uzbekistan, Kyrgyzstan and even Mongolia. This became clear following explanations by the country’s social minister Denitsa Sacheva in Parliament. The negotiations held with the countries mentioned are presented as “a measure for social demographic policy”, writes SEGA, the partner newspaper of EURACTIV in Bulgaria. (Georgi Gotev, EURACTIV.com)

Slovenians back from Venezuela. With the ongoing economic and political crisis dragging on in Venezuela, the repatriation of Slovenians has been ongoing, with some having already arrived in Slovenia, while others may have to wait a little longer, according to the Office for Slovenians Abroad. Daily Dnevnik reported that six people – a family of four and a married couple – have already returned. (Željko Trkanjec | EURACTIV.hr)

Vučić vs Fajon. Serbia’s President Aleksandar Vučić said that Slovenian MEP Tanja Fajon of the Socialists and Democrats (S&D) group should worry more about the Serbs in her native Slovenia than about Serbia’s lowering of the election threshold. (EURACTIV.rs)

Stop building coal-fired thermal power plants. Janez Kopač, Director of Energy Community Secretariat, warned BiH authorities that they must stop investing in coal-fired power plants because the “16 thermal power plants in the western Balkans that do not have adequate filters and produce more sulphur dioxide and nitrous oxide emissions than the 250 existing throughout Europe”. Kopač added that as these kill 3,000 people and cost the countries in the region about €11 billion a year, BiH would not be taken seriously as a contracting party of the Energy Community.

Arab and Turkish investors are untouchable Center for Investigative Reporting (CIN) in Sarajevo uncovered that at least five complexes built by Arab and Turkish investors in the Sarajevo metropolitan area were illegal. They took advantage of the local system’s weaknesses and ignored orders to stop work and knock down buildings. Read the whole story here. (Željko Trkanjec | EURACTIV.hr)