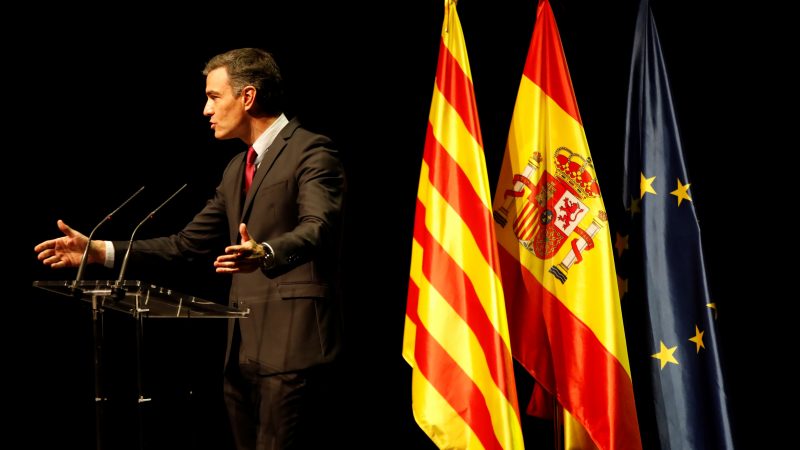 The pardons, which will release the leaders from jail, are conditional and a ban on the former politicians on holding public office remains in place. [EFE/Toni Albir]

Spain’s socialist-led coalition government has finalised controversial pardons for nine Catalan politicians jailed for their involvement in an unauthorised referendum and declaration of independence in 2017. EURACTIV’s partner EFE reports.

The nine politicians, including former regional vice-president Oriol Junqueras, were in 2019 sentenced to between nine and 13 years in prison for sedition and misuse of public funds.

The pardons, which will release the leaders from jail, are conditional and a ban on the former politicians on holding public office remains in place.

“This decision is the best for Catalonia, for Spain and the most aligned with the spirit of coexistence and concord,” Spanish Prime Minister Pedro Sanchez told a press conference following a four-hour cabinet meeting to approve the pardons.

“We will face challenges on the way, but it is worth trying […] we can no longer ignore each other,” he added.

The decision to pardon the Catalan leaders remains deeply divisive with the opposition and the Spanish public.

Opinion polls show more than 60% of the general public do not agree with the pardons. Right-wing parties opposed to Sanchez accused him of abandoning his previous position and said they would file an appeal before the Supreme Court to challenge the move.

Pro-independence parties have called for full amnesty and an independence referendum, while hundreds protested in Barcelona, saying the pardons were not enough to resolve the conflict with Catalonia.

But Sanchez says the move is a goodwill gesture and a necessary step for peace and reconciliation between Spain and Catalonia.

The events of 2017 brought Spain to the brink of a constitutional crisis. Then prime minister, Mariano Rajoy of the conservative Popular Party, activated a constitutional article that temporarily stripped Catalonia of its autonomy and dissolved its parliament.