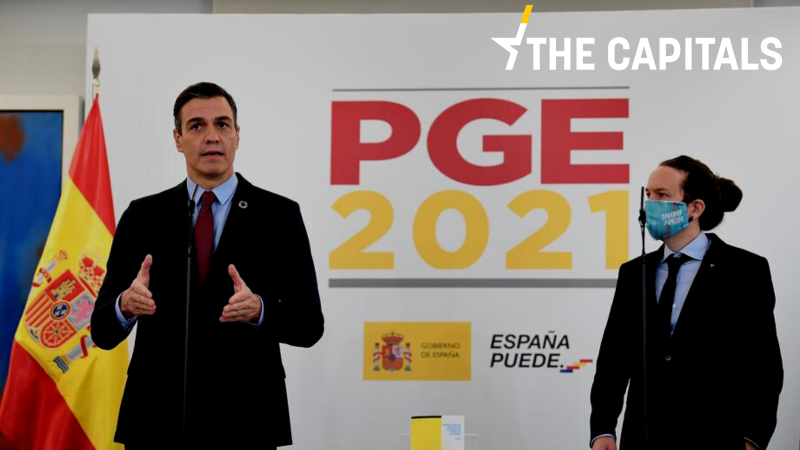 Before you start reading today’s edition of the Capitals, feel free to have a look at the article “Ahead of COVID summit, Council chief calls for coordination to avoid a ‘tragedy’“, by Georgi Gotev and Sarantis Michalopoulos.

Spanish government plans to tax the richest. Spain’s minority leftwing socialist government coalition of PSOE and Unidas Podemos (United We Can) is planning to implement a tax hike for high-income individuals and corporations in its new budget for 2021 presented on Tuesday (27 October), EFE reported. Prime Minister Pedro Sánchez and Vice Prime-Minister  and Unidas Podemos leader Pablo Iglesias detailed the new plan, which puts a big emphasis on the social policies required to alleviate the economic impact caused by the coronavirus. Read more.

Germany, France heading toward new ‘non-total’ lockdowns. The alarming spike in COVID-19 cases in Germany and France forces the two countries to take new restrictive measures to slow down the pandemic. In Berlin, Chancellor Angela Merkel eyes a “short and clear break” while in Paris, the government intends to impose another nationwide lockdown that would be different to the one imposed in March. Read more.

Belgium breaks COVID-19 hospitalisation record. A record number of COVID-19 patients (689) admitted to hospital was reported in Belgium in the last 24 hours. The previous record was on 28 March with 629 admissions, virologist Steven Van Gucht said on Tuesday, based on the daily report drawn up by the various hospitals in the country. Read more.

Viennese Mayor negotiates with liberals about coalition. Vienna’s Social Democrats (SPÖ) gave recently elected Mayor Michael Ludwig the green light to start coalition negotiations with the liberal NEOS. Seeing that negotiations are fruitful and a successful outcome is expected from both parties by mid-November, this could mean the end to Vienna’s ten-year era under SPÖ-Green rule, EURACTIV Germany reported. (Philipp Grüll | EURACTIV.de)

Slow progress on trade. The Department of International Trade has made little progress in supporting economic recovery following the first wave of the pandemic, or in advancing the UK’s future trading relationships, according to a report by UK lawmakers on the Public Accounts Committee. Read more.

State budget for 2021 to be approved by parliament. Portugal’s parliament is expected this Wednesday (28 October) to approve on first reading the government’s proposed state budget for 2021, amid a climate of uncertainty and political radicalisation that suggests it could be more difficult to secure the bill’s final approval next month. Read more.

Greece exceeds 1,000 cases daily. Greece reported on Tuesday a record-high of COVID-19 cases, reaching 1,259. Almost half are recorded in the region of Attica (295) and Thessaloniki (291). The active coronavirus cases nationwide amount to 7,134. More.

Poland signs anti-abortion declaration. The Polish government signed a US-sponsored anti-abortion declaration on Tuesday (27 October), joining a group of over 30 other conservative governments. The Geneva Consensus Declaration on “Promoting Women’s Health and Strengthening the Family” was adopted by 32 countries, including Uganda, Saudi Arabia, Egypt, Hungary and Belarus. Read more.

Opposition parties join forces. Leaders of the three centre-right parties – Civic Democrats (ECR), Christian Democrats (EPP) and TOP 09 (EPP) – formed an alliance for the 2021 general elections. “We want to give people hope that populism, empty words and lies will not rule this country,” said Civic Democrats leader Petr Fiala after he signed a memorandum on cooperation together with his new allies. (Aneta Zachová | EURACTIV.cz)

Weekend testing. Slovakia’s government announced on Tuesday details regarding the country’s plan to test the entire population for coronavirus which is now set to take place from early to late Saturday, meaning it will not last for three days as was originally announced. Read more.

EU funds fraud for billions. EU funds fraud in Bulgaria is comparable to the largest markets for organised crime such as human trafficking, drug trafficking and illegal fuel trade, according to the “Bulgarian Organised Crime Threat Assessment 2020“,  published by NGO Center for the Study of Democracy. Read more.

In other news, Bulgaria recorded a record rate of 2,243 new daily confirmed COVID-19 cases, 42 deaths and 7,659 patients on PCR tests on Monday at midnight (26 October), bringing the positive rate to 29,98%. New coronavirus measures will come into force on Thursday (29 October). While high-school and university students will have to study online, discos, piano bars, night bars and night clubs will be closed. Restaurants will stay open, however, as long as they follow anti-pandemic rules. (Krassen Nikolov | EURACTIV.bg)

Coalition partners support 2020 budget revision, 2021 budget. “Coalition partners are aware of the circumstances and how much the coronavirus has cost the state budget to date. The figure will go up to 28.5 billion kunas (€4 billion) by the end of the year. These are increased expenditures that we didn’t plan which are first and foremost intended for job retention and the health system”, said Croatian Finance Minister Zdravko Marić. Read more.

In the other news, Foreign Minister Gordan Grlić Radman met with Mufti Aziz ef Hasanović, the leader of Croatia’s Islamic community. While Radman pointed to the fact that the “63,000 Muslims who live in Croatia are ambassadors who can testify that Croatia is a safe country, respectable in respecting human, national, minority and religious rights.” For his part, Mufti Hasanović underlined that part of the Muslim community’s role is to “brand and promote the high standard that is developed in Croatia.” (Željko Trkanjec | EURACTIV.hr)

No referendum on defence spending. Slovenia’s parliament rejected the opposition’s motion for a consultative referendum on €780 million in additional defence spending planned for 2021-2026. While most opposition parties spoke of bad timing and of the need for voters to have a say, the coalition stressed the need to invest in the army, security and honour international commitments.

Meanwhile, Klemen Podobnik, Slovenia’s nominee for one of the country’s two spots at the EU’s General Court in Luxembourg, has been rejected by the Brussels committee vetting candidates, the STA found out from well-placed sources. Slovenia thus remains without a judge at the court and the call for applications will have to be repeated. (Željko Trkanjec | EURACTIV.hr)

Lavrov self-isolates, postpones visits to Belgrade and Sarajevo. Russian Foreign Minister Sergey Lavrov is now self-isolating after coming into contact with someone who tested positive for COVID-19, meaning all his remaining planned visits – including to Sarajevo and Belgrade scheduled for 28 and 29 October – have been postponed, Russia’s foreign ministry announced on Tuesday (27 October). Read more.

President Đukanović’s strong reaction. The misinformation published on the cover of Croatian weekly Nacional regarding the involvement of Montenegrin President  Milo Đukanović in the murder of Ivo Pukanić who was killed by a bomb placed under his car 12 years ago in the centre of Zagreb, represents the recycling of a lie launched eight years ago and denied by all actors immediately. Read more.