Spanish liberals under fire over pacts with far-right 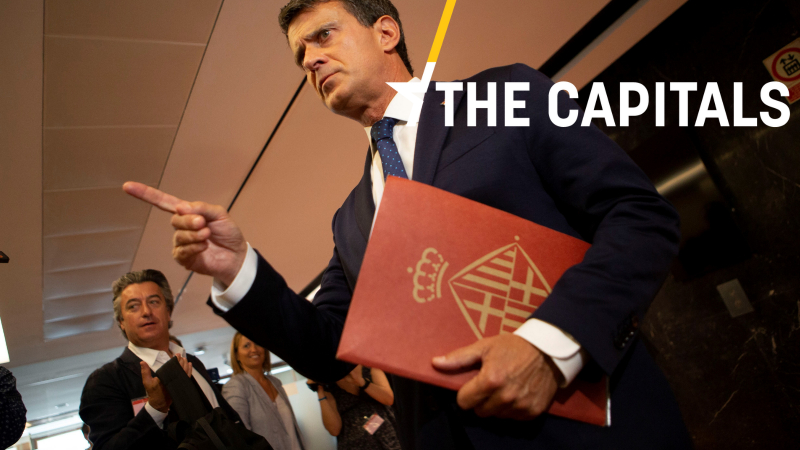 The Capitals is EURACTIV's daily newsletter from across Europe. [EPA/ENRIC FONTCUBERTA]

Valls attacks centrists after deals with far-right. Former French PM Manuel Valls fiercely criticised on Wednesday the centrist Ciudadanos (C’s) party for what he described as “serious drift” to extreme and “anti-European” positions because of -indirect- pacts forged between Cs and far-right Vox at regional and municipal level. According to Valls, himself a former Ciudadanos municipal candidate in Barcelona, C’s is following an “irresponsible” strategy with its approach to Vox, in particular in the Catalonia region.

“When I settled in Barcelona a year ago, Ciudadanos was a liberal, progressive and pro-European party, but little by little, the party with which I shared many things became something different: Citizens has become the party that now pacts in fact, with a reactionary and anti-European party, it is not worth hiding behind the PP (Popular Party),” Valls said at a press conference EURACTIV’s partner EFE reported.

In the meantime in Bucharest, this may cause early headaches to Dacian Ciolos, former EU commissioner and Prime Minister of Romania, who has been elected as leader of the liberal “Renew Europe” group (former ALDE) in the European Parliament. Ciolos, who led the list of Alliance 2020 USR PLUS, became the first Romanian to run a group in the EU Parliament.

In addition, the situation between the Romanian socialists and their EU family seems to get better. Rovana Plumb, former EU funds minister in the socialist PSD government, was elected as Vice-President of the socialist group (S&D) in the European Parliament.

Relations between the ruling socialist party and PES were “frozen” before the EU elections due to PSD’s attempts to weaken the anti-graft legislation and the rule of law. But after the poor showing in the elections and the jail sentence given to former PSD leader Liviu Dragnea, Prime Minister Viorica Dancila promised that her government wouldn’t make further changes to the justice laws. The election of Plumb, who has led the PSD list for the EU elections, as VP of the S&D group signals a de-escalation.

No COP26 in Belgium. Although the federal government in April formally approved a preliminary study on the organisation of COP26 in Belgium, the country has not been able to submit its candidacy to host it. Instead, the UK and Italy have reached a deal to co-organise it, a joint statement has confirmed. (Alexandra Brzozowski, EURACTIV.com)

MH17 crash. A Dutch-led joint investigation team tasked with assigning criminal responsibility for the downing of Malaysia Airlines flight MH17 over war-torn eastern Ukraine in 2014, killing 298 people, charged four suspects in the case and issued international arrest warrants for them. One was identified as Igor Girkin, a former colonel in Russia’s FSB intelligence service, who is believed to be the highest military officer in the area who was in direct contact with the Russian Federation. A court case will begin in the Netherlands on 9 March 2020. Read more(Alexandra Brzozowski, EURACTIV.com)

Rory out: International Development Secretary Rory Stewart is the latest candidate to crash out the race to be the UK’s next Prime Minister.

In a vote between Conservative Parliamentary Members on Wednesday, Stewart, who pledged to rule out the possibility of the U.K. exiting the EU without a deal, didn’t received the required number of votes to progress to the next round. The four candidates who progress include standout favourite Boris Johnson, Foreign Secretary Jeremy Hunt, Home Secretary Sajid Javid, and Environment Secretary Michael Gove. (Samuel Stolton, EURACTIV.com)

No Spitzenkandidaten. French President Emmanuel Macron is “no friend” of the Spitzenkandidaten process and there is a “systemic difference” between France and Germany on the issue, CDU leader Annegret Kramp-Karrenbauer said on Wednesday (19 June) after meeting Macron in Paris. (Claire Stam, EURACTIV.de)

France not enthusiastic over Mercosur deal. France is reluctant to sign the free trade agreement under discussion with Mercosur (Argentina, Brazil, Paraguay, Uruguay) fearing a surge of beef imports into Europe. Together with, Poland, Ireland and Belgium, France has sent a letter to the EU Commission to express its doubts over the deal.

“A trade agreement must be a sustainable development agreement”, a French diplomat said, adding that trade deals must be compatible with the Paris climate agreement.

Sarkozy in court over corruption. For the first time in history, judges will grill a French elected president for corruption, after Nicolas Sarkozy, lost his final appeal against going to trial. The trial is due before the end of the year. Read more: Sarkozy to go on trial after final appeal fails (Aline Robert, EURACTIV.fr)

Dialogue without abjuration. All efforts of the Italian government are directed to avoid the excessive deficit procedure, said Prime Minister Giuseppe Conte, addressing the upper house before today’s EU summit. “However, we are fully convinced of our political economy,” he added. Conte also confirmed he will claim a “front line” economic portfolio for the Italian Commissioner, “consistent with Italy’s role in history.” (Gerardo Fortuna, EURACTIV.com)

A plan to prevent Turkey’s drilling. Greek Prime Minister Alexis Tsipras said in a TV interview that Greece has a plan for preventing any Turkish gas-drilling attempt within its Exclusive Economic Zone (EEZ), between the Greek island of Kastellorizo and Cyprus. “We won’t allow [Turkish President Recep Tayyip] Erdogan to drill in Greece’s EEZ,” Tsipras said, expressing also his satisfaction about the US-EU support on the issue. “I will speak with Erdogan if necessary, but we’re not there yet.” (Theodore Karaoulanis, EURACTIV.gr)

Read more on EURACTIV’s partner Athens-Macedonian News Agency: PM Tsipras: Turkey’s moves are an indication of its weakness and isolation in the region

Meanwhile, Turkey plans to inhabit the last iron-walled city of Europe. The administration of the Turkish-occupied northern part of Cyprus decided to open Varosha, an abandoned, iron-walled southern quarter of the Cypriot city of Ammohostos (Famagusta), for settlement. A Turkish official said they would evaluate the conditions for action since the town “is legally a military zone”.

Famagusta, once a praised tourist destination and biggest harbour of Cyprus, is referred to as a ‘ghost city’ having been abandoned since 1974, when the Turkish army invaded the island. The city is protected by two UN Security Council resolutions, stating that only its original inhabitants can resettle there and asking Turkey to pass over city administration to UN Peacekeeping Force. (Theodore Karaoulanis, EURACTIV.gr)

North Macedonia/Albania. Four former Foreign Ministers – Ditmir Bushati of Albania, Daniel Mitov of Bulgaria, Nikos Kotzias of Greece, and Ioannis Kasoulides of Cyprus – have called on the EU to begin accession talks with North Macedonia and Albania immediately, according to the Independent Balkan News Agency(IBNA).

Still tough on Russia. Polish Foreign Minister Jacek Czaputowicz said that Warsaw supported the prolongation of sanctions on Russia for the annexation of Crimea and its actions in East Ukraine. He also suggested that the sanctions should be renewed every year, not every six months as it is now. Czaputowicz proposed that people responsible for issuing Russian passports to Ukrainian citizens in Donbas should be sanctioned too.  (Łukasz Gadzała, EURACTIV.pl)

Šefčovič confirmed. Maroš Šefčovič´s nomination to the next European Commission was officially confirmed by the government on Wednesday. “I think that at this point, we don’t have anyone who enjoys more confidence in the EU parliament,” František Ružička, State Secretary at the foreign affairs ministry, said. (Zuzana Gabrižová, EURACTIV.sk)

Eyeing another job. Czech MEP Jan Zahradil (Civic Democrats) has been nominated as the ECR candidate for the President of the European Parliament. Zahradil also ran as the leading candidate of the group in the May elections. (Ondřej Plevák, EURACTIV.cz)

3,000 more foreign workers. The Croatian government has decided to increase the quota for foreign workers in the tourism sector by 2,000 and by 1,000 in the construction sector. The move came following a request by employers who have warned that labour shortage could undermine the tourist season (more at EURACTIV partner’ Jutarnji list).

Croatia’s tourist industry accounts for almost 20% of GDP. The opposition grabbed the opportunity to attack the government saying it is responsible for tens of thousands working age people leaving Croatia. (Željko Trkanjec, EURACTIV.hr)

Privatisation of biggest bank complete. Slovenian State Holding (SDH) announced that it has sold 10% of NLB shares to institutional investors for a total of €109.5 million. With this act, the privatisation of the largest Slovenian bank is completed: 65% of shares were sold last year. The EU Commission urged Slovenia to privatise the banking sector after Ljubljana got permission to use €4.8 billion from its budget to save the banking sector in 2013 during the financial crisis. (Željko Trkanjec, Euractiv.hr)

Western Balkans economies need two centuries to catch up with EU. The European Bank for Reconstruction and Development (EBRD) Director for the Western Balkans, Zsuzsanna Hargittai, said the countries of the region would need almost two centuries to reach an average income of the EU member states if they continue to progress at such a low growth rate. (beta.rs, EURACTIV.rs)