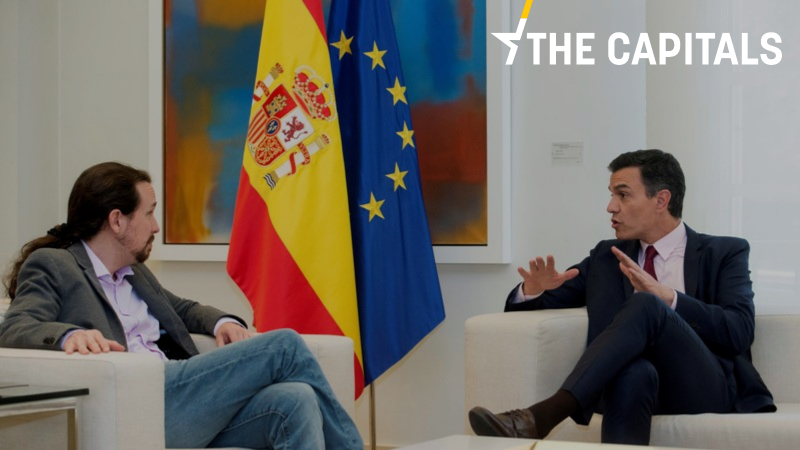 The Capitals brings you the latest news from across Europe. [EPA/ Luca Pergiovanni]

In an effort to break the political stalemate, acting Vice President of the government, Carmen Calvo, on Tuesday offered leftist Unidas Podemos (United We Can) to “share a broader and more realistic” joint political program to allow the formation of a stable government in Spain, EURACTIV’s partner EFE reported.

The socialist PSOE party, which won April’s general elections but without an absolute majority, has been exploring ways to govern with the backing of Unidas Podemos to avoid a run-off. Negotiations during the summer failed and they now have until the end of September to come up with a result.

Acting Prime Minister Pedro Sánchez has rejected the idea of a formal coalition government with Unidas Podemos, after the latter turned down a comprehensive offer made by PSOE in July.

Calvo asked Podemos “not to close the door again to the investiture” of Sánchez and added: “Not everything is black and white, the government of coalition or elections […] there are other possibilities”, she said.

Meanwhile in Rome, the negotiations between the centre-left Democratic Party and anti-establishment Five Star Movement are ongoing. Today, President Mattarella will complete the second round of talks with the parties, deciding whether to assign a mandate to form a government. However, Five Star activists could blow a potential coalition up, as they will have their say through the party’s e-voting platform Rousseau next week.

In a tweet, US President Donald Trump publicly endorsed the re-appointment of Giuseppe Conte as prime minister, though he managed to misspell his name (“Giuseppi”).

Trump said Conte is “a very talented man” who “represented Italy powerfully at the G-7.” The tweet surprised commentators, given that Trump has always been considered closer to Lega’s  right-wing leader Matteo Salvini.

In Bucharest, the socialist government (PSD) is trying to find its feet following the decision of the liberal junior coalition partner ALDE to leave the governing coalition.

Three liberal ministers have already resigned, while Ramona Manescu, a former MEP and current foreign minister, has decided to stay on.

Prime Minister Viorica Dancila has said that despite the turmoil, the government will continue. However, the opposition is already preparing a no-confidence vote.

No-Deal opposition gains momentum. A cross-party section of opposition MPs have banded together to stand against Prime Minister Boris Johnson’s fallback plan to leave the EU without a deal on October 31. Talks between Lib Dem leader Jo Swinson, the Green’s Caroline Lucas, Westminster leader of the SNP Ian Blackford and Labour leader Jeremy Corbyn took place on Tuesday, in a bid to devise plans to block the UK leaving the EU without a deal.

A spokesperson for the Tory-led government accused the leaders of “seeking to sabotage the UK’s position” in talks with the EU. Swinson said on Tuesday that ideally, an extension to Article 50 would take place with a view to holding a confirmatory second referendum. However, the group also said that using a vote of no confidence in the government remained an option. (Samuel Stolton, EURACTIV.com)

Meanwhile, Bulgarian PM Boyko Borissov has spoken by phone with Johnson, Borissov posted on Facebook. His press service said the call was at Johnson’s request, and that the two focused on common operations against organised crime and drug trafficking. Regarding Brexit, Borissov has reportedly emphasised the large number of Bulgarians in the UK, and of UK citizens in Bulgaria. Borissov invited Johnson at the Western Balkans summit under the Berlin Process, and Johnson has invited Borissov to visit the UK. (Georgi Gotev, EURACTIV.com)

Rethinking Russia strategy. French President Emmanuel Macron put great emphasis on Russia during his annual speech to the ambassadors. “Europe will disappear” if it fails to rethink its strategy, especially with regard to Russia, he said.

Considering that the United States, Russia and China are engaged in a struggle for power, Macron said Europe could either decide to be a “minority allies of one or the other, or take its share of the game”.

“We cannot rebuild Europe without rebuilding a link with Russia, otherwise Russia will move closer to other powers,” he said, a few days after welcoming Vladimir Putin to the Fort of Brégançon, an invitation which drew criticism in some quarters. (EURACTIV.fr)

The Federal Statistical Office published on 27 August its half-yearly report on public budgets, which showed that Germany has so far achieved a €45.3 billion surplus in 2019. The state continues to benefit from favourable employment trends, the report states, meaning that for the time being, the economic slowdown has not reached the labour market. The Statistical Office  struck a cautious note, adding that the results from the first half of the year only allowed “limited conclusions to be drawn about the annual result”. (Claire Stam,EURACTIV.de)

The company tried earlier this year to sell some major coal plants without any result. The energy ministry is now exploring ways how to avoid increasing electricity prices.

The leftist opposition Syriza party says the government wants to sell out the company “cheap and overnight” and has called on New Democracy to start by first paying its own debts to the PPC. (Theodore Karaoulanis, EURACTIV.gr) and Sarantis Michalopoulos, EURACTIV.com)

Electricity production from natural gas. Cyprus will be able to generate electricity by using natural gas by the end of 2021. Natural Gas Public Company Chairman Symeon Kassianides confirmed yesterday that the Cyprus’ Electricity Authority and three other licensed companies would generate power by using gas. The cost will be around €300 million, a third of which will be EU-funded, and delivered by a consortium composed of two Chinese, two Greek and a Norwegian company. Cyprus urgently needs to shift from diesel-fueled electricity production to lower emissions before a 2020 EU deadline.(Theodore Karaoulanis, EURACTIV.gr)

No deficit? Poland’s government unveiled a budget plan for 2020, in which no deficit is projected. If the government’s assumptions become a reality, it will be the first balanced budget since the 1989 revolution. (Łukasz Gadzała), EURACTIV.pl)

Hungarian parties out of parliament? Two political parties that have traditionally represented the Hungarian minority in Slovakia (around 10%) – SMK and Most-Híd (both centre-right EPP) – will not join forces before next year’s general elections, even though a pact would radically increase their chances of gaining seats in the parliament.

Polls show that both have little chance to pass the 5% threshold on their own. (Zuzana Gabrižová, EURACTIV.sk)

Low-cost presidency. It’s common knowledge that Czech PM Andrej Babiš wants to reduce the cost of the Czech EU presidency in 2022 to a bare minimum. Daily Hospodářské noviny reported that Babiš has now refused all demands made by ministries for additional funding, and also plans to hire fewer experts than even the EU’s smallest country, Malta, employed for its presidency, drawing the criticism of the opposition. (Ondřej Plevák, EURACTIV.cz)

Serbia deserves EU membership. Slovenian Prime Minister Marjan Šarec, who was in Belgrade on Tuesday, said Serbia deserves to become part of the EU family. “It will not happen overnight, but reforms need an incentive,” Šarec said. Her Serbian counterpart Ana Brnabić thanked Ljubljana for its support and commented, “Slovenia never had any special conditions regarding the opening of negotiation chapters.” said Brnabić. (Željko Trkanjec, EURACTIV.hr)

Avoiding a recession. While countries around the world fear a possible economic recession, in the first half of this year, Lithuania’s GDP grew by 4.2%, including industry and investments. According to Swedbank, Lithuanian GDP will grow by 3.2% this year and by 2% next year, due to increased internal demand resulting from increased salaries, employment and migration. (Angele Kedaitiene, EUnewsLithuania.com)

15 countries revoke recognition of Kosovo, Serbia says. With Togo becoming the fifteenth country to revoke its recognition of Kosovo, according to Serbia’s foreign minister, Belgrade  says that it has moved closer to its goal of having half of UN member states not recognising the independence of its former province. Read the story