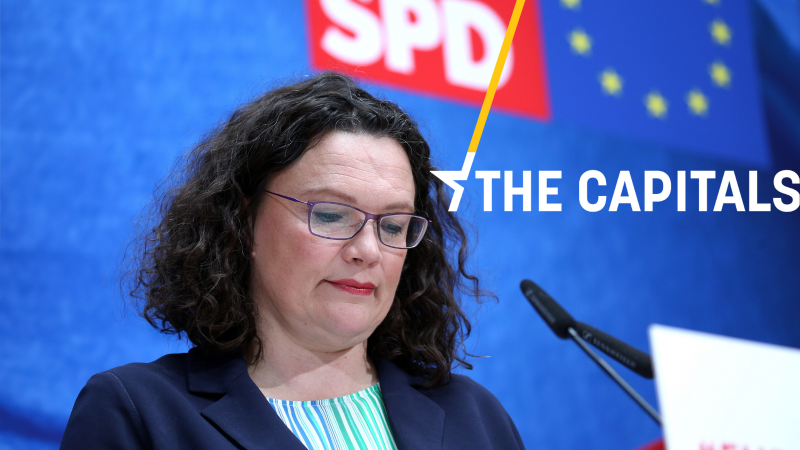 The Capitals is EURACTIV's daily newsletter from across Europe. [EPA/OMER MESSINGER]

‘GroKo’ in turmoil. Social Democratic Party (SPD) leader Andrea Nahles shook German politics on Sunday (2 June), when she announced her resignation. The move followed the dramatic results of the EU elections last week as well as local elections in the northern state of Bremen, a social-democrat bastion for over 70 years, which will now be run by a conservative.

It is a major blow to the current and largely unpopular grand coalition between the conservatives of the CDU/CSU (EPP) and the SPD. Voices within the SPD have already called for a halt of the ‘GroKo’ as the grand coalition is dubbed in Germany. But both CDU leader Annegret Kramp-Karrenbauer and Chancellor Angela Merkel said the alliance should continue.

This is no surprise as both CDU leaders want to prevent new elections: according to a poll published the day before, the Greens have for the first time in their 40 years of existence become the top political force in the country, overtaking the CDU/CSU.

Udo Bullmann, leader of Socialists and Democrats (S&D) in the European Parliament, told EURACTIV.de that Nahles’ decision and the “annoying” results are not impacting the forming of the EU socialists’ new group. He added that they still emerged as the second largest group in the Parliament.

Bullmann also said that the future agenda of the new S&D group would focus on climate change and a just transition to a low-carbon economy.

He added that Nahles committed to the SPD with “great strength and passion”. “Her decision deserves respect and recognition. The party committees will now discuss how content and personnel will continue for the Social Democratic Party in Germany. I appeal to everyone involved to act calmly and stay united.”  (Claire Stam, EURACTIV.de)

Meanwhile, a resignation also took place in France this weekend. Laurent Wauquiez, the head of the right-wing Les Republicains party (LR) has announced his resignation following the poor EU elections results, in which the EPP member party scored a record low 8%.

Instead of blaming Bellamy who led the party’s list, a lot of party members accused Wauquiez of having adopted a hard right stance. In an effort to save their job in light of the municipal elections next year, a few mayors already left LR since last week to join Macron’s LREM. (Aline Robert, EURACTIV.fr)

In Athens, Evangelos Venizelos, a former Greek Socialist party leader and deputy PM, has suddenly decided to quit the party, accusing its leader Fofi Gennimata of aiming to turn the Greek socialists into an adjunct of the ruling Syriza party.

Ahead of the 7 July national elections, the move is expected to bring about political developments, considering that Syriza has been calling for the creation of a left-wing progressive coalition to halt the rise of conservative New Democracy (ND-EPP), which clearly dominated in the local and regional elections this weekend. (Sarantis Michalopoulos, EURACTIV.com)

The main opposition party won in 12 out of 13 regions and only the region of Crete remained in the hands of Syriza and the Movement of Change (Socialists). In Athens, Costas Bakoyiannis, nephew of ND leader Kyriakos Mitsotakis, was elected as the youngest ever mayor. Turnout fell to 40%, compared to 60% in the first round a week ago.

“In politics as in life, it is important to know how to win and to know how to lose,” PM Alexis Tsipras said. ND leader Kyriakos Mitsotakis urged the voters to keep up the fight for a “major political change” in the next national elections. (Theodore Karaoulanis, EURACTIV.gr)

Trump in No Deal advice. US President Donald Trump has said the UK should prepare for leaving the EU without a deal, adding that Brexit Party leader Nigel Farage should play a role in the government’s talks with Brussels. In an interview with The Sunday Times, Trump said that the EU had been left “with all the cards” following Theresa May’s negotiations with the EU. He also said that former Foreign Secretary Boris Johnson would be an “excellent” Conservative party leader.

Meanwhile, the former Universities Minister Sam Gyimah has become the 13th candidate for the Tory leadership. He is the only so far to call for a second Brexit referendum. UK Labour opposition leader Jeremy Corbyn accused Trump of interfering with UK politics. (Samuel Stolton, EURACTIV.com)

Confederalism debate revived? “I predict six months and probably new elections,” former CD&V MP (EPP) Eric Van Rompuy told De Zondag, suggesting that the Belgian parliament will need to make a major constitutional revision, so that confederalism, advocated by Flemish separatist parties, can be debated. “Elections will then take place, with the challenge of Belgium’s survival. If the blockage is total, I do not see any other option,” he said.

Meanwhile, Walloon energy minister Jean-Luc Crucke (MR) rejected the confederalism idea, saying “the solution is a Belgium with four regions” which are “on equal footing and able to work together”. (Alexandra Brzozowski, EURACTIV.com)

The idea is to take into consideration future market shares of international competitors and not only EU ones, on a long-term basis, to protect what is left of the EU’s industry. The report also points out the need to revamp trade agreement policies and many ideas to soften competition policies. The Alsom-Siemens merger failure is still an open wound for Paris. (EURACTIV.fr)

EURACTIV’s partner EFE interviewed Vestager, who said EU liberals had a target of 50% women quota in the new Commission. The liberal Spitzenkandidat said a woman “has been missing for a long time” as head of the Commission.

“We women are not a minority, we are half of the population”, Vestager said. (EuroEFE.EURACTIV.es)

Cruise ship crash. A 65,000-ton cruise ship smashed into a tourist boat on one of Venice’s busiest canals on Sunday. Four people were injured, the Veneto region’s governor reported.

Cruise ship traffic into Venice’s lagoon is a long-standing issue in Italy. Right-wing Lega blamed its coalition partner Five Star Movement for having blocked an alternative plan for the berthing of ships. (Gerardo Fortuna, EURACTIV.com)

European Coalition comes to an end. The anticipated breakup of Poland’s pro-European coalition has become a reality. The rural centrist Polish People’s Party (PSL/EPP) has said it will form a Polish Coalition and added it stands ready to cooperate with other like-minded centrist and moderate forces. It’s not clear yet what parties or movements it will attract, but PSL has started to court local authorities and mayors. It also remains unclear where Donald Tusk stands, in case he decides to return to Polish politics.  (EURACTIV.pl)

Breakup of Amsterdam coalition? The Croatian Pensioners’ Party, a member of the Amsterdam coalition, an electoral alliance of centre-left liberal political parties in Croatia, announced it would leave it, Jutarnji list reported. The coalition elected only one MEP, Valter Flego from IDS – ALDE. There are rumours that IDS will leave it as well. The coalition leaders will meet this week to discuss its future.

Revising history. The communist party in the Russian Duma has proposed a law that would characterise the occupation of Czechoslovakia from 1968 as justified and give the soldiers involved the status of veterans. Slovakia’s foreign ministry reacted, saying that any attempts to legitimise the invasion are unacceptable. Slovak PM Pellegrini plans to discuss the issue during a visit to Moscow this week. (Zuzana Gabrižová, EURACTIV.sk)

Czech PM fully exposed. A leaked European Commission draft audit report suggests that the Czech Republic may have to return €17 million in EU subsidies. The Agrofert business group, which is linked to PM Andrej Babiš, received this money.

The report noted that Babiš has a conflict of interest because he still has influence on Agrofert through trust funds and he, being the prime minister, also has an influence on the use of EU funds. On top of that, it also points out that Agrofert benefitted from the transfer of huge sums between individual subsidy programmes and gained several hundred million crowns thanks to various tricks and indulgence of state inspectors.

Babiš said he did not break any law and the Czech Republic would return nothing to Brussels. Several opposition parties are considering triggering a no-confidence vote in his government.(Ondřej Plevák,EURACTIV.cz)

Pope visits Romania. Pope Francis finished his three-day visit to Romania on Sunday by asking for forgiveness, in the name of the Catholic Church, from the Roma people ”for all those times in history when we have discriminated, mistreated or looked askance at you”. Addressing tens of thousands of people in Transylvania, the Pope said ethnic Hungarians and Romanians should put their troubles behind and “live together as brothers and sisters”. (EURACTIV.ro)

Journalists under attack. A number of journalists have been targeted in recent days. Investigative journalist Rossen Bossev from ‘Capital’ weekly has received a fine for what a court considered “slander”. A group of journalists from Netinfo complained about being under pressure. “New Broadcasting Group”, purchased by oligarch Kiril Domuschiev and his brother Georgi earlier this year, owns a 70% share in Netinfo.

Other journalists from Nova TV, also owned by the Domuschiev brothers, were offered new contracts, which basically allow their employer to use their journalistic work only if it suits them. [More] (Georgi Gotev, EURACTIV.com)

Trust in media. Bulgarians trust mostly television, while the written press is the least trusted media, according to a European Broadcasting Union study. (Dnevnik.bg)

Vučić shocked by EU silence. Serbian President Aleksandar Vučić has said he is “shocked” by the EU’s silence over a statement made by Kosovo President Hashim Thaçi, who opposed the forming of the Association of Serb Municipalities.

“The Brussels Agreement was not signed by Saint Peter, rather by Catherine Ashton, let the EU say that it cannot guarantee the implementation of agreements, that such agreements have no legal power,” said Vučić. (Beta-EURACTIV.rs)