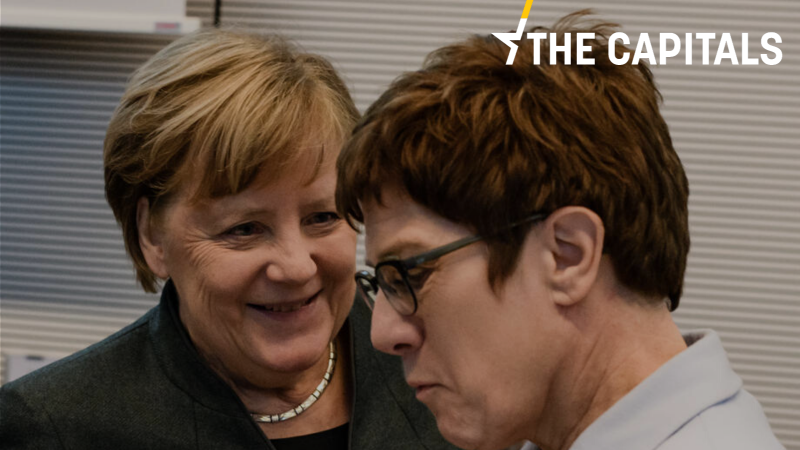 The first two names circulating were the two men who ran against her in the last election for party chair: Health Minister Jens Spahn, and former parliamentary group leader, Friedrich Merz. [EPA/CLEMENS BILAN]

Before you start reading today’s edition of the Capitals, we invite you to read an interview with Environment Commissioner Virginijus Sinkevičius conducted by Gerardo Fortuna: “Dealing with PFAS chemicals in revised tap water rules was a ‘great move’”

BERLIN. With the announcement that CDU leader Annegret Kramp-Karrenbauer intends to step down, theories about her successor, as well as the party’s next candidate for the chancellorship, which will be decided at the party congress in December, have been running wild. EURACTIV Germany’s Sarah Lawton has more.

5G debate is heating up. With regulator Arcep due to decide by the end of February which operators are the candidates for the new generation of 5G telecommunications, the debate on whether Huawei’s equipment should be used to deploy 5G is starting to become lively. What did the Chinese embassy say? EURACTIV France reports.

Israel summons Belgian envoy over UN invite to activist. Israel has again summoned a Belgian envoy for a ‘very harsh’ rebuke over his country’s push to have civil society activist Brad Parker, seen by Tel Aviv as biased against the Jewish state, address the UN Security Council in a debate scheduled for 24 February. EURACTIV’s Alexandra Brzozowski has the full story.

Chancellor Kurz softens stance on EU budget. Although Austrian Chancellor Sebastian Kurz (ÖVP) has repeatedly said that contributing more than 1% of national GDP towards the EU budget would be “unacceptable” for his country, the conservative chancellor softened his stance yesterday (11 February).

Just nine days away from a summit where EU Council President Charles Michel wants member states to agree on an EU budget, Kurz told Austrian web-channel oe24.tv that the current negotiation range lies “between 1 and 1.11%”, and that he is optimistic that there will be a good result in the end. However, he still insisted that 1.11% would still be too much of a burden for Austrian taxpayers. (Philipp Grüll | EURACTIV.de)

Minimum wage divides the nation. Following European Commission President Ursula von der Leyen’s campaign pledge of introducing a common minimum wage framework and her follow-up announcement in January stating that a statutory minimum wage would not be forced “in countries with high coverage of collective bargaining and where wage setting is exclusively organised through it”, Nordic countries, which rely on a traditional system of collective bargaining between employers and employees, started to question themselves. In Finland, a poll carried out by news magazine Uutissuomalainena in January shows that citizens are divided on these issues.

Commonwealth in crisis. The British government has suspended its funding of the Commonwealth Secretariat, the body that runs the international organisation from London, as the crisis engulfing the institution, which brings together many of Britain’s former colonies deepens. The BBC reports that Britain’s annual £4.7m voluntary contribution will be withheld until her secretariat improves its financial procedures in the wake of an auditing scandal. Baroness Scotland, the former Labour minister who is the Secretary General, is accused of awarding a lucrative contract to the company of a personal friend. (Benjamin Fox, EURACTIV.com)

Government composition. Irish political parties have been jockeying for influence in the first round of talks following Saturday’s general election in which Sinn Fein came out as the biggest winners, obtaining almost a quarter of first preference votes. EURACTIV’s Samuel Stolton has more.

Schengen not affected by coronavirus (for now). For the time being, restricting freedom of movement within the Schengen area due to the novel coronavirus is not justified, says Italian Health Minister Roberto Speranza.

In a hearing before parliament, he also pointed out that between 5 and 10 February more than 5,000 flights and a total of 620,000 passengers were checked in Italy. At the end of January, Italy’s government approved an order to suspend all flights from and to China. “The flight ban will remain in effect until the scientific community will report a decline in the number of infections,” Italy’s foreign affairs minister Luigi Di Maio said. (Gerardo Fortuna | EURACTIV.com)

Barcelona won’t cancel Mobile World Congress despite coronavirus fears. Barcelona’s city council stressed there the Mobile World Congress (BMWC), which is due to start in the Catalan capital on 24 February, will go ahead as planned, despite the coronavirus crisis and the cascade of cancellations of tech giants like Sony, Amazon, LG, and ON TUESDAY Intel and the Chinese tech company VIVO, EURACTIV’s partner EuroEFE reported.

Attorney General suspends controversial law threatening the autonomy of prosecutors. Portugal’s attorney general (PGR) has suspended a controversial law that determines that the hierarchy of the Public Prosecutor’s Office may intervene in criminal cases, “modifying or revoking previous decisions” and requested a supplementary opinion to the Advisory Council.

The President of the Republic, who appoints the PGR on the proposal of the Prime Minister, said on Tuesday that the Attorney General took an important step by requesting a new opinion and suspending the directive. [Susana Oliveira and Inês Escobar de Lima, Lusa.pt]

In other news, Portugal’s Public Prosecutor’s Office has requested the seizure of the bank accounts held by controversial Angolan businesswoman Isabel dos Santos, following a request for international judicial cooperation from the Angolan authorities.

Plan to strip citizenship of golden passport holders stalls in legal vacuum. A legal technicality has led Cyprus to temporarily halt a process to strip citizenship from 26 individuals who benefitted from a secretive passports-for-investment scheme, lawmakers said on Monday (10 February). Read more.

How to prosecute hate speech? Around 100 state prosecutors will attend a special seminar organised by the country’s General-Prosecutor, Pavel Zeman, on how to recognise and prosecute hate speech crimes, following his agreement with the Organisation for Security and Cooperation in Europe (OSCE).

Against the conditionality of EU funds. According to the latest poll, 47.2% of Poles oppose linking EU funds to the rule of law criteria, while 41.3% think otherwise. More than 11% do not have an opinion on the subject. (Łukasz Gadzała | EURACTIV.pl)

Teachers and professors protest the new national curriculum. Humanities and literature departments of public universities across the country have written a protest letter demanding that new changes to the national curriculum which critics claim is too ideological be withdrawn, Index reports. EURACTIV’s Vlagyiszlav Makszimov has more.

In other news, the Hungarian ambassador to Peru has been fired over child pornography charges. Back in April last year, the Hungarian ambassador to Peru, Gábor Kaleta, was removed from service, brought home, and would soon face trial, as more than 19,000 child pornography photos had been found on his devices. EURACTIV Croatia’s Željko Trkanjec digs deeper.

Also, according to Foreign Minister Péter Szijjártó, the UN wastes money on facilitating migration that poses a danger to the entire world, instead of spending it on the fight against terrorism. During the counter-terrorism conference in Vienna, Szijjártó also said that promoting migration in the world presented “a very serious threat to the whole of humanity”, noting that the UN’s Global Migration Compact encourages people to leave their homelands, which, in turn, endangers the regions and nations through which they travel. (Željko Trkanjec | EURACTIV.hr)

Deal with Gazprom. Bulgaria expects a good deal with Gazprom for a large reduction in prices for Russian gas imports. This is reported to the Bulgarian state gas company Bulgargaz. “Expected by the end of February 2020 the two sides will agree and the price of natural gas for the Bulgarian market will be significantly reduced,” the statement said. Bulgaria insists on reducing Gazprom’s prices by about 30%, with one of the country’s key arguments in the negotiations being the option to resume the antitrust case that the European Commission was pursuing against Gazprom. The case was stopped after the two sides reached an agreement. (Krassen Nikolov | EURACTIV.bg)

In other news, more than two-thirds of Bulgarians reject military intervention in support of a NATO ally facing a potential Russian attack. Among the countries surveyed by the Pew Research Centre, Bulgaria is the one with the highest share of people preferring ties with Russia over those with the US. Most Bulgarians do not agree that military force is sometimes necessary to maintain order in the world, according to the survey. (dnevnik.bg)

The central bank sees lower inflation. Romania’s central bank expects slower price growth in 2020, after it announced a minor revision of its end-year inflation forecast rate. The central bank now sees the inflation rate at 3% at end-December, down slightly from 3.1% predicted before, as prices are expected to fall in spring, governor Mugur Isarescu said on Tuesday. Romania posted the second-highest inflation rate in the EU in 2019, at 4%, after Hungary’s 4.1%. (Bogdan Neagu, EURACTIV.ro)
///

The beginning of the end for Zagreb’s mayor. Deputies of Zagreb’s City Assembly have overwhelmingly rejected draft amendments to the controversial urban development plan (GUP) which would pave a path towards the so-called “Zagreb Manhattan”, which has been opposed by numerous experts, citizens and opposition lawmakers.

EURACTIV Croatia’s Tea Trubić Macan looks into how the rejection affected the stability of Prime Minister Plenković’s coalition and put the future of mayor Milan Bandić in danger.

Outgoing Croatian president’s last official visit to be to Slovenia. Although the office of Croatian President Kolinda Grabar-Kitarović did not confirm the place or time of the meeting between the two presidents, the office of Slovenian President Borut Pahor has said that this would be an informal and working meeting as part of “the culmination of the pair’s intense dialogue”. This will be their 39th meeting and they will have a working lunch and brief walk through Ljubljana. (Željko Trkanjec | EURACTIV.hr)

In other news, a media closely linked to Hungary’s ruling party is now under investigation. Police have confirmed that the National Bureau of Investigation (NPU) is conducting pre-trial proceedings regarding the financing of certain media affiliated with the SDS (EPP) party, which is supposed to be funded by a Hungarian businessman who is closely linked to Hungarian Prime Minister Viktor Orbán’s Fidesz party. On Twitter, SDS President Janez Janša told Darko Muženič, director of NPU,  that “billions of euros were laundered in the state-owned NLB, and he is now investigating the media that reported on his ‘work’.” SDS has repeatedly denied unauthorised financing from abroad. (Željko Trkanjec | EURACTIV.hr)

Serbian defence minister in uniform banned from Montenegro. Montenegro authorities have stopped Serbian Defence Minister Aleksandar Vulin and his military entourage at the border as they were trying to enter the country wearing Serbian military uniforms.  (Željko Trkanjec | EURACTIV.hr)

Different views on ‘mini Schengen’. The prime ministers of Kosovo and Albania had strikingly different views on the Western Balkans “Mini-Schengen” initiative at a news conference in Tirana. EURACTIV Croatia’s Željko Trkanjec has more.

No US investments The United States has decided to cancel all major investment projects in Kosovo until the government of Kosovo decides to cancel the tax on Serbian goods, RTK television reported. Referring to its sources, RTK reported that US Presidential Special Envoy for Dialogue, Richard Grenell, in communication with Kosovo Prime Minister Albin Kurti and Parliament Speaker Vjosa Osmani, made it clear that the US is ready to invest millions in Kosovo territory if Pristina abolishes imposed taxes on Belgrade. “However, the US will cancel all these projects until the government cuts taxes and abandons plans to establish reciprocity,” an unnamed source told RTK. (Željko Trkanjec | EURACTIV.hr)