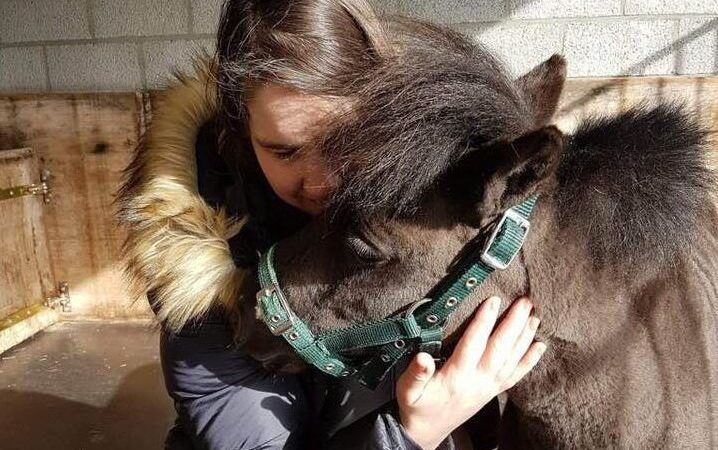 MEPs and parliamentarians were treated to an unusual sight yesterday morning, when a miniature horse was seen trotting the hallways of the European Parliament in Brussels.

The diminutive equine’s name is Dinky, a guide horse who assists Bruges-resident Monique Van den Abbeel. Monique has been blind since she was 11 and was in the Parliament to help raise awareness about the visually-impaired.

Dinky is the first animal to be officially let into the Parliament, according to Dutch lawmaker Jan Huitema, who was one of the first in line to snag a photo opportunity with the tiny horse.

Monique and Dinky’s tour of the institution was made possible by Belgian MEP Hilde Vautmans, from the liberal ALDE group, who wanted to use the pair to draw attention to the issue of assistance animals.

“Monique and Dinky show that from now on we should not only think of assistance dogs but assistance animals,” Vautmans said, adding that she has taken the initiative of drawing up an action plan.

“We need to change the current legislation: recognition of other assistance animals in addition to dogs and access to public areas,” she added.

Rules across Europe are not particularly clear on the issue at the moment. For example, in the United Kingdom, the relevant law specifically mentions “dogs”.

Dinky could be the first of many small horses on our streets if the right legal framework is put in place. In February, the UK’s first guide horse, Digby, was trained to assist BBC journalist Mohammed Salim Patel, who is afraid of dogs.

In addition to helping people with phobias or fears of dogs, horses also have other advantages: they can help people who are allergic to canines and live longer than dogs, meaning owners can form stronger bonds with their companions.

However, they do have their shortcomings compared to dogs, as they are more easily spooked by traffic, are harder to toilet train and are larger, so room for manoeuvre in smaller spaces like shops can be problematic.

But Dinky took everything in his tiny stride and negotiated the Parliament “all without blinking”, Vautmans said. “We took the elevators, stairs, went through security and entered the plenary meeting.”

The European Accessibility Act has the potential to create new opportunities for European business but should avoid creating “barriers” to innovation, according to Helga Stevens.