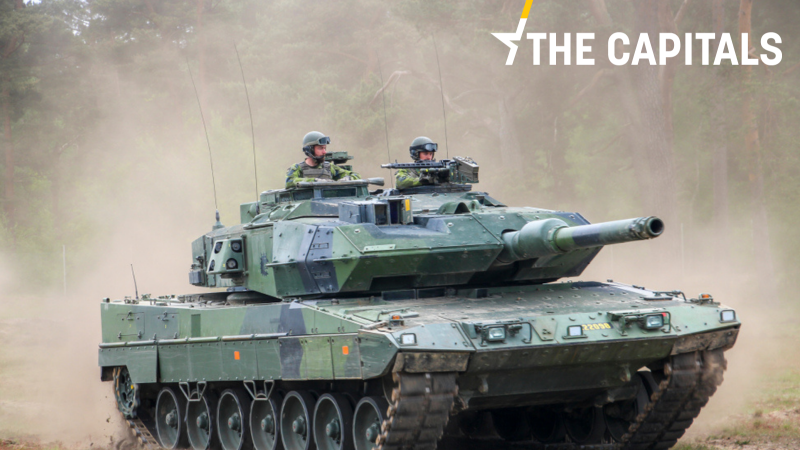 The armament that is set to take place in the coming five years has not been of such magnitude since the Second World War. [Shutterstock/ Ivar Skoglund]

Before you start reading today’s edition of the Capitals, feel free to have a look at the article “Fifteen EU countries raise alarm on Europe’s ‘anti-5G movement’“, by Samuel Stolton.

Surge in military spending. Sweden will increase its military budget by up to 40% by 2025 if the bill proposed by the minority government of Social Democrats and the Greens is adopted. Given that it is backed by the Centre Party and the Liberals in opposition, parliament will most likely vote in its favour. Read more.

MEP Sean Kelly runs for EU Parliament presidency. MEP Sean Kelly has sent a letter to the EPP Group Presidency and all heads of national delegations asking for their support to replace MEP Mairead McGuinness, who has been appointed to serve as European Commissioner for Financial Stability, Financial Services and the Capital Markets Union. Read more.

Continued concern over growing coronavirus numbers. Germany reached a new high for single-day coronavirus case numbers on Friday (16 October) with more than 8,000. Across the country, politicians are considering new measures to combat the exponential spread of the virus and encouraging people to stay home as much as possible. Read more.

National tribute. Major demonstrations were held throughout France on Sunday to pay tribute to Samuel Paty, a teacher who was assassinated on Friday after showing his students caricatures of the prophet Mohammed, an incident which President Emmanuel Macron described as an “Islamist terrorist attack”. A national tribute to honour Paty will be held on Wednesday (21 October), the Elysée has announced. Read more.

Belgium goes into partial lockdown. Belgium is set to tighten its COVID-19 measures with new rules coming into effect on Monday, after the country recorded rising coronavirus infections and hospital admissions. At the same time, Belgium’s Health Minister warned of an impending ‘tsunami’ in Brussels and Wallonia. Read more on the measures here.

New COVID-19 measures to be discussed on Monday. New nation-wide measures will be discussed on Monday (19 October) between Austria’s government and the heads of Austrian states, Chancellor Sebastian Kurz (ÖVP) and Health Minister Rudolf Anschober (Greens) announced on Friday. Kurz also warned of the rising number of daily coronavirus cases and urged Austrians to be more cautious in a Facebook video message addressed to the nation. (Philipp Grüll | EURACTIV.de)

Coveney points the finger at UK. Irish Foreign Minister Simon Coveney has said the UK is to blame for the recent breakdown in trade negotiations with the EU, following UK Prime Minister Boris Johnson’s claim that talks were effectively at a deadlock. Read more.

Milan in ‘critical situation’ as COVID-19 infections continue to rise. As COVID-19 infections in Italy continued to rise over the weekend as the country recorded more than 20,000 cases and 116 related deaths over the last two days, the situation is now critical in Lombardy, especially in Milan and its metropolitan area. Meanwhile, regional administrations asked the government to not further penalise local activities and to avoid introducing earlier closing hours, or do so only in areas with higher coronavirus infection rates. Read more.

New restrictions limiting the occupation in hotels and cultural and religious events to 50% in the city of Salamanca and in the Basque Country, among other regions, are not having any positive effect to curb the current contagion trend and are not reducing the newest outbreaks, Spanish health authorities have reported. Read more.

Juncker backs sanctions against Turkey. Former EU commission chief Jean-Claude Juncker said in an interview with Ta Nea that he has never been in favour of sanctions as a way to solve a political problem. “But if Turkey and Erdogan do not change their behaviour, then we should impose sanctions,” he said.

Greece had also pushed for an EU arms embargo against Turkey, which was blocked by other EU partners. Read more.

Meanwhile, Poland reported its highest daily total of 9,622 new coronavirus infections on Saturday morning. Since Saturday, the number of confirmed coronavirus cases in Poland has increased by 8,536 new infections and reached 175,766, while 49 people died during the same period, bringing the total death toll to 3,573, the health ministry said on Sunday morning. Read more.

In other news, the Hungarian government openly endorsed US President Donald Trump for the upcoming US presidential elections. However, Foreign Minister Péter Szijjártó wrote on his Facebook page that Joe Biden should address corruption allegations in connection with Ukraine before resuming dealings with Hungary.  (Željko Trkanjec | EURACTIV.hr)

Slovak government approves plan to test entire population. Slovakia is ready to introduce mass-scale testing using the antigen test across the country as the number of new daily COVID-19 cases continues to increase, the government has confirmed. Read more.

Bucharest, under more severe restrictions. Mask wearing will now be compulsory in all outdoor spaces in Bucharest, as the incidence rate surpassed the limit of three cases per 1,000 people in the past 14 days, which, according to the rules, means that more severe restrictions are to apply in the respective region. Meanwhile, school courses will only be held online as of Tuesday (20 October), while cinemas, theatres, and the indoor areas of restaurants and cafes will close, Prime Minister Ludovic Orban has confirmed. (Bogdan Neagu | EURACTIV.ro)

Common history still an issue. The meeting of the Bulgaria-North Macedonia working group of scientists, tasked with sorting out the “common history”, was reportedly a failure. The format was decided under a 2017 treaty between Sofia and Skopje, aimed at solving outstanding problems and allowing the former Yugoslav republic to move toward EU membership. Read more.

Funding priorities in Brussels by end of June. Croatia will send by the end of June its list of priority areas for funding from the 2021-2027 budget to Brussels, Regional Development Minister Natasa Tramišak told Hina, the national agency. Read more.

New Serbian government announced on 20 October. A session of the ruling Serbian Progressive Party presidency which, according to earlier announcements, should result in the names of Serbia’s new ministers, is slated for Tuesday (20 October) in Belgrade. Read more.

Is Joe Biden’s message authentic? “What Joe Biden Will Do: Reverse the Trump Administration’s imbalanced approach toward Kosovo and Serbia, restoring fairness and equity in the relationships and working toward greater cooperation.” Read more.

Biden’s message for Albania? Strengthening US-Albania relations by growing a defence relationship to ensure Albania remains a strong NATO ally, expanding economic and trade relations between the two countries, and having honest conversations for greater accountability when one or the other falls short of democratic ideals.  Read more.