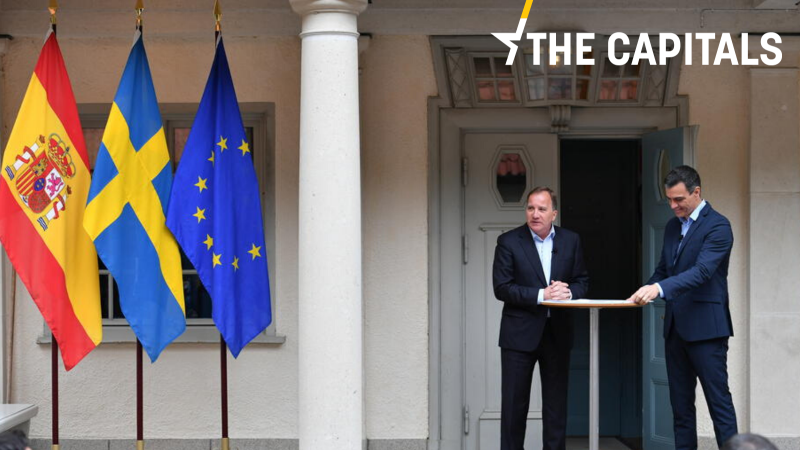 Before you start reading today’s edition of the Capitals, feel free to have a look at the article MEPs raise the pressure on EU recovery green spending rules by Frederic Simon.

Swedish veto on MFF and EU Recovery Fund still possible. Swedish Prime Minister Stefan Löfven said on Wednesday (15 July) he hopes for a quick resolution of the disagreements over the EU’s Recovery Fund and next seven year budget. However, he did not exclude a Swedish veto. Read more details here.

No more gender-parity on Thuringia’s party lists. A court in the Eastern state of Thuringia has stated that the rule to alternate between male and female candidates on party lists violates the constitution, following a suit brought by the far-right AfD party. The court’s president argued that freedom of choice requires that elections are not carried out by coercion and pressure from the state. EURACTIV Germany’s Sarah Lawton reports from Berlin.

Yet another COVID-19 cluster in a slaughterhouse. In the region of Lower Austria, a cluster of coronavirus infections has been identified in a meat-processing facility. Among the employees, 29 tested positive, with 40 tests still pending. It is the fourth COVID-19 cluster in an Austrian slaughterhouse in recent weeks and opposition parties are criticising the facility’s working conditions. (Philipp Grüll | EURACTIV.de)

Belgium ‘ready’ to take stricter measures. Belgium postponed a further easing of rules on social gatherings on Wednesday (15 July) after an uptick in the number of COVID-19 infections, while Prime Minister Sophie Wilmes said after a meeting of the country’s National Security Council that she could not rule out the reintroduction of lockdowns in areas worst affected.

According to health experts, the reproduction rate (R number) of COVID-19 infections had risen above 1 once more, indicating that the virus was again spreading exponentially in the country. “This means that the epidemic is getting worse, gaining strength, even if it is still limited right now,” she told reporters. “But it is not good and we are monitoring the situation very closely.”

COVID-19 restrictions may be reinforced on Sunday. After reaching 5,000 COVID-19 cases and being labelled “orange” by both Belgium and Germany, Luxembourg’s Prime Minister Xavier Bettel expressed his worries that the Grand-Duchy may be facing a second wave.

“We don’t know if it’s a wavelet or a real second wave. The wave does not become clear until it begins to break”, Health Minister Paulette Lenert has said. On Thursday (16 July), the parliament will vote on a new COVID-19 law. “If amendments are needed, we will make them,” Bettel said.

Johnson loses intelligence committee. Boris Johnson’s government suffered an embarrassing defeat on Wednesday (15 July) when his Conservative party’s nominee Chris Grayling lost to fellow Tory lawmaker Julian Lewis in the race to become chair of the Intelligence and Security Committee. Lewis was promptly kicked out of the Conservative parliamentary party and accused of conspiring with the opposition Labour party.

The committee overseas the UK’s spy and intelligence agencies and it is thought that Lewis is likely to put pressure on Johnson to finally publish a delayed report on Russian interference in UK politics. (Benjamin Fox,  EURACTIV.com)

Conte wants EU Recovery Fund to be adopted without being watered down in July. Italian Prime Minister Giuseppe Conte presented his positions on the EU Recovery Fund to the Chamber of Deputies on Wednesday (15 July), stating in a resolution that the Next Generation EU funds should be available before the end of this year. The motion won a majority and was subsequently approved. EURACTIV Italy’s Alessandro Follis looks into the details.

EU Commissioner Breton wants to define “future of tourism“. It is time to “define the future of tourism”, the EU’s Internal Market Commissioner, Thierry Breton, told a conference on ‘Tourism in times of COVID-19’ organised jointly by Portuguese news agency Lusa and Spanish news agency EFE on Wednesday. The Hotel Association of Portugal called for coordination of health guidelines at EU level. (Maria João Pereira, Lusa.pt)

In other news, Banco Espírito Santo (BES)’s former CEO, Ricardo Salgado, has been charged with 65 counts, including criminal association, bribery, embezzlement, money laundering and tax fraud. This marks the end of the six-year-long BES/GES investigation, under which 18 individuals and seven companies have so far been charged. Lusa.pt’s Cristina Cardoso takes a closer look.

“LGBT-free zones” under criticism. Polish courts have annulled two of the “LGBT-free zones” that have been declared by many local authorities around Poland. Judges found that they violate the constitution, which bans discrimination and requires equal treatment. The office of Poland’s commissioner for human rights, Adam Bodnar, which filed the complaints, hailed the rulings as unprecedented.

At the same time, the Dutch town of Nieuwegein announced it is ending the city partnership with its Polish twin town Puławy due to the partner’s “LGBT free zone.” The entry on the official website of Nieuwegein provided a photo of the town sign where the name of Puławy was being covered with a rainbow flag. The two had been twin cities for 21 years. (Alexandra Brzozowski, EURACTIV.com)

Agrofert’s trust fund statutes published. Media server iRozhlas.cz published trust funds statutes of agrochemical company Agrofert Holding, which was formerly owned by current Czech Prime Minister Andrej Babiš and is now managed by trust funds. According to the documents, Babiš is the only beneficiary of Agrofert Holding, meaning that once he quits politics, the company’s ownership would return to him immediately.

These documents were already reviewed by auditors of the European Commission and the Czech Republic’s general prosecutor, iRozhlas.cz noted. (Aneta Zachová | EURACTIV.cz)

Abortion high on the agenda again. Eighteen MPs from the governing parties (mostly OĽaNO) have voted in favour of two draft laws tabled by opposition neo-fascist party ĽSNS substantially restricting access to abortion, although their vote goes against the coalition agreement. The parliament, however, rejected the two draft laws.

However, a draft law tabled by conservative MPs that also amends abortion conditions comfortably passed its first reading in parliament earlier this week. Among other things, the amendments prolong the “cooling off” period before an abortion can be performed to 96 hours.(Zuzana Gabrižová | EURACTIV.sk)

PM defends Von der Leyen’s campaign participation. Asked about criticism from Brussels about European Commission President Ursula von der Leyen’s participation in the election campaign of the ruling party HDZ, Prime Minister Andrej Plenković said she did not arrive at the helm of the Commission out of a vacuum, but was supported by a political group. EURACTIV Croatia’s Karla Juničić has more.

Six bids for corona-tracing app. Six bidders have applied for a government tender to develop a mobile app for tracing contacts with COVID-19 infected people. Two have already been eliminated for exceeding the bid price while an expert group will review the remaining four bids and choose the winner, who should sign the contract “in the next few days”, the official STA news agency reported. The developer will be required to create both an iOS and Android app.

This comes on the seventh day of mass civil anti-corruption protests against the rule of Borissov and Chief Prosecutor Ivan Geshev. The prime minister announced that the European Council summit over the weekend would decide whether he would resign. Read more on the issue here. (Krassen Nikolov | EURACTIV.bg)

Vučić to discuss missing persons, economic cooperation in Brussels. Serbian President Aleksandar Vučić said on Wednesday (15 July) that the issue of missing and displaced persons and economic ties would be discussed during EU-mediated talks with Kosovo’s delegation in Brussels on Thursday.

“We are prepared for the talks, and as I can see from media reports in Pristina, they are getting ready as well. We are trying to do what we can do, and we’ll fight, that’s all I can say. Our goal is to fight for the interests of Serbia and the Serbian people,” Vučić told reporters. (EURACTIV.rs  betabriefing.com)

>> Read also: Serbia and Kosovo to resume rocky road towards an accord