Tajani will need to explain his Mussolini statements 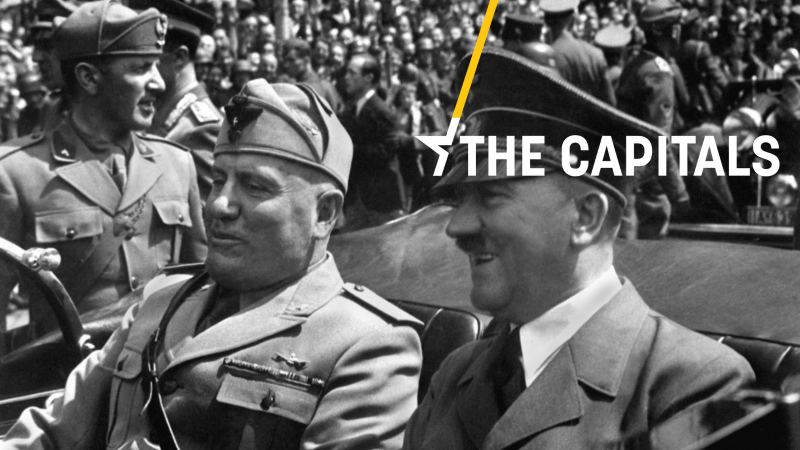 “Mussolini? Until he declared war on the whole world by following Hitler, until he became a promoter of the racial laws, apart from the dramatic story of Matteotti, he did positive things to build infrastructures in our country. From a point of view of concrete facts realised, it cannot be said that he has accomplished nothing,” Tajani said on Radio 24.

He continued: “I am not a fascist, I have never been a fascist and I do not share his political thinking. But if you have to be honest, Mussolini has built roads, bridges, buildings, sports facilities, has reclaimed many parts of our Italy, the institute for industrial reconstruction. When one gives a historical judgment it must be objective, then I do not share the racial laws that are crazy, the declaration of war was suicide”.

And more: “Certainly yes, certainly [Mussolini] was not a champion of democracy. Some things have been done, one must always tell the truth. One must not be biased in the judgment. Overall I do not consider positive the his government action, but some things have been done. The wrong things are very serious, Matteotti, racial laws, war. They are all unacceptable things.”

“Two hours after praising Mussolini, Tajani meets Salvini and Meloni, the extreme right Italians – Bullmann added – “Is this the future profile of the EPP after Orban?”.

Tajani tweeted his repy:  “Shame on those who manipulate what I’ve allegedly said on fascism. I’ve always been a convinced anti-fascist, I will not allow anyone to suggest otherwise. The fascist dictatorship, racial laws and deaths it caused are the darkest page in Italian and European history.”

This is not the first time that Tajani is accused of World War II revisionism.

Italy is already shifting towards Chinese bloc day by day: The memorandum of understanding between the Chinese and Italian governments, revealed last week by EURACTIV.com, continues to heat up the political debate in Italy.

China’s plan to make Italy its gateway to Europe has already raised eyebrows in Washington, although the memorandum is expected to be signed during Chinese President Xi’s first visit in the country on 22 and 23 March.

Contacted by EURACTIV, Italian senator Lucio Malan, of centre-right Forza Italia (EPP), said Rome was already taking a number of concrete actions in a very precise political direction. He cited the recent trip by Luigi Di Maio to China but also the veto at the EU Council level over the recognition of Juan Guaidò as president of Venezuela.

The vice-president of the parliamentary committee for intelligence and security Adolfo Urso (affiliated to right-wing Fratelli d’Italia (ECR)) told EURACTIV that Italy’s foreign policy had already changed and there have already been several signals in this direction.

“The fact is that the government did not say this to the country, or to the parliament, which has not yet expressed itself on it,” Urso, added.

According to the lawmaker, the greatest risks for the country from enhanced cooperation with China are already highlighted in the yearly national security report: cyber threats and possible “colonisation” through penetration of the knowledge and industrial sectors.

Humanitarian visa scandal: A Belgian government inquiry has uncovered the existence of collective procedures for the issuance of humanitarian visas to Syrian Christians from the former secretary of state, Theo Francken (N-VA), who responded to at least thirteen intermediaries, unknown to the authorities.

Belgian MPs, except Flemish nationalist N-VA, unanimously condemned the “Francken system”, which they say allowed the opening of an opaque migration channel. Bypassing the administration, these procedures were established without performing the normal identity checks, the report stated.

In total, the procedure involved 1,502 people; 1,150 were granted asylum or are on track to obtain it. Meanwhile, 121 people got a visa but never asked for asylum and the government does not know their whereabouts.

Unattractive EU capital? Around 275 UK-based banking and financial businesses have said they would shift all or some of their operations to mainland Europe to prepare for Brexit, according to a new report. But while Dublin is by far the biggest winner with 100 relocations, well ahead of Luxembourg (60), Paris (41), Frankfurt (40) and Amsterdam (32), Brussels was left out in the cold and managed to attract only nine. (Alexandra Brzozowski, EURACTIV.com)

No deal – No way: British MPs voted to reject leaving the EU without a deal, by a small majority. But the decision is not legally binding and the default position, should no agreement be reached, is still to leave on 29 March without a deal.

MPs are now set to vote on the possibility of a Brexit delay on Thursday. (Samuel Stolton, EURACTIV.com)

Greens call for €110 billion Eurozone budget: In a document seen by EURACTIV’s media partner Tagesspiegel, due to be debated in the Bundestag today, the Greens call for a mid-term budget target of at least 1% of Europe’s GDP. This would mean €150 billion per year.

But the Greens made it clear that they only want to use the eurozone for the calculation, not Europe’s GDP, meaning the eurozone budget would be €110 billion. What the common GDP refers to is not clear in the document, the paper adds. (EURACTIV.de)

Whistleblower law in France: Following an EU-wide agreement, France has changed its mind and announced its support for the EU whistle-blower directive. But France will have to first change its own law, the so-called Sapin II. The EU directive allows whistle-blowers to choose whatever channel they want to spread the news, while the French law is much stricter.

From military to peacekeeping: The Polish government announced that it would deploy 170 soldiers to Lebanon within the framework of the UNIFIL peacekeeping mission. The previous government preferred to focus on military presence in Iraq and Afghanistan.

More harm than good: According to the Polish Economic Institute, an organisation affiliated with the PM’s office, a hard Brexit would cost Poland 46,500 jobs related to UK exports or 0.3% of the entire workforce. The most vulnerable sectors include agriculture and food processing, where more than 10,000 people risk losing their jobs. (EURACTIV.pl)

Officially a leftist Progressive Alliance: Alexis Tsipras’ ruling party SYRIZA (European Left) will participate in the EU elections under the name “SYRIZA-Progressive Alliance” in an attempt to broaden its audience to central left voters by including candidates that are not members of the party.

Tourism on the up: Greece’s tourism and travel sector grew by 6.9% last year, accounting for 20% of GDP and 20% of jobs, according to a survey conducted by the World Travel and Tourism Council (WTTC).

Greece against suspending Turkey’s accession talks: Greece’s main parties in the EU Parliament voted against a resolution to freeze Turkey’s EU accession talks. However, the news did not make headlines in the mainstream media. (Theodore Karaoulanis, EURACTIV.gr)

Slovakia will keep subsidising e-mobility: The government has approved a long-awaited action plan for electromobility. “Slovakia is an automobile superpower. Electromobility is a trend in the transport sector and if we want to remain the leader, we must get behind this,” Economy Minister Peter Žiga said.

The plan foresees €5 million in subsidies for the purchase of new electric vehicles, €1 million for local authorities to build the necessary infrastructure and €30,000 for an information campaign. (Pavol Szalai, EURACTIV.sk)

Babiš backs a second Brexit referendum: According to Czech PM Andrej Babiš, there should be a second Brexit referendum. This is what he suggested to his British counterpart Theresa May in a recent phone call. “I told her that the best option would be if the UK stayed in the EU. This is why I am convinced it is worth calling for a second referendum,” Babiš tweeted. But he also admitted that she refused to take his advice.

Czech digital tax: EU finance ministers did not agree on the digital tax for online companies. That’s why the Czech Republic wants to have its own legislation. “I started to work on the so-called digital tax at the national level,” Finance Minister Alena Schillerová said. EURACTIV.cz’s media partner Aktuálně.cz also quoted her as saying that a worldwide tax would be the best option. (Aneta Zachová, EURACTIV.cz)

Parliament rejects budget reexamination: The Romanian parliament rejected the request of President Klaus Iohannis to review the state budget. As a result, the budget is sent back to the president, who is forced to sign it into law.

Russia to take advantage of corruption: If Romania fails to properly tackle corruption, it will grant other actors who wish harm the country, such as Russia, the opportunity to profit and sow division in Romanian society, US ambassador to Bucharest Hans Klemm said in an interview with Radio Free Europe. The ambassador also spoke about the Russia-sponsored cyber attacks against NATO allies and expressed his support for Laura Codruta Kövesi’s candidacy for the position of chief European prosecutor. (EURACTIV.ro)

Brexit extension: Croatia is open to the idea of extending the deadline for Brexit, Croatian Prime Minister Andrej Plenković has said. He sees two scenarios: a shorter deadline which would give a final chance for an orderly Brexit by 1 July at the latest; or a longer deadline, which would raise a number of issues such as the EU elections. Plenković would prefer a shorter deadline.

HDZ BiH refused to condemn Serbian chauvinists: At a session of the House of Peoples of the Parliamentary Assembly of BiH, the leading Croatian party (HDZ BiH) voted against including the condemnation of a gathering of Serbian chauvinists and racists (Chetnik movement) on the agenda. All representatives of Serbian parties also voted against it. (Željko Trkanjec, EURACTIV.hr)

Spain insists on Kosovo non-recognition: Spanish Minister of Foreign Affairs Josep Borrell has said Madrid has not changed its position on Kosovo. He added that a solution to the problem could be found only through dialogue. Spain is one of five EU members that have not recognised Kosovo’s independence.

Catalan president Quim Torra refused to withdraw from official buildings the yellow ribbons and estelades flags, both symbols of the pro-independence movement. The separatist leader disobeyed the 48-hour deadline issued by the Central Electoral Board to comply with the order, requested by Ciudadanos, the largest opposition party in Catalonia.

Torra accused the electoral authority of partiality and said he was defending “the freedom of expression of civil servants” to display those symbols.

Spain will hold snap elections on 28 April, and Catalonia will be the key issue during the campaign. The country will also hold local, regional and European elections on 26 May (Jorge Valero, EURACTIV.com).