TEE, powered by the European Parliament – War is on between pro-Europeans, anti-migrations 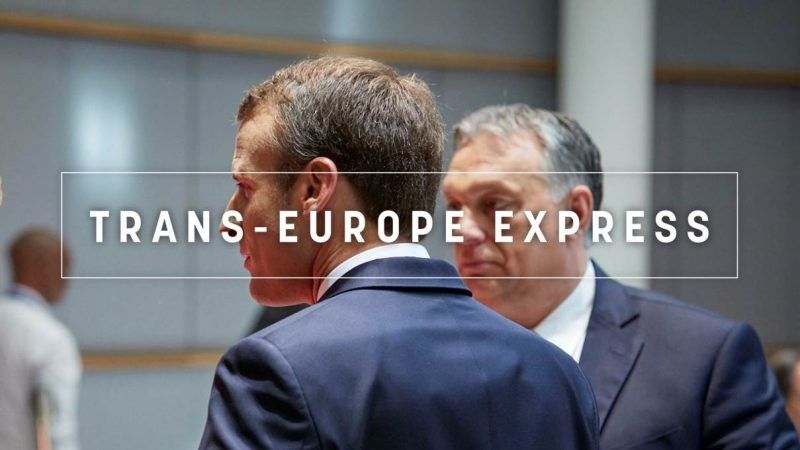 “Where is the French right going?” LR deputy Maël de Calan asks in the book “The populist temptation”, released on 30 August. Inside French right-wing party Les Republicains, the stance of its leader raises questions and doubts.

The speech Laurent Wauquiez gave at the end of August “could very well have been delivered by Marine Le Pen or Nicolas Dupont-Aignan”, an activist said.

This is a direct effect of Emmanuel Macron’s election victory.  As the centre of the political spectrum is reviving, traditional parties are radicalising their positions to stand out.

Denouncing a “small elite confided in its certainties,” Wauquiez underlined that the French refuse to “become foreigners in their own country,” suggesting that waves of migrants were threatening France. In fact, 8,000 asylum applications were lodged in the first half of 2018. Or 1 request for 8,750 inhabitants.

On the left wing, the Socialist Party wants to be moderate. But while trying to keep a distance from both Macron and Mélenchon, the party that had brought François Hollande to power has become inaudible.

Socalists can’t even find a candidate to lead the European election campaign. Despite candidacies from Pierre Moscovici or Julien Dray, the party’s first secretary, Olivier Faure, proposed to the Belgian Paul Magnette to lead the battle. He was rebuffed.

Former Prime Minister Manuel Valls, for his part, has preferred to leave the mess. He is said to be preparing his candidacy to become Barcelona’s mayor.

The Socialist party gathers only about 6% support in the French electorate, according to the latest polls, and 3% for Benoit Hamon. At the same time, radical leftist Jean-Luc Mélenchon is climbing in the polls with 14% of voters intention, just behind the Republicans (15%) and the National Gathering, ex-FN (17%).

“We want to make the European elections look like an anti-Macron referendum,” Melenchon has stated.

The case of the Socialist delegation to the European Parliament illustrates how the Macron effect has made the left implode. Emmanuel Maurel should soon join Mélenchon, Edouard Martin has decided to throw in the towel, while Isabelle Thomas and Guillaume Balas have joined Benoit Hamon in his Generations movement.

The phenomenon of strengthening extremes is also at work at the European level.

The war is declared between pro-populists and pro-Europeans. Italian Lega leader Matteo Salvini and Hungarian Prime Minister Viktor Orban said Macron was their number one enemy.

“If Salvini and Orban see me as their political opponent, they are right,” retorted Macron. For the French centrist, all populists are anti-Europeans. “Populism can come from traditional parties. Brexit came from moderate traditional parties,” the European Affairs Minister Nathalie Loiseau said in a speech for Sciences Po students this week.

Coming from the rather radical Bavarian right, the CSU, the leader of the EPP group has turned a blind eye to his Hungarian member, Fidesz. He also declared in 2016 that “migrants who do not respect our culture have to leave Europe”, and tweeted a picture of Jesus Christ in a church with the sentence “If we want to defend our way of life, we must know what determines us”.

Those radical statements feed an implosion risk for the EPP, just as the LR  has been split up in France around the cleavage between pro-Europeans and anti-immigrants.

In the next European Parliament, this cleavage should make it possible to build coalitions of pro Europeans (including a few leftists, greens, right, and centre) against all the others.

When Christophe Castaner, En Marche general secretary, met ALDE leader Guy Verhofstadt in Brussels this week, they agreed on sharing a common ambition: “the alliance of progressive European forces to block the conservatives and nationalists.”

But Castaner does not endorse the Spitzenkandidaten process and considers it “anti-democratic”. In fact, as things stand today, it’s Merkel who elects the Commission’s president by choosing EPP’s head for the European election.

France, whose president has yet to build a strong standing in the European Parliament, would prefer to see the EU top jobs game stay open. That is also why Margrethe Vestager is seen as a more diplomatic option to lead the centre’s campaign than Verhofstadt.

It’s time to check how far we’ve come and how far we’ve yet to go.  Follow the State Of the Union debate where the members of the European Parliament examine the European Commission’s achievements and debate its objectives. It’s one of the ways in which the Parliament holds the executive power to democratic account. This year it will be held on Wednesday, September 12 at 09:00 CET. Click here to watch it live! #thistimeimvoting #EUelections2019

Hitting hard. Paris does not want to finance a populist Europe, the country’s foreign minister Jean-Yves Le Drian has indicated, just as the fight over the EU’s new long-term budget begins in earnest.

Mailbox blues. France has passed a new legislation that prohibits the use of mobile phones in the classroom, in a move by the government aimed at combatting distraction and cases of online bullying.

High tension. The fight against corruption is one of the key campaign issues for the Latvian October parliamentary elections. However, the strange cabals, which are likely driven by Russia, tend to tarnish the entire political class.

Via Carpathia. Poland for long has been looking for opportunities to boost regional cooperation with its neighbours. With plans for the so-called Carpathian Strategy having gained support, this could soon become reality.

Recycling leaders. Almost 75% of Czechs correctly classify almost half of used batteries and lead the prime among the European member states.

Land swap proposal. After Serbia and Kosovo have floated the idea of a territory exchange to settle their disputes, there are fears that it might create further instability in the Balkans.

Cry for help. Cyprus appealed to the EU to send the country more help with illegal migrants, warning it would be unable to cope if the influx of arrivals continues to its shores.

One response to “TEE, powered by the European Parliament – War is on between pro-Europeans, anti-migrations”