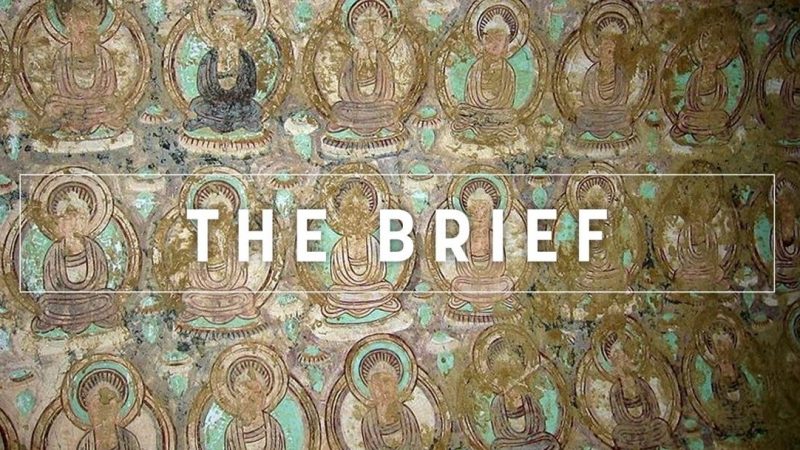 Buddha’s eyes have been gouged from his face and his skin has been scratched out in a mad and impassioned frenzy. These are the murals at the Bezeklik caves, near the ancient ruins of Gaochang in the Mutou Valley, China.

They were most probably defaced by a local Muslim population, following the gradual Islamisation of the area after the Chagatai ruler Khizr Khwaja’s holy war in the 1390s.

Today, Uighurs are a majority Muslim population but their 10-million strong community in Xinjiang has faced a backlash under China’s Communist-led government.

The city of Hotan in Xinjiang hosts a gargantuan building, walled by a barbed fence and known as one of China’s “concentrated transformation-through-education centres.”

Mass detention of the Muslim Uighur community is an issue for which Western states have repeatedly criticised China. During a UN Human Rights Council in November, Bejing was urged to “abolish all forms of arbitrary detention.”

Allegations abound as to the nature of ‘education’ that takes place inside these imposing buildings. As many as one million Uighurs are understood to have been detained across the country, reportedly subjected to psychological indoctrination programmes and forced studying of Communist propaganda.

One former detainee, Kayrat Samarkand, told the Washington Post that different forms of torture were administered regularly for any failure to comply with the rules.

“Those who disobeyed the rules, refused to be on duty, engaged in fights or were late for studies were placed in handcuffs and ankle cuffs for up to 12 hours,” he said.

The region is of strategic importance to China’s ambitious ‘Belt and Road Initiative,’ which involves investments and infrastructure spanning more than 80 countries in Europe, Asia and Africa.

Sitting alongside the ancient Silk Road, Xinjiang is the Belt and Road’s logistics and transport hub.

The European Commission has done its best to allay concerns about the Belt and Road plans, stating that any cooperation in this project should adhere to “market rules, EU and international requirements and standards.”

However, the treatment of the Uighur in Xinjiang should serve as a reminder that, beyond economic and political concerns, there are fundamental human rights violations ensnared in the Belt and Road initiative.

Last year, a dozen representatives from France, Britain, Germany and the EU’s envoy in Beijing demanded a meeting with Xinjiang’s top official, Communist Party chief Chen Quanguo, to discuss the treatment of the Uighurs. Beijing eventually conceded and invited them to visit the site in Xinjiang earlier this year.

On Tuesday next week, Brussels plays host to an EU-China Summit. Needless to say, the Uighur crisis is not on the agenda.

However, a senior EU source revealed today that this is an issue European Council President Donald Tusk may take up bilaterally with the Premier of the State Council of China, Li Keqiang.

There will “not be an easy dialogue” on this issue, the EU source said.

But it’s precisely issues like this that the EU should take with sincerity. Should wider ethical principles be compromised in the pursuit of economic benefits, it is not only the Uighur community who would lose out, but also the standing of the EU on the world stage.

UK’s PM Theresa May has asked the EU to delay the Brexit date further to 30 June, admitting that the UK will have to hold European elections and is ready to do so.

Medicine supplies and food safety standards are both vital and the EU cannot prioritise one over the other in the event of a no-deal Brexit.

LEAK: Brussels is ready to refuse to sign a joint statement with China at a bilateral summit next week, as Europeans request stronger commitment from Beijing on the economy, trade and human rights.

Ahead of the Eastern Partnership’s 10th anniversary, EU foreign ministers are set to review the progress of the bloc’s framework with the six countries, with the situation in Ukraine being the elephant in the room.

Serbia in the EU by 2025 – mission (im)possible? Civil society representatives have warned that neither Belgrade nor Brussels were trying very hard.

A German court stripped anti-globalisation association ATTAC of its charity status last January. Environmental groups now fear they could be next because they are politically active.

Libyan strongman Khalifa Haftar ordered his troops to “advance” on Tripoli, seat of the internationally-recognised unity government, as world powers warned of consequences for military action.

The outgoing European Commission has done a lot of work when it comes to the circular economy but attention is now turning to the future and how to make sure recycling efforts really take off.

Finland has hit out at European Commission plans to develop cooperative intelligent transport systems (C-ITS), saying the measures are “not technically neutral”.

Our new edition of Tweets of the Week features pies that are sacrificed on Brexit’s altar, MEPs turning nasty in the row over Gibraltar and NATO at 70 doesn’t falter.

EU foreign ministers meet in Luxembourg on Monday to discuss Eastern Partnership, Venezuela and the peace process in Afghanistan. Plus another Brexit EU summit on 10 April.