The Brief – Against all odds 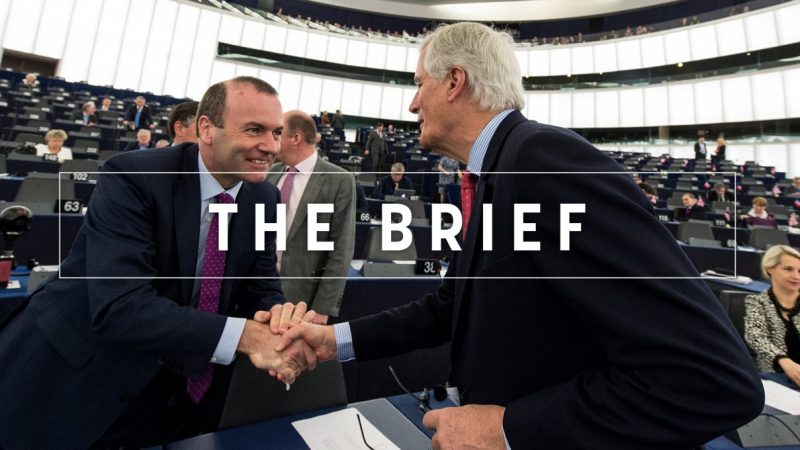 If the race for the EU’s top job this summer really comes down to a choice between Manfred Weber and Michel Barnier, the outcome might still surprise us.

The last session of the current European Parliament was a strange affair. As the Brussels bubble slowly unwinds, most Commissioners, MEPs and their entourage think about where they will be after the summer.

No wonder that a rather thoughtful Jean-Claude Juncker, the outgoing Commission boss, wistfully reminded us that his time in office will unfortunately end with an inglorious Brexit Halloween night.

But while most EU lawmakers used the last debates to raise their profile before the May vote, two of the most watched men in the hemicycle kept silent.

Weber, who according to data published by Ladbrokes, has the best odds to land the Commission top job, might have been contemplating his recently slightly derailed election campaign.

After the dubious suspension of Hungary’s ruling Fidesz party form the EPP over a rule of law row, one cannot but notice that Weber now bases his campaign around ‘safe topics’.

Several EU officials, diplomats and lawmakers have expressed doubts about his adequacy, as he has never held high executive office.

Barnier’s CV reads like a perfect application for the top job. His experience ranges from serving as European Commissioner and French foreign minister to organising the 1992 Winter Olympics in Albertville.

National and party leaders recognise him as one of their own and someone they can work with. EU leaders have lavished their Brexit negotiator with praise for his handling of the Brexit talks and his hand has been strengthened as a result.

“It is my duty to remain committed with all my energy and determination,” Barnier said in a November letter to EPP president Joseph Daul, justifying his refusal to run and leaving no doubt that he is 100% focused on his Brexit task.

Nothing, it seems, would run more contrary to his values than to publicly stab the party’s top candidate Weber in the back. Yet, if the Spitzenkandidat system fails, he will be the logical choice.

Which is probably why Barnier has emerged as the dark horse among Europe’s political pundits. The Frenchman is tied for second and third place in the betting alongside, Frans Timmermans (S&D) and Margrethe Vestager (ALDE).

Barnier, the silent and effective Eurocrat, who can bring cohesion to the EU27, seems to be the better choice for Europe. But would he also be the desired choice in the eyes of veteran Brussels decision-makers?

Rumours in the Brussels corridors suggest that in a face-off between Barnier and Weber, the odds might just turn in favour of the weaker.

Because the stronger candidate might pose a threat to those who count on having a weak Commission president, someone who would leave them space to manoeuvre in the shadows. With Barnier in charge, a Martin Selmayr, for example, would hardly be able to wield such influence.

The devastation of Paris’s Notre Dame cathedral is a blow to all Europe and all Europe will contribute to its rebuilding, world leaders and EU lawmakers declared.

Greta Thunberg, the 16-year-old Swedish climate activist, made an impassioned plea for the planet at the European Parliament, urging MEPs to “start panicking about climate change” rather than “waste time arguing about Brexit”.

For the first time, people in Germany who are in need of full-time care due to severe disabilities are allowed to vote – including in EU parliamentary elections.

Frans Timmermans, lead candidate in the European Elections for the PES group meets with EURACTIV’s Brian Maguire over a coffee.

As many as 77% of potential voters identify global warming as an important criterion when deciding who to vote for at the May European elections, according to an opinion poll.

If the EU wants to regain citizens’ trust after the European elections, it has to strengthen links with cities and regions, Stefano Bonaccini told EURACTIV.com.

Marine Le Pen’s party is no longer making calls to leave the EU or abandon the euro. Instead, the party is attempting to renew itself with a nationalist but locally anchored narrative.

Japan refuses to include a reference to a proposed reform of the WTO’s appellate body in the draft conclusions of an upcoming bilateral summit with the EU for fear of upsetting the US.

Belgium’s centre for cybersecurity has found no evidence that telecoms equipment supplied by Huawei Technology could be used for spying.

A series of end-of-term votes in the Strasbourg session of the European Parliament and Latvia’s PM closing the Future of Europe speech series.