The Brief: An Irish revolution 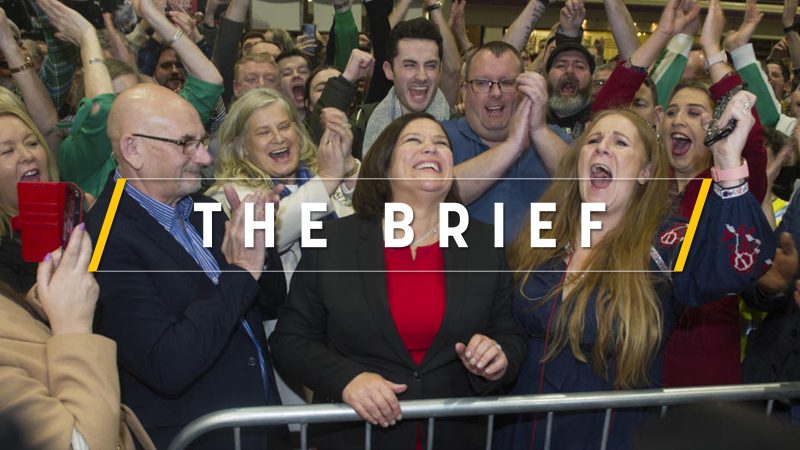 Ireland’s general election at the weekend has marked a watershed moment in the country’s political history, but the biggest winners, Sinn Féin, may not even take part in the next government.

The once ostracised, marginalised party has broken through the historical ranks of the Irish political duopoly to become the largest force at the election. However, the nationalist outfit fielded just 42 candidates for the 159 seats on offer, so their representation in the Dáil will be substantially diminished.

In an unprecedented upturn in support, Sinn Féin took home 24.5% of the vote  – overtaking Fianna Fáil, led by Micheál Martin, who obtained 22.2%, and pushing Leo Varadkar’s Fine Gael into third.

The allocation of seats in the Irish Parliament is likely to take several days to map out, but Sinn Féin will now most likely obtain around 40 seats in the new Parliament.

While Sinn Féin, Fianna Fáil and Fine Gael now face a potentially prolonged period of fractious talks to identify what form of a coalition will eventually take place, the result of Saturday’s general election is likely to impact the Irish political sentiment for years to come.

Sinn Féin was relegated to the backwaters of national politics following the 1998 signing of the Good Friday Agreement, which put an end to the violence of the Troubles – the three-decade conflict between unionists and nationalists.

The clashes reached their apogee in the armed campaigns that brought the Irish republicans and the Ulster loyalist paramilitary groups to a head.

Throughout the 1980s, Sinn Fein was mobilised as the political arm of the Irish Republican cause, and, following the 1981 Irish hunger strike, in which ten republican prisoners starved themselves to death, including IRA member and leader of the standoff, Bobby Sands, nationalism in Ireland experienced a resurgence in public opinion.

The image of more than 100,000 citizens lining the route of Sands’ funeral procession resounded around the country and Sinn Fein sought to capitalise on the rise in public support by contesting elections both North and South of the border

The question that emerges from Sinn Fein’s political back-catalogue is this:

To what extent does the party still harbour those same sentiments that led them to support armed conflict for the cause of Irish unification? Looking at this weekend’s election results, you’d be hard-pressed to argue anything other than that a (peaceful) political revolution is currently taking place in Ireland.

Now comes the laggard and exhaustive process of ‘options being explored.’ Sinn Féin will demand a role in the next Irish government, but, due to the party’s chequered history, neither Fianna Fáil nor Fine Gael has been too keen on establishing a partnership with Sinn Féin leader Mary Lou McDonald.

Fine Gael’s Varadkar, who is expected to be forced out soon, despite wanting to stay on as leader, has been more steadfast in his opposition to Sinn Féin, while Fianna Fáil’s Micheál Martin didn’t rule out the possibility yesterday but said there were “significant incompatibilities” with working with McDonald.

Putting aside the concerns surrounding Sinn Féin’s backstory, it’s worth stressing that public support for the party is probably more to do with policy than politics.

Despite Ireland’s relative economic success following the bailout that came after the 2008 financial crisis, a number of issues have dogged the public’s perception of Varadkar’s leadership, who has been propped up by opposition party Fianna Fáil.

A shortage of housing, rising rent costs and homelessness are areas that Sinn Féin have pledged to improve, and represent fields in which Fine Gael’s track record has been woefully exposed in the past.

In reality, there are two likely outcomes from Saturday’s election:

One, that Fianna Fáil and Fine Gael manage to find an (unlikely) agreement so that they continue to govern together (in a move that is likely to provoke a great degree of public resentment).

Or, two, that one of the mainstream parties comes to terms with the fact that refusing to work alongside Sinn Féin in government would mark a profound dereliction of the democratic will.

While those intent on holding on to the reins of power are unlikely to loosen their grip anytime soon, McDonald’s admission over the weekend that Irish citizens had enacted a “revolution in the ballot box” is not an overstatement.

Sinn Féin, long marginalised as a radical nationalist and leftist outfit, have contracted the support of the Irish people, and are duly merited the right to enter the doors of the Dáil as government members, in full knowledge of the fact that their presence in Parliament marks the irredeemable devastation of the two-party political system in Ireland.

Annegret Kramp-Karrenbauer has announced her intention to resign as leader of Germany’s CDU party. The news comes amid on ongoing political spat in the German state of Thuringia, which is reeling from post-electoral hangover after far-right alliance fiasco.

While China has shown it needs a few days to build a hospital, infrastructure projects in Germany are making no progress. But politicians from the conservative Christian Democratic Union (CDU) now want to change this.

NATO’s public image in France, Germany and the US worsened sharply after US President Donald Trump and French President Emmanuel Macron questioned the value of the Western alliance, according to a new study.

Long-term President Ilham Aliyev’s ruling party won a majority of seats in Sunday’s snap parliamentary election, according to exit polls. The main difference compared to past elections is that many more young and Western-trained people are expected to fill the 125-seat Azeri Parliament, writes EURACTIV’s Georgi Gotev from Baku.

The European Investment Bank (EIB) decided to scrub its loan books of fossil fuels in 2019 but the lender’s head of energy policy. Andrew McDowell insists that there is more to the change of direction than ditching coal and gas.

In the light of a milestone agreement on next-gen biotech, Italy’s agricultural minister Teresa Bellanova has expressed an interest in developing sustainable biotechnology.

One response to “The Brief: An Irish revolution”