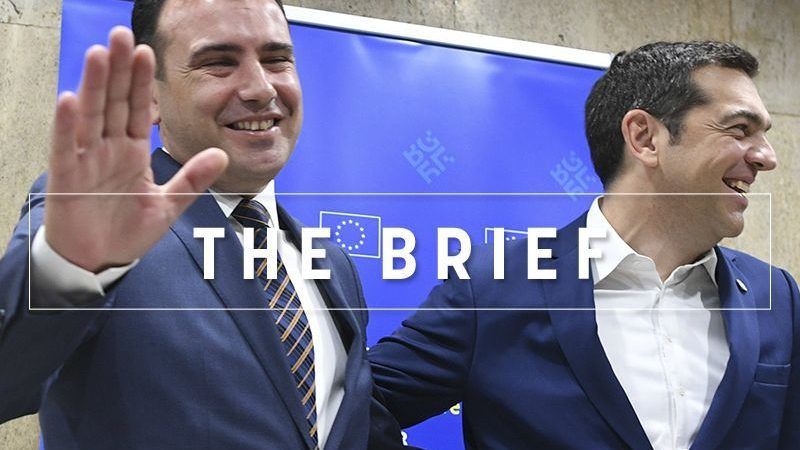 On the same day, 12 June 2018, anti-system politicians in two wildly different spots of the globe did their best to solve the world’s most complicated conundrums.

In Singapore, the anti-system US president and the outcast leader of communist Korea became buddies, while normally they would have been about to nuke each other. And in the Balkans, a left-wing prime minister who never wears a tie and his new colleague from across the border apparently found the solution to the 27-year old Macedonia name dispute.

Call it creative disruption, call it a miracle, but here we are, and the world is no longer the same. What is certain is that a systemic politician like Hillary Clinton would not shake hands with Kim, and that a prime minister of the traditional political class in Greece, no matter left or right, would never change positions on Macedonia, not in a thousand years.

It is, of course, important to see if this anti-system diplomacy will work and if the results will prove to be sustainable. It will not be easy, as the systemic forces will try to strike back.

In Greece, the traditional political class is already getting organised to sabotage the agreement, hoping that such a scenario would allow it to return to power. Exactly the same thing is happening in the Republic of Northern Macedonia.

The EU has pushed Athens and Skopje toward an agreement.  This was made in a shy way, as the name dispute negotiation was a UN-led process. But without Tsipras in Athens and Zaev in Skopje, nothing would have happened.

Tsipras embodies a politician who is not responsible for the mess Greece is in. Zaev is the rarest breed of Balkan politicians, immune to nationalism. The anti-system stars in the Balkans had aligned.

For the EU, the lesson to be learned is that a bit of creative disruption could be a recipe to be applied in the case of other stranded international dossiers, like the Middle East peace process, the relations with Russia after the annexation of Crimea, the difficult relations with Erdogan’s Turkey, the Cyprus reunification, the relations with the neighbours, but especially with the transatlantic relations.

If the best the EU has come up with for Donald Trump is the tit-for-tat tactics, this is hardly a good idea, as pundits have argued. And the EU should better consider a lot more of creative disruption in the way it handles the Brexit talks, if it wants to avoid the double trouble of a hard Brexit.

The problem, of course, is that for the time being, the EU’s foreign policy [if there is such a thing] is as conservative as the Catholic Church during the Inquisition. It’s healthy that the political cycle in member countries brings new faces, and some of them, like in Italy, are anti-system.

The European elections will bring more such faces and that is not necessarily a bad thing.

What’s in a name, you might ask? But after 27 years of shattered relations, Greece finally reached a deal with Macedonia in the quest to find a new name for its northern neighbour. The long-awaited end of the dispute opens the road for Macedonia to start EU talks and join NATO.

As MEPs in Strasbourg debated the need for agreement on the asylum system ahead of the crucial June EU summit, ALDE’s Guy Verhofstadt threatened to take Council to court for ‘failure to act’.

Speaking to the Strasbourg plenary (however, again an empty one as he pointed out), Dutch PM Mark Rutte criticised proposals to deepen the bloc’s integration and rejected the Commission’s new funds for a monetary union.

British PM May avoided a humiliating defeat in the House of Commons on her government’s EU withdrawal bill, but only after appearing to offer concessions to rebel MPs an effective block on a ‘no deal’ Brexit.

Italy’s decision to turn a blind eye to the plight of migrants is all the less comprehensible as the country has a strong history of migration, a Nobel Peace Prize laureate told our Claire Stam, reporting from Bilbao. The MS Aquarius case exposes a strained Dublin asylum system.

Does France take its fair share of migrants? Italian PM Conte slammed French ‘hypocrisy’ in the migrant convoy clash as the figures tell a different story.

Controversies over her refugee policy returned to haunt German Chancellor Angela Merkel while she negotiates a broad EU asylum deal. It is the first major discord within her uneasy ruling coalition.

Ahead of the tenth anniversary of the Russo-Georgian Five-Day War, the EU assured Georgia that it has not given up seeking a “true solution” to the conflict over its two breakaway territories.

The European Central Bank gathers for a two-day Governing Council session in Riga tomorrow, in what some commentators say might be President Mario Draghi’s most awkward meeting following banking scandals.

The 21st edition of the FIFA Football World Cup kicks off in Russia tomorrow. The opening match is Russia vs Saudi Arabia, but it will be just as interesting to see who among the top European politicians will show up at the opening ceremony. (And, by the way, Spain just sacked their national coach).