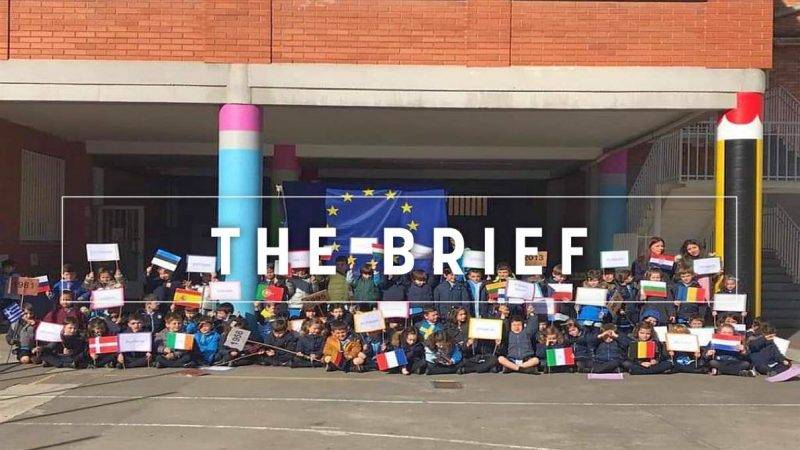 The Brief is EURACTIV's evening newsletter. [Photo: via Jorge Valero]

This month I went back to my old school. Exactly twenty years after I left, I was invited to talk to my six-year-old niece and her classmates about the joys and miseries of being a journalist and, of course, about Europe.

It was a refreshing experience to listen to their questions when I described Brussels as our playground, where we have to listen to every side when there is a fight.

And it was encouraging to hear them asking ‘why?’.

Why Trump was angry with us. Or how come a Swedish girl not much older than they had to convince her parents, her teachers, and half of the planet, to march that very same day to save the planet.

But when we spoke about why we remain together despite the constant twists and turns of our fragile Europe, they didn’t look for reasons.

We work in groups, they told me. And sometimes that means helping your friend who is not very good at painting and listening to what others have to say.

We are better like that, and none of us should fall behind, they said.

Unfortunately, the reality beyond the school walls is rather different. My niece may earn 20% less than her male colleagues when she starts working. Her rights would be teetering if she grew up further east in our continent.

And her future would look gloomier if she had been born on the other side of the Mediterranean.

Europe is becoming less united in diversity and simply more unequal because that commonality we shared is fading away precisely when the challenges are becoming more global.

We cannot progress on having fairer taxation, better protection for our unemployed people and savers, or supporting those who were less lucky than us by birth because national interests triumph over European goals and values.

As wordsmiths, we kept writing about this. But, as journalists, you should think twice before you get your hands dirty.

But accidents happen. A few months ago, I met Colombe, the co-founder of Volt. What was supposed to be a background chat for a story became a brainstorming session about how to restore the faith in our Union and bring citizens back to the heart of the project.

When I went back to my newsroom I told my editor I would no longer write a word about them, because this time I did not want to tell the story but be part of it. Keeping a Chinese wall around my work was a worthy price to pay.

For a journalist, the story of a pan-European party, standing in the EU election with a single rock-solid programme, and not just a simple manifesto, is very appealing.

But it was even more encouraging to meet hundreds of people last weekend in Rome and discuss a progressive migration policy, a smarter economic model and a fairer European society.

We spent hours talking about the present of our movement and the future of our Europe. And I kept thinking about the last image I shared with my niece and her smiley classmates. A cartoon of my dearest Mafalda saying “the future is ahead of us” pointing to a crab walking backwards.

Moving forward has become an uphill battle in today’s Europe. But by joining more than 15,000 people from Italy, France, Germany, Bulgaria, and more than 30 countries, I believe that I am on the right side of the story.

It was supposed to be Brexit day but after another vote on Theresa May’s deal went belly-up, now it’ll be 12 April. Look forward to a last-gasp crisis summit on 10 April.

The European Commission admitted that relations with Romania had become “heavier” because of the case of Laura Codruța Kövesi, the top candidate for the post of the chief European prosecutor.

The WTO requested a final fix in the EU-US aircraft subsidy war after a series of tit-for-tat exchanges between both sides of the Atlantic.

Germany extended a ban on exporting arms to Riyadh for another six months in a decision that strained ties with fellow European arms exporters.

Since the start of the year, Austria has been working towards adapting family benefits to the costs of living of the employee’s home countries. The EU criticised the Vienna government – but it has withstood.

International Monetary Fund chief Christine Lagarde called on eurozone leaders to complete the banking union by reaching an agreement on a common guarantee for savings.

Facebook has unveiled a raft of measures to prevent foreign campaigns from interfering in national elections – with a twist for the upcoming European elections.

Besides another very crucial Brexit vote that coincides with April Fools Day, look out for the Brussels session of the European Parliament and NATO’s 70th anniversary week.