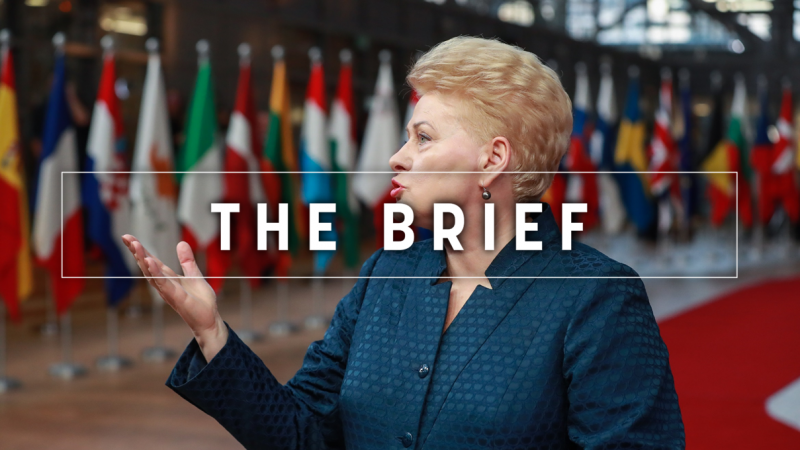 Lithuania’s prime minister appointed a new environment chief yesterday and in doing so made his government the only all-male administration in the EU.

It comes as somewhat of a surprise, at least to those of us not totally clued up on Lithuanian politics, given that the country’s president, Dalia Grybauskaitė, is one of Europe’s most respected leaders.

Her EU Council doorsteps are also regularly the highlight of boring summits.

She was Lithuania’s first female president, as well as its first Commissioner, so it must not be too much of a leap to imagine that she is rather disappointed in the current state of affairs.

Saulius Skvernelis, the current prime minister, is running to replace Grybauskaitė in May elections, so don’t expect any feminist tendencies from his mandate if he gets the nod. The incumbent leader cannot run again after two terms.

Hope could come in the form of current EU health boss Vytenis Andriukaitis, who is now on Commission gardening-leave to run in the May election. A quick scan of his cabinet shows that women outnumber men two to one.

Unfortunately, the affable health chief is likely to join Commission-colleague Maroš Šefčovič in the club of failed presidential candidates, if current polls are anything to go by.

The EU has plenty of work to do in the quest for gender equality but progress is happening, slowly but surely.

At the beginning of his presidency, Jean-Claude Juncker said 40% of middle and senior management positions should be filled by women. In February, the figure stood at just over 39%, up from 30%.

But how likely are we to see a woman lead one of the main institutions by the end of the year? There has never been a female head of either the Commission or Council.

The liberal ALDE party recently unveiled its ‘Team Europe’ of lead candidates and made good on its pledge to name women among its ranks. Margrethe Vestager is the marquee name but she faces obstacles in her quest to head the EU executive.

Popular Irish MEP Mairead McGuinness, who was beaten to the Parliament presidency in 2016 by Antonio Tajani, is set to contest the post again. She would only be the third female leader, following in the footsteps of Simone Veil and Nicole Fontaine.

In the Council, it’s anybody’s guess. Grybauskaitė will be out of a job just in time, some have tipped Angela Merkel to hand over to Annegret Kramp-Karrenbauer early and enter the race or maybe Vestager would get the nod at Justus Lipsius instead of the Berlaymont.

If Lithuania is anything to go by though, we’ll probably end up with the same raft of white middle-aged men that we normally do.

While the Brexit deadlock continues, the EU has stepped up its preparation for no-deal.

Macronists want to push the political boundaries of the liberal ALDE group after the May EU elections, going as far as suggesting a name change for the centrist force.

Migration is not the primary concern of European voters. Corruption, unemployment and cost of living feature higher.

All citizens are (not) the same in Croatia, it appears, as bureaucratic obstacles block solutions for decades.

Some Chinese investments entail “macro-economic imbalances and debt-dependency” risk in the Western Balkans and impact EU objectives in the region.

The EU can only be a strong voice for democracy in the world if all 28 member states stand up for the principles of democracy at home, Swedish Prime Minister Stefan Löfven told EU lawmakers.