The Brief, powered by EVA – Bringing back some rationality 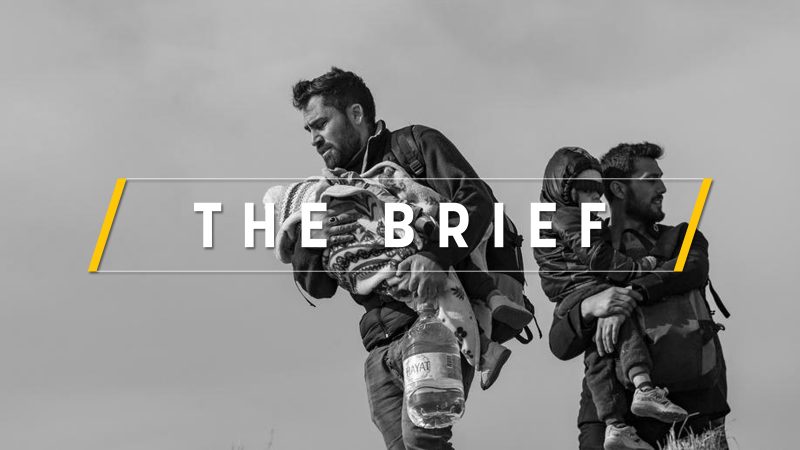 More and more desperate people are fleeing from Idlib, Syria, and waiting at the Greek-Turkish border in the hope of getting into the EU. During the 2015 refugee crisis, it was possible to enter Germany – this time around, it’s different. What has happened in the past five years?

“Wir schaffen das [we can do it],” a confident German Chancellor Angela Merkel said in August 2015 in the face of rising refugee numbers.

Shortly afterwards, Germany opened its doors to refugees, asylum seekers and migrants who flew Syria, Afghanistan and other countries at war.

At that time, Angela Merkel shrugged off the already emerging criticism by saying: “If we now start having to apologise for showing a friendly face in emergency situations, then this is not my country.”

“We need order at the external borders of the European Union. We will support Greece with all our might in this respect. Europe’s borders are not open to refugees from Turkey, and this also applies to our German borders,” the German interior ministry tweeted this week in several languages, including Arabic.

How can this U-turn be explained?

The German Central Council of Muslims summed it up very clearly after a right-wing extremist shot nine people dead in the city of Hanau in February.

“The terrorist of Hanau may have been a lone perpetrator, but his murderous racist ideology is by no means an isolated case and does not stand alone, as the frightening election results show and as fascists in radical right-wing parties in our country prove almost daily,” it said in a statement.

“Mölln, Solingen, Rostock-Hoyerswerda, Marwa El-Sherbini, the NSU series of murders, Lübcke, Halle, not to mention Christchurch, Oslo, Pittsburgh in the international context, have left a long trail of blood (…) in Germany.”

This “long trail of blood” can be traced back to the open-door policy of 2015, which for many observers has contributed to the political revival of what was at the time a relatively quiet AfD.

The far-right party is now so vocal that it has managed to split the once unwavering CDU into two camps: one that wants to draw a clear dividing line with the AfD, and the other, well, advocating an open-door policy with the party.

What this means is that even if Berlin agrees that an untrustworthy partner (Turkey) is playing the refugee card to put pressure on the EU and NATO, leading German politicians in the governing coalition do not have a proper strategy because of the ongoing debate about how to deal with the AfD and the migration issue.

Instead, they are worried about Erdogan’s latest steps – urging the thousands of starving families stranded at the Turkish-Syrian border to go to the EU. And many in Berlin are aware that far too little has been done in recent years on the refugee front.

So, at a time of highly sensitive political developments, let us recall some economic facts in the hope of bringing back some rationality to the debate:

That means that Ankara does depend on European investors. The EU, and Germany of all countries, do hold cards in their hand and should not be paralysed by fear and the sense of emergency. For the sake of refugees and of the European Union.

European Commission President Ursula von der Leyen said “there might be momentum” for improving the EU’s relationship with the US, but it remained unclear when she will present a trade offer to US President Donald Trump to avoid further tariffs.

The Commission insisted on Wednesday that complex climate number-crunching has to be finished before it can update an emissions-busting target for 2030. Here’s how the EU’s next top climate model could make or break its green agenda.

EU Brexit negotiator Michel Barnier gave his assessment of the first round of talks with the UK this week: “very serious differences” exist between the two camps. Boris Johnson denied that he would seek an extension because of the coronavirus.

The Central European University (CEU) hailed an opinion from the advocate general of the EU’s top court, which said restrictions imposed by Hungary on foreign universities breach WTO and EU law, but said that it will continue to transfer its operations to Vienna.

The virtues of digital farming have been extolled by many, including the Commission and industry voices. But digital farming carries concerns which require careful consideration, as a recent situation in the US demonstrates. More farm news in this week’s Agrifood Brief.

While insect-based foods have so far been a niche product, they are viewed as a highly promising solution to the challenges facing the food industry. Although new EU regulations should pave the way for these products, European eating habits will have to change too.

Don’t miss this week’s coronavirus edition of the Digital Brief and roundup of foreign affairs in the Global Brief.

One response to “The Brief, powered by EVA – Bringing back some rationality”