The Brief, powered by AmCham EU – Curtains for Germany’s government 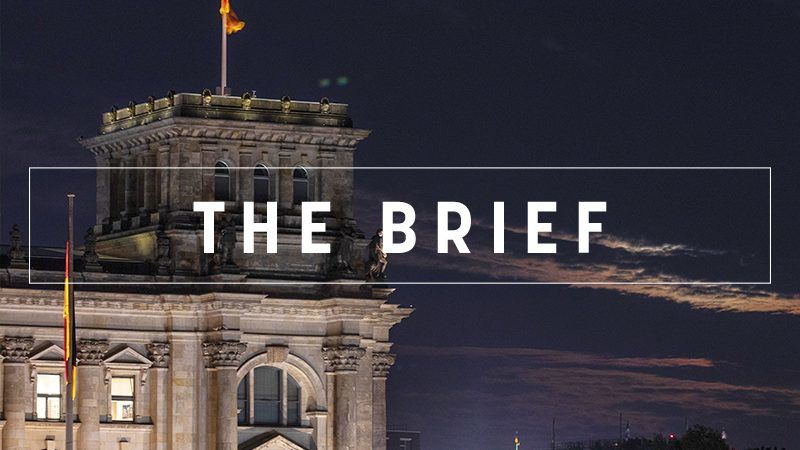 It’s been exactly a year since the federal elections took place in Germany, on 24 September 2017. A year after, vessel Germany is floating aimlessly in stormy waters, its commanding team proving incapable of setting a direction. And no safe shore is in sight.

On Sunday evening, the coalition government of Angela Merkel’s Christian Democrats (CDU/CSU) and the Social Democrats (SPD) staved off its collapse by reaching yet another compromise, this time over the fate of the embattled ex-intelligence chief.

Hans-Georg Maaßen will stay in the Interior Ministry as a consultant. The controversial intelligence chief will get the position of a “special adviser to the Federal Minister of the Interior” and operate in the rank of head of department.

With a B9 salary level, which corresponds to a gross income of €11,500 per month, he will receive no salary increase.

His task will include “European and international affairs”, which involves the agreement of repatriation agreements for refugees with other European countries as well as agreements with African countries.

But the latest compromise will not manage to stifle the enormous public outcry which emerged in Germany following Maaßen‘s demotion-promotion. On the contrary, it is only refuelling the criticism of the coalition government, known as ‘GroKo’ in Germany.

“Horst Seehofer is out of control. Angela Merkel is just watching. And Andrea Nahles is simply overwhelmed. She made one mistake – and when she wanted to correct it, she made yet another one. It’s enough. This government is finished. It should resign,” the respected German journalist and publisher wrote.

Augstein argues that citizens should now be able to elect another government, but in Germany, mainstream politicians are increasingly afraid of the voters because of the rise of the far-right AfD and this is hindering the democratic process.

But the upcoming Bavarian election might rock HMS Deutschland even more strongly.

Just three weeks before the elections take place, polls released today show that support for the CSU remains at an all-time low of 36%.

AfD is expected to reach 13.2%, shedding 0.5 percentage point compared to two weeks ago but still in front of the SPD, which is predicted to get 12% of the votes.

But not all is bleak. Unnoticed in the shadow of the populists’ rise, one political group is emerging as the big winner: the Greens. They are nearing the 20% bar, gaining 1.4% in the last two weeks to reach 17.9%.

The oh so unpopular GroKo is facing its final curtain, and the coup de grace may come from Bavaria.

What do boat-building in Scotland, cows gone digital in the Netherlands and improving healthcare for mothers in Romania have in common? For one, they are all examples of American companies’ commitment to people and communities in Europe – beyond jobs and investment. Read our 31 stories (and counting) on InvestedinEurope.eu.

The Commission sent a stark warning to the UK government over ‘fictitious and false invoices’ and incorrect customs value declarations.

Major money-laundering investigations were conducted in southern Finland this weekend. But Finns are not concerned only out of financial reasons – the company owns numerous strategically located plots of land on the coast that could potentially be acquired by Russians.

More than just hot air? Global oil and gas majors pledged to limit methane emissions by 2025, as the fossil fuel industry moves towards curbing one of the most potent greenhouse gases.

A “game-changing” development for the housing market takes place as banks join up to EU-backed pilot scheme for green mortgages.

In a late-night meeting, the UK’s opposition Labour Party debated an exit from Brexit and took a decision to adopt a stance on their support for a second Brexit referendum by conducting a vote among members.

Last week’s hide-and-seek game is over: the Commission referred Poland to EU’s top court, upping the ante in the dispute with Warsaw over a controversial legislation on the judiciary.

EU stakeholders are playing ping-pong with the body that will be responsible for deciding whether or not to break business confidentiality – the ‘hot potato’ of new EU transparency rules on food.

Farming accounts for around 60% of all jobs in sub-Saharan Africa. Read our Special Report on why for Tanzania, cashew nuts mean the future.

EU Jam: Commission energy boss and broad-shouldered Spitzenkandidat Maroš Šefčovič gave Facebook a masterclass in dunking this weekend. Maybe the race to be the next Juncker should be settled on the basketball court?