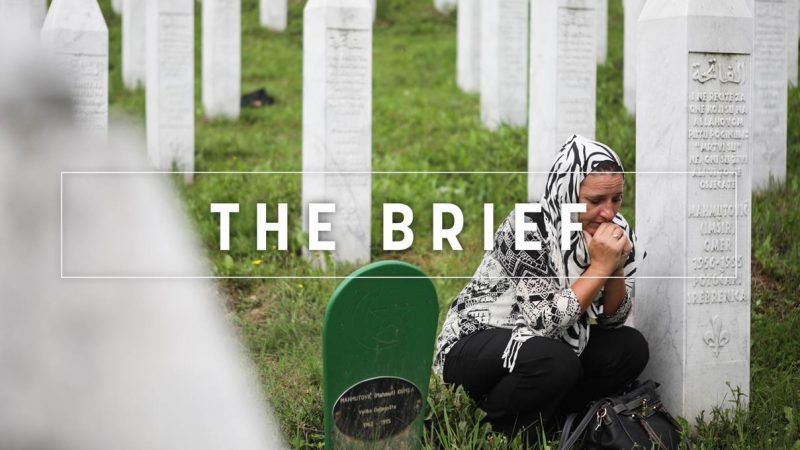 Twenty-three years ago to the day, modern Europe lived through one of its most shameful moments.

On a scorching July day in Srebrenica, eastern Bosnia, a battalion of lightly armed Dutch UN peacekeepers, operating on a vague and restrictive mandate, stepped aside and allowed Bosnian Serbs to commit what is commonly referred to as the biggest atrocity in Europe since World War II.

In the ensuing days, the Serbs killed around 8,000 Muslim men and boys and bulldozed their bodies into mass graves.

The writer of this Brief happened to be one of the first reporters to talk to Srebrenica survivors, in a sprawling, makeshift camp on government-controlled territory. It took a few weeks to collect testimonies from crying women and traumatised men and shape them into a coherent narrative that unambiguously accused Europe of failing to act.

The United Nations and the US bore their share of the blame, but it was primarily Brussels, and the inefficient and overcautious EU bureaucracy, that could not handle the disaster unfolding in its own backyard.

Srebrenica was the turning point, as it nudged US President Bill Clinton into action, with Washington leading NATO bombing of Serb military targets.

Driving home the sense of Europe’s inadequacy, it was the US that organised peace talks in Dayton, Ohio that formally ended the war. By the end of 1995, more than 60,000 NATO troops, one-third of them Americans, were deployed in Bosnia.

Fast-forward to the present day and try to imagine, for a moment, what would happen if such atrocities were taking place somewhere in Europe as we speak.

Would the EU be able to reach a fast decision about what action to take? Would all 28 agree on the same course of action? And if they did, would they have the proper military might to deploy, even if only as a deterrent? And would they be willing to actually commit ground troops?

If the answer is no-no-possibly-possibly, Europe would do well to stop and rethink its shaky alliance with America. For all his disruptive acts in the past year, Donald Trump is right about one thing: the US largely foots the bill for NATO, contributing more than a half [in some years closer to two-thirds] of its budget.

Calling Trump “the biggest challenge Europe faces today” one day, and then pleading with him to remember that “we are allies” when it comes to defence, may not be the best tactic, not to mention an exercise in hypocrisy.

Unless the EU is suddenly ready to be weaned off and is serious about boosting its own defence capabilities, even though it might take years…

Olives have become the subject of new US tariffs, the EU is waiting to study the details of the decision before responding accordingly. Trump obviously got up on the right side of the bed as he started his morning with a verbal attack on Germany.

Change might be in the air, as the man behind Romania’s bid to join the EU urges his country to start making the best of its membership (finally).

According to new data, renewable energy sources met more of Germany’s electricity needs in the first half of 2018 than coal. And international oil companies believe they have everything necessary to take part in the global renewable energy revolution.

But a new assessment reveals that we are still far from reaching the Sustainable Development Goals set by the UN.

New food scandals could arise as the European Commission continues to serve the interests of big companies.

It’s the end of a dark chapter in the euro currency as the Commission adopted measures today to monitor Greece’s fiscal policy after an eight year bailout programme. The Commission also approved a plan for a voluntary system for certifying the security level of tech products.

Greece’s Alternate Economy Minister Alexis Charitsis told EURACTIV that neoliberalism and  the far-right are “two sides of the same coin” in times of crisis.

Another day at the NATO summit in Brussels, what more can we expect.

Les Bleus have secured a ticket to the final on Sunday, time to find out who they will face as England and Croatia go head-to-head.