The Brief – Farage marches on 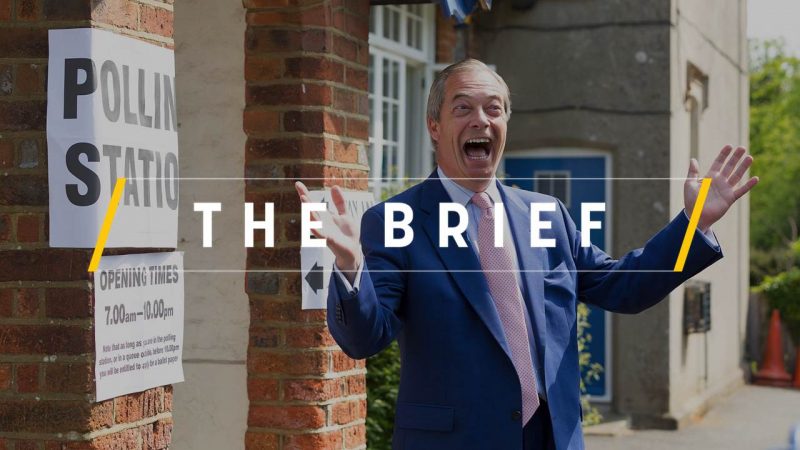 Days after storming to victory in last month’s European elections, the Brexit party is expecting to elect its first MP on Thursday (6 June), in what is yet another shot in the arm for its smiling leader, Nigel Farage.

And it comes just days after Farage met his political hero, Donald Trump.

The timing and circumstances of the by-election could hardly be better for Farage’s new party.

Peterborough – a commuter town an hour north of London – is historically a Labour/Conservative marginal. It was narrowly won by Labour in 2017.

However, Labour MP Fiona Onasanya was removed from her position on May 1, following a petition for her recall launched after she was jailed for perverting the course of justice by lying to police to avoid prosecution for a speeding offence.

Labour’s new candidate has faced accusations of anti-Semitism, allegations of which have been made with a worrying regularity under Jeremy Corbyn’s leadership.

But the Conservatives are in turmoil over Theresa May’s handling of the Brexit negotiations, which is forcing her to stand down as prime minister on Saturday (7 June), and fell to just 9% in the European elections, while Farage’s party is riding the crest of a wave.

Bookmakers have stopped taking bets on whether Brexit party candidate Mike Greene, a businessman who appeared on the TV show ‘Secret Millionaire’, will win the seat.

The Brexit party has maintained a strategy similar to its successful European campaign. It has no local councillors and little local organisation – meaning they have little data on where their local vote is.

Instead, they have focused on what they’re good at: social media campaigning and holding regular packed-out rallies with Farage and other leading party personalities.

Before the European elections, Farage vowed that his new party’s main target was the next general election. That is likely to be within the next six months, particularly if Theresa May’s successor tries to force through a ‘No deal’ Brexit despite the opposition of UK lawmakers.

Greene says 700 volunteers have joined his canvassing effort in the constituency.

The question is whether the Brexit party can keep up this momentum. It doesn’t (yet) have the volume of voter ID that the long-standing parties rely on. Social media and campaign rallies are not effective ways to get the vote out, especially when you are fighting in more than 600 constituencies.

Farage’s party has continued to poll strongly in surveys on voting intentions for the UK’s next general election.

We have, however, been here before.

UKIP, Farage’s previous party, won two Westminster by-elections in 2014, in the six months after the European elections, but soon fizzled out. At the general election in May 2015, they got only one MP elected and Farage suffered his seventh defeat in a Westminster seat.

But the Brexit party looks like it has more staying power and talent in its ranks than UKIP. And it has the competition running scared.

French parties rebuff a call from Macron’s government to create an “équipe de France” in the European Parliament, as it would mean siding with MEPs of Marine Le Pen’s Rassemblement national.

The Commission has made extensive recommendations for all 28 members, including guidance on how to improve transport links and boost sustainability through shrewd investments.

Are we saying ‘no to drugs? Cocaine seizure in the EU reached record highs in 2017 and the trafficking of synthetic drugs has also increased, according to this year’s European Drug Report.

Fiat-Chrysler withdrew its $35 billion-plus merger offer to Renault, only 10 days after launching it, blaming French politicians for the collapse.

In an exclusive interview, a former EU Commissioner and Romanian prime minister said that the country’s current government can only be trusted once it has resigned.

For the EU, enlargement has become a ‘hot potato’. Which is why EURACTIV organised a roundtable, where diplomats from the Western Balkans EU hopefuls explained their frustrations with the EU’s half-hearted, stop-go approach.

But troubles don’t end once you join the EU. Read our daily roundup, The Capitals, to find out how the Netherlands blocked Bulgaria’s Schengen accession, citing corruption and human trafficking.

All you need to know about this week’s news from the digital world is in our Digital Brief, run by Samuel Stolton.

Commission boss Jean-Claude Juncker in Croatia for talks with PM Andrej Plenkovic, who is one of the two EPP’s designated pointmen for talks with other political groups in the new EP.

One response to “The Brief – Farage marches on”