The Brief – Know your role 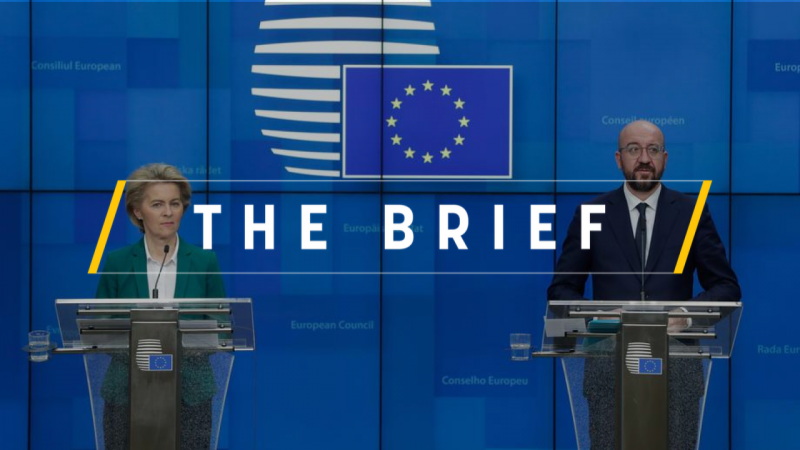 The EU’s stuttering response to the coronavirus outbreak has exposed some fundamental weaknesses within the bloc’s institutions, particularly in the European Commission. The executive branch of the EU needs to take a long hard look at its job description.

If Ursula von der Leyen’s Commission can be compared to a type of food, this Brief’s author would suggest the generic staple dessert of British schoolchildren: custard.

Depending on who you ask, custard can be a liquid or a solid, taste sweet or of nothing, occupy the container you pour it into or stubbornly stay in a block. That aptly describes this administration, because it is difficult to pin down what exactly it does or what it aims to do.

The virus pandemic needs a coherent and quick response to mitigate the damage. Although the very structure of the EU has always made speed a difficult trait to come by, von der Leyen’s tack during the crisis has not helped things.

Her dismissal – in German – of ‘coronabonds’ as “just a slogan” stirred up an already fractious debate about debt mutualisation, which von der Leyen’s services then tried to bat off as a ‘lost in translation’ moment.

A joint economic response to the virus is still elusive and the Commission has resorted to massaging the most out of the remaining EU budget while drawing up a new proposal for the next one.

When von der Leyen got the top job last summer, the more pessimistic among us warned that she would be an EU Council shill, incapable of leading independently because of the way she was appointed – over the dead corpse of the Spitzenkandidat process.

That appraisal gained more legitimacy on Tuesday, when the Commission’s plans to publish an exit roadmap from the outbreak were quickly slapped down by member states.

France, Italy, Spain and others reportedly had their noses put out of joint and aired their grievances. The roadmap has been shelved until after Easter and is now effectively redundant because governments will in the meantime press on with their own policies.

And this risks opening a Pandora’s Box of incompatible measures between neighbouring countries and even more chaos in sectors like the travel industry.

Von der Leyen is president of the Commission, not the Council. It is Charles Michel’s job to consult with leaders and organise their meetings for them. Nor is she the head of the Council’s secretariat, so she should stop acting like it.

Excuse my probably Anglo-Saxon view of the EU’s executive branch but now is not the time to try and prove critics of “the geopolitical Commission” narrative wrong. This crisis needs von der Leyen’s services to do push what is politically possible rather than be a passive victim of its current limitations.

It is supposed to be ‘the guardian of the EU treaties’ – in Eurospeak – which essentially means stopping member states from pursuing their own interests too fervently and protecting the bloc from itself.

The poor virus response has already sowed discord among the ranks. The head of the European Research Council, Mauro Ferrari, resigned yesterday after a falling out with the Commission.

Ferrari had proposed an ambitious programme to help fund a quick response to the virus and even worked with von der Leyen on tweaking his plan but it was ultimately nixed internally. The Commission and the ERC now say that he was asked to resign nearly two weeks ago.

The previously “fervent supporter” of the EU told the FT he is rethinking that stance. Its institutions clearly need to pull themselves together before that other contagion, Euroscepticism, flares up again.

A Eurogroup meeting ended without an agreement this morning, after a marathon teleconference failed to bridge the divide between member states.

The International Labour Organisation warned that lockdown measures are provoking “devastating” consequences for the global job market, which will be “the greatest test for international cooperation in 75 years”.

Racism against Chinese and other Asian people has spiked, according to a new report, as the outbreak stokes xenophobic sentiment across the EU. Roma people are also among those at most risk from the virus.

Austria declined to sign a statement aimed at decrying the rule of law slide in Hungary last week. EURACTIV Germany reports on how Vienna is approaching developments in Budapest in its own way.

Another day, another set of practical guidance from the EU. This time it is about cruise ships and seafarers, as well as dedicated ports that can handle sanitary and quarantine measures.

ECJ judges sided with the Commission in the latest round of cases against Poland’s judiciary changes. Warsaw must immediately suspend its Disciplinary Chamber of the Supreme Court within one month or face sanctions.

UK Prime Minister Boris Johnson is reportedly responding to treatment for his viral infection. A US study has warned that the UK could be worst hit out of any European country by the outbreak, due to lack of intensive care beds.

Finance ministers reconvene tomorrow to try and hammer out a deal.