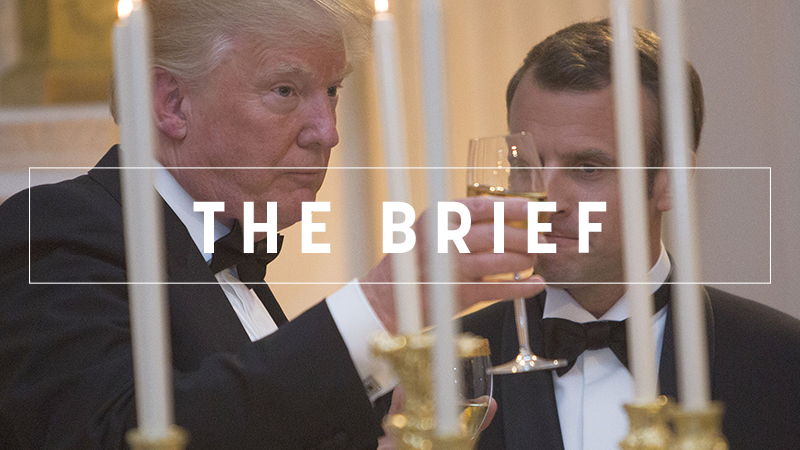 Such is Emmanuel Macron’s ‘golden boy’ status that he is the subject of the Brief for two days in a row. But that should come as no surprise – no other European leader has been brave enough to kill Donald Trump with kindness.

While most European leaders try to keep the maverick US president at arm’s length, the French head of state tried a new tactic: public displays of touchy-feely affection with straight-talking.

After touching hands and shoulders with the Commander in Chief – with Brigitte and Melania getting to know each other during a three-day State visit – Macron pulled no punches in his address to Congress.

In his speech – in English – another break with Gallic tradition, Macron’s criticism of Trump’s policies was only thinly veiled, whether exhorting greater efforts on climate change because “there is no planet B”, or calling for “multilateralism” over the alternative of “isolationism, withdrawal and nationalism . . . that will only inflame the fears of our citizens.”

He also reiterated his support for the Iran nuclear deal, which the US President wants to tear up.

If nothing else, Macron’s visit has pushed Theresa May into action. May’s office confirmed on Wednesday (25 April) that Trump’s first official visit to the UK will take place this summer, although he will not be afforded the honour of a State Visit, replete with Queen Elizabeth.

It is no secret that Macron sees an opportunity to become an unlikely bridge between Europe and the US and that he wants to re-establish France as a foreign policy heavyweight. That is underscored by the fact that Macron’s next foreign visit is to Vladimir Putin next month.

For the moment, Macron may be putting Angela Merkel and May in the shade, but the unlikely ‘Bromance’ is fraught with danger.

Of course, this is not the first time that a bright-eyed centrist European leader cosies up to a right-wing Republican. Just under 20 years ago, Tony Blair curried favour with George W. Bush and got a presidential medal, not to mention plaudits after his own address to Congress.

But Blair found to his lasting cost that Americans could not vote for him and that his own electorate would not be forgiving if personal chemistry did not translate into political influence.

Likewise, Macron does not appear to have secured any concessions from the US President, and even conceded that he was unlikely to change Trump’s mind on the Iran nuclear deal.

History records that the Blair/Bush dalliance did not end well. Mr Macron has been warned.

French President Emmanuel Macron has delivered a feisty speech to Congress, urging the US to embrace multilateralism while pushing back against President Trump’s “America First” agenda.

The House of Lords has re-opened the prospect of a UK government climb-down on the EU’s Customs Union. Brexiteers say that Brexit won’t really be Brexit if the UK ends up with a compromise that nobody wants.

Meanwhile, amid a row over attempts to restrict UK’s access to sensitive security information, the UK is now considering setting up a satellite navigation system to rival the EU’s Galileo project. Brexit on all fronts – even in space.

NGOs are breathing thin air in Hungary. To brace themselves from a possible government crackdown, they are seeking new funding sources and legal ways to counter a ban under a new “national security risk” law.

As the EU gets ready to come up with a climate strategy for 2050 and ongoing energy talks approach the finish line, the Mayor of Ghent warns that the targets are ‘almost impossible’ to meet without cities and regions.

Airbus and Dassault team up for a new fighter jet project as Europe seeks to enhance its strategic independence in defence policy.

A new report indicates that the EU carbon prices are set to double by 2021 and could hit €55 a tonne by 2030 if the EU aligns its emissions targets with the Paris Agreement on climate change.

The score is 1-0 to football superstar Lionel Messi, who won the backing of the ECJ ruling that the Barcelona player’s request for a trademark is legitimate.

The Annual Convention for Inclusive Growth 2018 taking place in Brussels tomorrow, a one-day event that will focus on the implementation of the Social Pillar, featuring Commission vice-chief Valdis Dombrovskis and Commissioner for employment, social affairs, skills and labour mobility, Marianne Thyssen.

One response to “The Brief – Macron alert, Bromance comes with strings attached”