The Brief, powered by BP – Green with envy, maybe ITRE 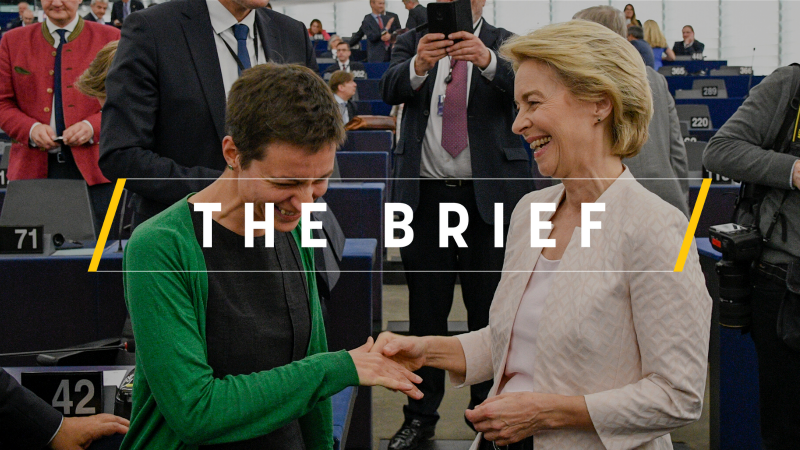 Ursula von der Leyen’s immediate headache is herding enough Commissioner cats to form a working executive. But the threat of the Parliament voting down her team still very much exists. What can the president-elect do about that though?

Three Commissioner candidates face the MEP music tomorrow and the UK is still in fully recalcitrant mood about naming its own pick.

If those outstanding issues are resolved, von der Leyen will see light at the end of the tunnel and she could indeed be president by Christmas or even earlier.

But MEPs still hold a final trump card: a plenary vote where a simple majority either way will decide the former defence minister’s fate. That is why Europe’s green lawmakers could prove to be decisive.

The Greens did well in May’s elections and, perhaps rightfully, expected that result to be reflected in the division of top jobs. But then von der Leyen was parachuted in by Emmanuel Macron to unclog the Council log-jam and the rest is history.

An attempt to block her candidacy in a plenary vote failed by just nine votes and now all the Greens have to show for their gains is a Commissioner and two main committee chairs, in transport and internal market.

According to signals coming out of the group, little has changed since July. MEPs Bas Eickhout and David Cormand even admonished von der Leyen in a letter about the Commission’s stance on supporting fossil fuels. Warning shots have been fired.

So the president-elect needs to win their support. Fast. But lo and behold! Romania may actually have given von der Leyen the tools to do so, in what might be a most bizarre twist of EU fate.

The nomination of Adina-Ioana Vălean by the new government in Bucharest frees up her current job as the head of the Parliament’s influential energy and industry committee.

It is hard to imagine a position that would appeal to the Greens more, heading into a five-year-period where energy and climate policy will be front and centre.

Von der Leyen would have to pull some serious strings in the EPP to swing it, which is by no means assured, but if the centre-right group wants their candidate to take power with a legitimate mandate, sacrificing ITRE could be the price to pay.

The Greens might also push for more if they smell real desperation. There is already a spat brewing about increasing the EU’s 2030 emissions target from the current 40%.

Incoming climate chief Frans Timmermans has been asked by his new boss to ratchet it up to 50%, while the Greens and others want 55% at the very least.

Horse-trading and favour-buying at this level already has a precedent and was even in full view today, when the Commission agreed to change the job titles of some of the incoming gang of officials.

The socialists pushed heavily for those concessions and are reportedly now likely to give French candidate Thierry Breton an easier ride tomorrow. The EU eco-system works.

Of course, the Greens have less power to torpedo the Commission than the socialists but the issue of legitimacy rears its head once more: von der Leyen might have to rely on the votes of the far-right again to take office.

Her one saving grace might be that, unlike the vote in July which was a secret ballot, the vote on the full Commission is fully transparent. But it is far from being a reliable safety net.

Extending an olive branch (or two) to the Greens is probably the better route to take.

***A message from BP: 40% of consumers surveyed by SYSTRA say a lack of charging points is a barrier to switching to an electric vehicle. Find out what the other barriers are and, crucially, how together we can remove them in this new independent transport research report, commissioned by BP.***

Commissioner hearings kick off at 8am tomorrow, stay tuned for live coverage. Three of the job titles not under scrutiny were tweaked today, catching the EU executive off guard. Its official statement wrongly stripped Virginius Sinkevičius of his environment duties.

The European Investment Bank will also hold a watershed-moment vote on scrapping fossil fuel funding. Or at least that is the plan. Germany might abstain and the EU lender could delay the ballot again.

Nuclear power is the middle of a Schrödinger moment: it is both dead and alive. Circular economy measures will prop up Ursula von der Leyen’s Green Deal, the broad strokes of which should be presented on 11 December.

Germany will host Tesla’s European mega-factory, after the US electric carmaker decided Brexit Britain would be too much of a gamble.

Spain is getting help from the Commission to deal with its messed-up olive oil market but wants even more assistance to mitigate oversupply issues. New technology could prevent unwanted male chicks from suffering. Yikes.

The UK might still be on track to leave but that did not stop the government requesting the services of the EU’s earth observation satellite, Copernicus, to help deal with large-scale flooding. Opposition party Labour was hit with several cyber-attacks.

Von der Leyen’s request for a Commissioner name still has not been acknowledged by Westminster. H/t Beatriz Rios for noticing that the Parliament has credited incumbent Julian King with two different, incorrect job titles over the past two days.

The EIB’s vote on scrapping fossil fuel funding in Luxembourg, if Germany’s abstention does not delay the process further. Commissioner hearings bright and early.