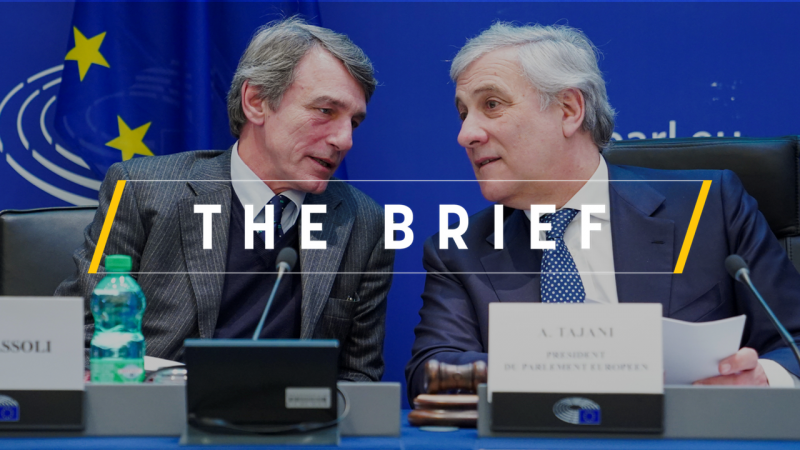 Those of you familiar with a certain Italian eatery in the European Quarter in Brussels will be aware of an enigmatic pizza option known as il Segreto. But MEPs would be wise to dispense with secrets when it comes to making far-reaching decisions, like who should be Commission president.

Order the il Segreto at Schuman’s La Brace restaurant and you can expect to dig into anything from a seafood surprise to a half-artichoke baked under the cheese.

It’s a whimsical, but also clever, way to use up ingredients that would probably otherwise end up in the bin. Putting your faith in secrets to appoint the next head of the EU executive, though, is irresponsible in this day and age.

A short while after today’s Brief is published, MEPs will vote in secret on whether to approve the candidacy of Ursula von der Leyen. She is a candidate who rode in at the last second to act as the sword that struck down the Parliament’s cherished Spitzenkandidat process.

The secret nature of the paper ballot makes it all the more difficult to predict if von der Leyen will succeed in her quest to secure at least a 374-strong majority.

On the one hand, MEPs who feel strong-armed by national parties to vote for a candidate they don’t really want can rest easy in the knowledge that they can basically rebel with impunity.

That goes for EPP lawmakers too, who may have been put off by her concessions to the centre-left. If MEPs vote No, it’s likely that the Council would propose another EPP candidate in her stead.

On the other hand, it offers political groups a way to support von der Leyen, secure concessions in return and not look weak in throwing Spitzenkandidat under the bus, after the Parliament invested so much time and effort in championing it.

Much has been said about how important the Commission presidency is (even if the power of the position has been largely overstated). That is why MEPs should be accountable to the people who elected them. Regardless of how the vote pans out.

The Parliament’s rules of procedures dictate that the vote should be held in secret. So the first thing on the EU assembly’s docket should be to alter that proviso.

New Parliament boss David Sassoli and his predecessor, the now-head of the constitutional affairs committee Antonio Tajani, should put together a good old Italian job to push through the change.

After all, the final confirmatory vote on the fully-formed Commission is fully transparent and will reveal how much good faith the 28-strong college has in its back pocket for the next five years. The vote on the president should be no different.

Attempting to change the transparency of how MEPs vote has come a cropper in the past but voters deserve to know explicitly who has invested the next head of the Commission with enough legitimacy to hold the office.

The way things stand, the Parliament does not deserve to keep the Spitzenkandidat process, even if transnational lists are bolted on to it. MEPs will be entitled to complain about Council backstabbing and horse-trading only if they truly get their house in order before 2024.

If they insist on brokering their little side deals and then voting with basically no accountability, the debate about a better Europe is over. Making this once-every-five-years vote more transparent is an easy win.

We’re partnering with California company Fulcrum BioEnergy to turn garbage into jet fuel. It saves about 80% in emissions and reduces landfill waste. At BP, we see possibilities everywhere… to help the world keep advancing.

All eyes are at the European Parliament’s Strasbourg plenary. The speech Commission President-designate Ursula von der Leyen delivered to MEPs before their vote to confirm or reject her nomination was hailed as a major step forward both by Socialists and the Greens, but it also raised eyebrows in the EPP ranks.

Space exploration and exploitation has traditionally been the domain of the Americans and Russians. But Europe steps up its presence in the void above, too. Here’s a break-down at what the future holds.

Romania held its first rotating presidency of the Council of the EU between January and June. But how did the Eastern European country perform during its six months at the helm? Our special report outlines its main outcomes and successes.

Serbia will join the EU only when it is deemed ready and the bloc has been reformed and fit to take in new members, the presidents of Serbia and France agreed during Emmanuel Macron’s visit.

The EU’s Agriculture Commissioner, Phil Hogan, sought to address national concerns over the proposed EU-Mercosur trade deal but struggled to dispel them.

EU member states gave the European Commission a mandate to revise the Energy Charter Treaty, saying the legally-binding charter must reinstate Europe’s “right to regulate” in areas like climate change and workers’ rights.