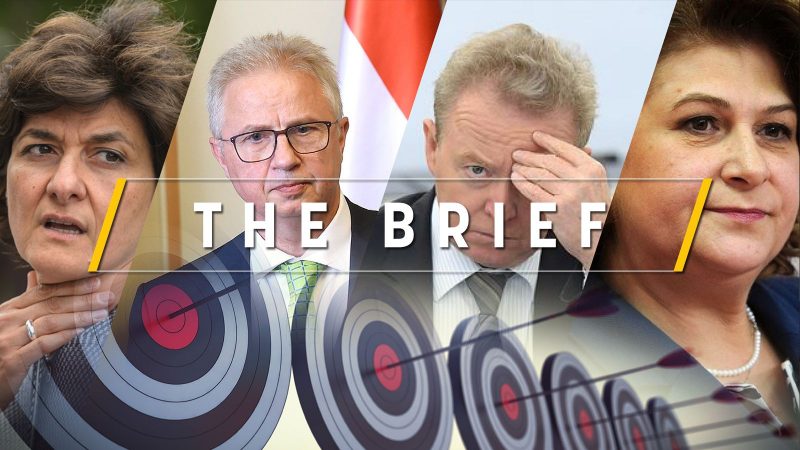 This week’s European Parliament plenary session will be the first after Ursula von der Leyen unveiled her team of Commissioners last Tuesday.

It will also mark the opening of the hunting season as the newly-elected MEPs have started preparing for the confirmation hearings of the 26 Commissioners-designate (or 27, if there is another last-minute Brexit delay).

Behind the scenes, political parties are wagering on whose heads are most likely to roll but also drafting alternative strategies should one of their protégés get the axe.

In the firing range are four candidates who found themselves exposed for different reasons: László Trócsányi (Hungary, EPP), Rovana Plumb (Romania, S&D), Sylvie Goulard (France, RE) and Janusz Wojciechowski (Poland, ECR). It remains to be seen if Belgium’s Didier Reynders (RE) might join them.

Pascal Canfin, the chairman of the Parliament’s environment committee, says the question now for political groups is relatively simple: “Either the Parliament absolutely wants to go clay pigeon shooting” – and aim for the three or four most likely targets – or it adopts a neutral stance in order to avoid a lethal cross-fire of reprisals.

“Nobody has an interest in opening the hostilities,” Canfin told a group of Brussels-based reporters on Friday (13 September).

“If all the political groups decide to go after the Romanian socialist, there will be retaliation,” Canfin said. “The question, therefore, is to determine whether a differentiation can be made” between individual cases in order to avoid triggering a series of reprisals that will leave casualties in every camp.

MEPs cannot reject Commissioners individually – they can only reject the Commission as a whole.

But if there is sufficient cross-party backing against one candidate, MEPs can apply pressure to get that Commissioner replaced. This is what happened in 2014 to Alenka Bratušek, the Slovenian nominee, and Rumania Jeleva, the Bulgarian candidate in 2010, after an unconvincing hearing in Parliament.

Others can find shelter behind influential political parties. This is what saved Miguel Arias Cañete’s head in 2014 after the EPP and S&D groups banded together to preserve his otherwise weakened candidacy.

The difference this time is that the EPP and S&D no longer enjoy a majority in Parliament and will need to find broader support to protect their respective candidates. And that leaves all of them potentially more exposed.

Of the four, Hungary’s Trócsányi stands out as the most obvious target.

A former justice minister, he has been accused of helping to undermine rule of law standards in his home nation. Given that his assigned portfolio is heavily linked to promoting those very standards in EU candidate countries, he has already faced accusations that he is unsuitable to represent Europe’s values abroad.

Moreover, Trócsányi does not enjoy unconditional backing from his own EPP family, which suspended Hungary’s Fidesz because of its anti-immigration policies and repeated assaults on the rule of law under Viktor Orban.

Tellingly, a family photo of all the commissioners-designate from the EPP party, circulated on Twitter last week, had only one new member missing: Trócsányi.

Will Trócsányi be the Parliament’s sacrificial lamb? For the time being, all indications point in that direction. But beware of the backlash.

***A message from BP***
Solar power has a bright future. Read about how we’re driving worldwide growth in solar through our exciting partnership Lightsource BP.

Spurred on by Emmanuel Macron, the incoming European Commission is showing new ambition and appetite for Europe to be a truly global power. And Germany seems to like the idea as well.

An overlooked detail of von der Leyen’s team announcement last week, was the shift in power over agricultural antitrust issues from one Commission department to another. Gerardo Fortuna has the story here.

After the ECB urged Germany and a few other EU countries to invest more to counter recession risks, the Commission and some member states, including France and Italy, have followed suit, asking ‘those with fiscal space’ to invest billions.

Under the election programme of Poland’s ruling right-wing Law and Justice (PiS/ECR), there would no longer be immunity for judges and prosecutors and it would be possible to detain parliamentarians at the request of the prosecutor general.

Agriculture accounts for more than half of methane emissions. Methane, emitted when cows belch, is the second most common greenhouse gas on the planet. Its effect on the atmosphere is thirty times more harmful than that of CO2, but it is not being dealt with.

The Frankfurt motor show was disrupted by protestors over the weekend, confirming that the car industry is not a sacred cow in Germany anymore.

Protestors also made their voices heard in Luxembourg. So much so that UK PM Boris Johnson cancelled a scheduled press conference. The lack of news caused by his no-show and Jean-Claude Juncker’s copy-paste statement prompted the EURACTIV newsroom to get creative….

Take a peek inside our Commission tracker and vote ….  Belgium’s Didier Reynders is the latest candidate to potentially fall into the Parliament’s firing line. Who gets your vote?

The European Parliament continues its plenary session in Strasbourg.