The Brief, powered by BP – The forgotten man 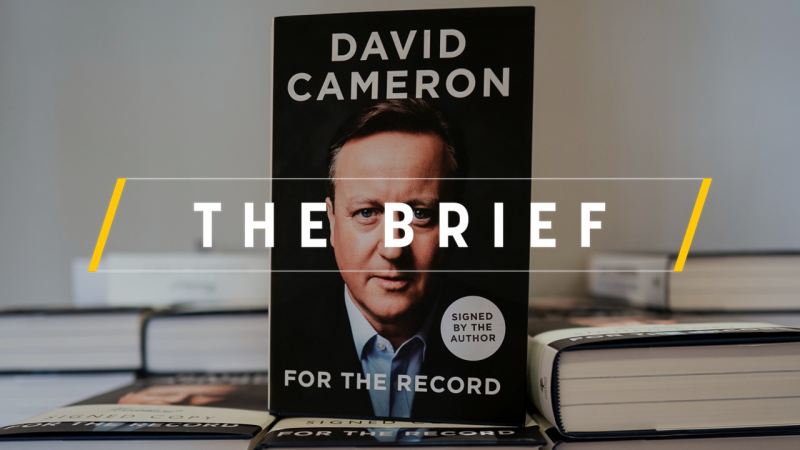 As the UK has lurched between political and constitutional crisis, the man who crashed the ship of state into the rocks has been nowhere to be seen. Until now, when David Cameron finally emerged from self-imposed media hibernation.

The ex-Prime Minister has a 700-page memoir to sell and scores to settle, principally with Boris Johnson and his once close friend, Michael Gove, who, in Cameron’s eyes, betrayed him by running the Leave campaign to oust him from the premiership for purely personal gain.

Those searching for remorse are going to be disappointed, at least for now. Cameron is “sorry” that he lost and does “feel regret for some of the decisions and choices that I made” but he still thinks that calling the referendum was the “honest” thing to do.

But what is baffling is that he was so confident he would win it.

“I feel regret about what happened, and there are things that, if you had your time again, you’d do differently,” is as much mea culpa as we are going to get from Mr Cameron.

Like most UK politicians of the past thirty years, Cameron never really understood the way the EU worked. He never wanted to. That, more than anything else, was his undoing.

In his book, he complains that decades of anti-EU propaganda could not be turned around in a two month referendum campaign. The trouble is that Cameron was responsible for much of it, a fact that he is still unable to recognise.

This reporter recalls the Fiscal Compact agreed by all EU leaders, except Cameron, in December 2011. The treaty, agreed at the height of the eurozone debt crisis, was intended to enshrine the debt and deficit rules in the EU’s Stability and Growth Pact into national constitutions.

Cameron saw the opportunity to demand guarantees for the UK’s financial sector only to pump out Eurosceptic rage when EU leaders told him where to go.

“You have missed a great opportunity to be quiet,” was Nikolas Sarkozy’s retort to Cameron.

Several years later, after being presented with a bill for several billion euros as a result of an adjustment to the EU budget remissions, the then Prime Minister turned puce with anger. And that was before his cack-handed attempts to renegotiate the UK’s membership status.

Yet despite getting the biggest decision of his premiership wrong. Cameron’s ill-fated Remain campaign, in the main, focused on the facts and the rational case for EU membership. In an era dominated by post-truth politics in the UK and elsewhere, that pragmatism feels like a long time away.

While France seems to have found in Germany a friend to face together the American trade threat, French MEPs in the European United Left/Nordic Green Left (GUE-NGL) were put in a corner by their colleagues over scrapping the Strasbourg seat.

We sat with German MEP Peter Liese to speak about the European People’s Party (EPP)  proposal to set a special parliamentary committee with the aim of formulating a new EU-wide plan to fight cancer.

More and more investors are making their investment decisions based on climate and sustainability criteria, asking the EU legislators binding measures to shield their investments from the climate risk.

By the way, there’s a ‘coal bubble‘ over the horizon which could send carbon prices crashing…

New technologies will help to decarbonize the energy-intensive process of making aluminium and other non-ferrous metals, DG Clima boss Mauro Petriccione told us in an interview.

Don’t miss a new episode of the longstanding legal saga on biotech copyright! This time, the European Parliament reproach the European Patent Office saying that tomatoes, broccoli and other plants obtained by essentially biological processes must not be patentable.