The Brief, powered by ESA – Remembrance 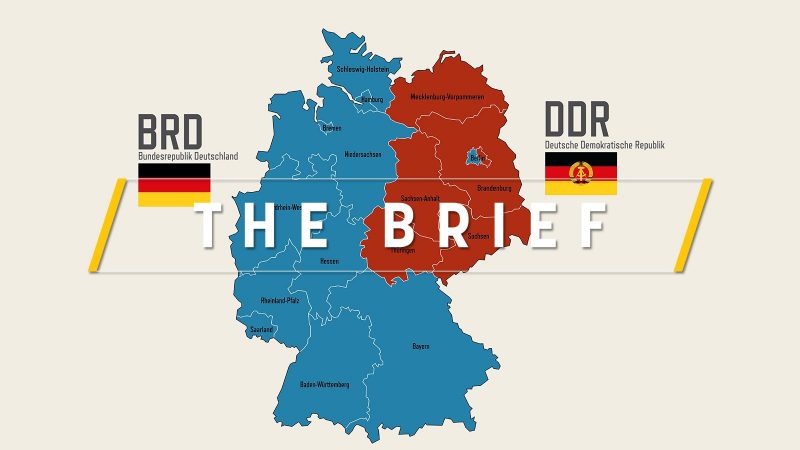 France likes to celebrate its revolution with the demonstration of its military power. None of this in Germany. The country, and Berlin first and foremost, is preparing to celebrate tomorrow the 30th anniversary of the fall of the Wall and its peaceful revolution with a huge artistic work in full colour.

However, that will not be enough to hide a certain bitterness and sadness.

There is a gigantic, colourful wave floating weightlessly from the Brandenburg Gate over 150 metres on the Straße des 17. Juni. On it, there are 30,000 wishes, hopes and ideas written by German citizens on the tapes that form this powerful art installation.

Yes, Germany, and Berlin in particular, is remembering difficult times in a colourful way. By the way, with another huge difference from its neighbour France: the art installation, called “Visions in Motion”, does not come from a national artist, but from American Patrick Shearn.

Thirty years ago, the peaceful revolution was driven by the wishes, demands, hopes and visions of countless people. In Leipzig, in Dresden, in Chemnitz, not just in Berlin. Now, with reunified Germany coming of age, what has happened to these hopes and visions?

EURACTIV Germany went on the road and gave the microphone to citizens whose voice otherwise hardly hear because they are not politicians or former civil rights activists. They are just citizens, like you and me.

Kristin Wesemann tells us about how it felt to be allowed to take her GCSE again, something which had long been forbidden to her.

Michael Brack talks about why he had to spend time in prison.

Wolfgang Rümenapf shares the story about the time before the fall of the Wall, the night of 9 November and how his village found a partner community and friends in the former GDR thanks to a balloon.

And Antje Wissel tells us how it feels to come from a country that is no longer on the map.

“It is a strange feeling to have a birth certificate with a seal from a country that no longer exists,” she says.

“The grandparents generation, also the generation of our parents, had to start twice completely anew. The first time after the Second World War, with the settlement of the so-called Soviet zone that implied measures like currency reform and expropriation. The second time in 1989. That was again a whole new start, a new biography. It explains a lot about the situation in the new federal states today,” she explains.

If there is one common thread to be highlighted, it is this: from one day to the next, everything changed. And precious little remains from the legacy of the former German Democratic Republic.

Listening to the German citizens/participants who took the time to talk to us, one can not help but think that it takes a 30th-anniversary celebration to finally hear about a former country that otherwise finds hardly any attention in a westernised Germany – and in Europe.

Ewald König, who served as editor-in-chief of EURACTIV Germany, attended the historic press conference in East Berlin where a blunder by East German official Günter Schabowski triggered the fall of the Berlin Wall in 1989. This is his account of this incredible episode.

The EU is inching towards an agreement on the conditions under which third countries will be allowed to participate in the bloc’s military projects, which would allow US and UK companies to take part in joint defence projects, potentially removing a source of friction in transatlantic ties.

More people than ever are aware that the giant ships carrying 80% of global trade are also giant polluters. Green MEP Bas Eickhout argues in an exclusive opinion piece that regulators face a choice between real and fake CO2 regulations for shipping at UN negotiations next week.

The EU decided last month not to open membership talks with Albania and North Macedonia just yet. But there is positive economic momentum in the Western Balkans, with more foreign investment coming in, and it needs to be maintained, write Borge Brende and Martina Larkin of the World Economic Forum.

General election in Spain on Sunday (10 November). Monday is a public holiday in Belgium – the Brief is back on Tuesday.