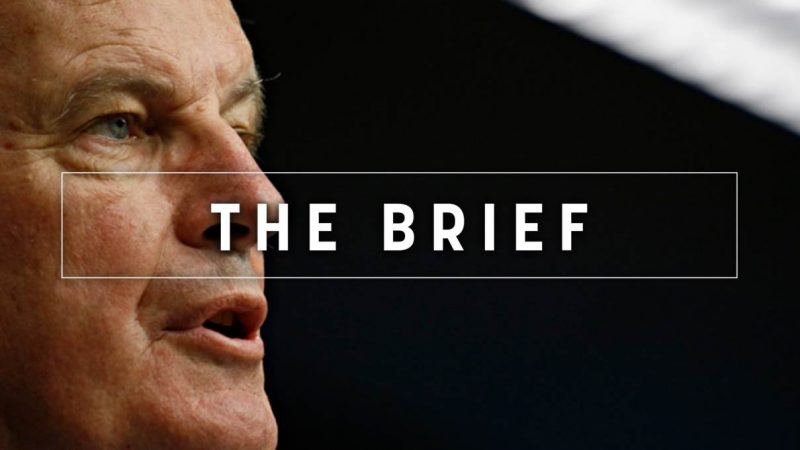 Don’t call it a comeback, he’s been here all along. Brexit boss Michel Barnier definitely still wants the EU’s top job and is now touting himself as the candidate everyone could live with.

Last week, the Frenchman published a shortened version of a speech he gave back in November, outlining four priorities: climate change, migration, jobs and defence.

He also wants Europe to be the world’s first fully-electric continent, better taxation of big tech and smartphones that last longer.

The New Year timing is clear: it’s his way of reminding everyone, five months out from the European elections, that he is ready to be the dark horse and jump into the driving seat of the European Commission.

His 5 November speech came just a few days before the EPP group met in Helsinki and chose Germany’s Manfred Weber as its lead candidate to succeed Jean-Claude Juncker.

Barnier was, frankly speaking, treated poorly in the Finnish capital. The delegates who actually showed up chatted among themselves during his speaking time and were even seen snapping selfies with Weber and Angela Merkel while Barnier was on stage.

But the Frenchman could have the last laugh because Weber isn’t going to get the top job –  it is unlikely that the European Council will stick to the so-called Spitzenkandidat system that elevated Juncker to power in 2014.

The Bavarian lacks government experience to begin with. But it’s his tolerance of Viktor Orbán’s Fidesz party that will prove his undoing. The Article 7 debate last year was ugly and the story is far from over yet.

Most polls show that the EPP will remain the largest group after the May elections. But it’s in the Council, where the EPP and liberal ALDE party are evenly matched, that the big decisions will be made.

Spitz has been firmly denounced by the non-EPP contingent as a pro-EPP system, given that it rewards the most popular party with first dibs at the plum jobs, although most of the other groups have still chosen their candidates to hedge their bets.

If the EPP had chosen the more palatable Alexander Stubb it would be more plausible to imagine the process getting a second outing, but EU leaders will also balk at Weber’s nomination because he is tainted by his unwillingness to denounce the illiberal element of his political group.

With unparalleled experience of national and EU politics, coupled with immense kudos built up during the Brexit talks, the silver-haired negotiator is a strong pick. He’s also far more likely to get non-EPP support and even reached out to ALDE leader Guy Verhofstadt in his speech.

Barnier has been critical of Emmanuel Macron but the French president’s role as kingmaker is more and more in doubt, as the May ballot may not deliver his En Marche movement the dividend it might’ve won this time last year.

So the pieces gradually continue to fall into place, mostly predicated on the assumption the EPP will indeed be the biggest group after the elections.

Good job we can trust the polls. Most of the time…

Join us for a compelling debate with industry, leading brands and specialists on best practice in the packaging loop and next steps as the Circular Economy unfolds. Register now and see you on 23 January 2019 in the Residence Palace in Brussels!

Brussels was left rather puzzled after the Trump administration downgraded the diplomatic status of the EU ‘s delegation to Washington.

Trade boss Cecilia Malmström headed to the US capital for a new round of talks with, as potential tariffs on cars loom large over the heads of European industry.

The EU meanwhile is looking into how to help Theresa May but will not rework the Brexit deal. Brussels is also ready to offer UK airlines extra time in case of a no-deal scenario.

France and the UK are trying to stem the small number of illegal crossings made by migrants across the Channel, with a new cooperation plan.

Austria is in the starting blocks for the European elections campaign, which kicked-off just one day after the end of the Austrian Presidency of the Council.

Poland gets a pass as the new Romanian Presidency struggles with its rule of law approach. Warsaw will also create a lobbying centre in Brussels to help them exert a greater influence on EU legislation.

Latvia, meanwhile, hopes third time’s the charm and nominated a current MEP as prime minister after two other picks failed to form a government after elections held in October.

Croatian media will remember 2018 for its very high number of often bizarre court convictions for libel in favour of state officials. 2019 may prove not to be any better.

In a weird move, Italy’s deputy prime minister came out in support of the Yellow Vest movement. But France’s government wants to cut down on unauthorised protests.

British MPs debate the finer points of next week’s Brexit vote in the House of Commons.

From Wednesday, our daily morning newsletter will be sent out at 9am.