The Brief, powered by the Martens Centre – A Commission Carol Part II 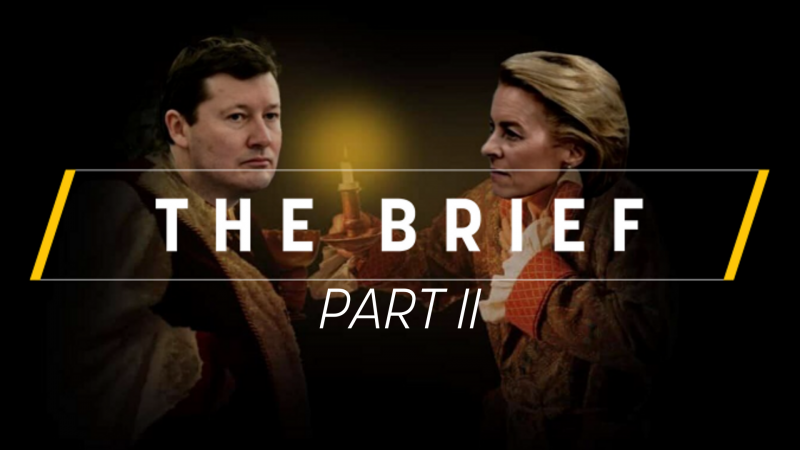 Ursula von der Leyen is set to spend her days and nights in Commission HQ, in a specially converted flat high on the 13th floor. Here, we conclude a fictional telling of what might come to pass in those haunted hallways a few months from now…

(If you missed Part I, catch up here)

Far below, as she was being announced as new Commission president by Donald Tusk, Ursula saw confused journalists, a weeping Manfred Weber and thousands of regular people losing a little more faith in the EU.

“Look at what you have caused, Ursula. Voters began to trust us a bit more and then it was all brushed away in an instant,” Timmermans lamented, tears in his beard. Ursula vainly tried to explain it was Macron’s doing but the spook replied: “You still said yes.”

A chill swept through her, as did the memories: the phone call asking her to take the job, the away-day at Chateau du Lac, portfolios on top of portfolios, Poles after Poles; everything that had happened after that fateful July night.

“It must be undone,” Timmermans warned, in several languages. “What can I do, Spirit? The deed is done,” Ursula panicked.

The flying Dutchman dragged them through the night air to an apartment, a symphony by Dvořák and the waft of pancakes coming from the window. A black-haired woman sat at an office desk, pouring over documents: Věra Jourová was burning the midnight oil.

“Why are we here?” Ursula asked, though she already knew the answer. “She is the key, make Věra work on the transnational lists, bring Spitzenkandidat back, that is how you can save yourself,” Timmermans explained.

As they hurtled back towards the Commission, she remembered including the lists in her mission letter to Jourová. But what seemed like a flippant olive branch to MEPs at the time now took on new importance.

The next evening, the president stayed up again, impatiently awaiting the other ghost Selmayr had promised, when the cold and windy 13th floor suddenly became chillier still.

A black-hooded figure strode through her office-bedroom door, shrouded in a fog of gloom.

Fear gripped Ursula as the silent phantom grabbed her wrist and dragged her along the hallway. Darkness enveloped them both but an instant later, she was stood in the European Parliament. A wall-clock said the date was March 1999.

“Ghost, why are we here?” Ursula dared to ask but the spirit remained silent.

A man addressed the Parliament, insisting that the Santer Commission must resign, that there had been wrongdoing and that Commissioners must take more responsibility for their actions.

Before Ursula could ask more questions, darkness enveloped them once again. She opened her eyes to see a large building in front of her. The shiny letters above the revolving doors read ‘Goldman Sachs’. A slick-haired, smiling man walked through them.

The phantom shook its head and pointed at other buildings, the names of UBS, Gazprom, Mossack Fonseca and more stretched away into the dark. Ursula began to realise the ghost’s point but was quickly whisked away to another scene: the Parliament again.

This time it was October 2019, and very familiar faces sat in front of committee hearings, answering questions on everything and anything, from think-tank payments and the CAP to migration and job titles.

Tabloid newspaper headlines raced in front of her eyes, an unlikely list of Brit Commissioners plastered on the front pages. It was all that was needed to crank Ursula’s fears up to breaking point.

The phantom sensed her terror and croaked in her ear: “Be careful who you trust, Ursula. I wasn’t” and then vanished. She suddenly awoke in her own bed, drenched in sweat, the midday sun hurting her eyes.

The lessons of the night before firmly in her mind, Ursula ran through the hallways of the Berlaymont, past the portraits of her predecessors, to the press room.

Rushing past a startled Maroš Šefčovič, she instructed him to go buy the biggest turkey he could find, then burst onto the press room stage, shoved the spokesperson away from the podium and addressed a gaggle of awaiting journalists: “I have some things to tell you…”

Years & Years & Years
2019 marks (or not) the era of a post-Brexit EU, the transformation of our economies for a sustainable future, and a time for bringing the EU closer to its citizens. NET@WORK will create a common ground for public discussion and come up with new solutions. Care to join?

Commissioner confirmations came thick and fast: Věra Jourová and Josep Borrell got the green light soon after their hearings, while Janusz Wojciechowski and Ylva Johansson belatedly secured MEP approval. Valdis Dombrovskis also got all the backing he needed.

Margrethe Vestager faced down three committees, with Frans Timmermans set to round off proceedings later this evening. Follow his hearing live here.

Positive assessments for embattled candidates have led to suggestions that a truce has been called and that France’s Sylvie Goulard will face no further problems, despite a difficult hearing.  A decision on her is due tomorrow, all other details on the class of 2019-2024 here.

One of the current crop of Commissioners, Cecilia Malmström, spoke to Jorge Valero about the Airbus WTO case and the “unpredictable” administration of Donald Trump.

Pressure is growing on EU member states to agree on a migrant disembarkation scheme and although agricultural payments were largely free from error, according to EU auditors, billions of euros were misspent across the budget.

This Greek MEP insisted that the EU’s left should not turn its back on agriculture digitalisation. Stay tuned here for our ongoing special report on vaccination.

In climate news, Germany shunned the chance to join eight other nations in calling for more ambitious policies and activists took to the streets to make their voices heard but the Bunderepublik’s steel sector doesn’t seem to have got the memo.

Armenia’s prime minister says that last year’s Velvet Revolution is leading to “a technological revolution” and Kosovo took a step closer to getting a new leader after the weekend elections.

Check out our latest Over a Coffee. EU Ombudswoman Emily O’Reilly talks about her bid to serve another five years at the head of the bloc’s watchdog.

In our semi-regular feature “Donald Watch”, the EU’s Tusk told UK PM Boris Johnson to quit the “stupid” Brexit blame game and even threw some Latin at him. Earlier, Trump said his “unmatched wisdom” would destroy the Turkish economy if necessary…

This week’s Transport Brief takes a look at all the news of the last seven days, including aerospace angst, irritation at ICAO and satellite prospecting. More here. Also be sure to have a read of the latest in our “20 Visions” series.

Confirmation from MEPs on the candidacies of Vestager and Timmermans.