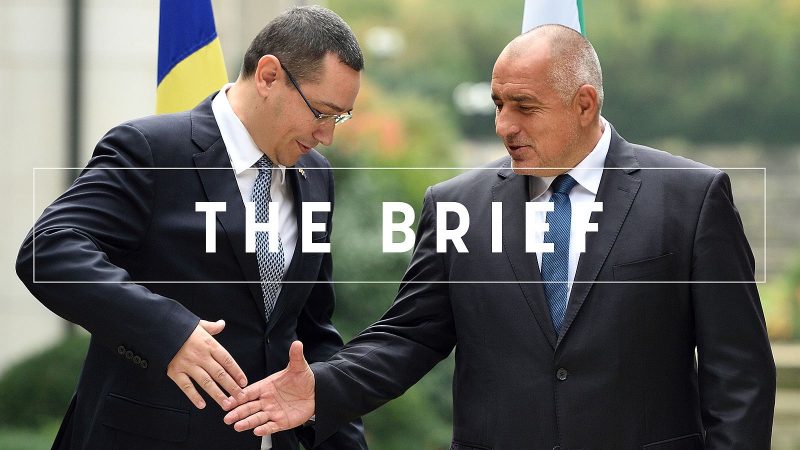 The Brief is EURACTIV's evening newsletter. In the photo: Victor Ponta and Boyko Borissov.

There is a saying, attributed to Otto von Bismarck, that “the biggest lies come before elections, during a war and after hunting”.

Elections are definitely approaching and EURACTIV has been keeping track of fake news by politicians. And the big catch came today, not once but twice.

First, we learned with dismay that Victor Ponta, the former Romanian social-democrat ex-prime minister, who created his own party, had joined ECR, the Eurosceptic group founded by his former colleague David Cameron. Not exactly a close ideology, we presume, but he did it.

We wouldn’t be so surprised if this gentleman hadn’t recently come to our office and made assurances in a long-ranging interview, that his party is the real partner of PES. “I’ve been a social-democrat all my life, and still believe modern social democracy is the family that I fit in,” Ponta said and repeated.

To us, this gentleman is a liar and we will take care to remember this each time it becomes necessary to mention his name.

By the way, we also wonder if Commission President Juncker knows that one of his Commissioners, Corina Crețu, has changed political affiliation or if she didn’t bother to inform him.

The second big lie came from Bulgarian PM Boyko Borissov, who accused justice Commissioner Vera Jourová of being politically biased when she recently said that the monitoring of Bulgaria under the so-called Cooperation and Verification Mechanism (CVM) will not be lifted.

“Ms Jourová is from the liberals, our adversaries at the elections, DPS is with them (the Movement of Rights and Freedoms). Yes, but Timmermans, who is in charge of the monitoring, says something else.”

We asked Commissioner Jourová to react and she did, immediately. She wrote:

“The question was if till the end of the mandate of this Commission the CVM could be lifted. I gave an honest and realistic answer: due to the short time left (until the end of the Commission’s term) and due to the several concrete CVM recommendations still to be implemented, the lifting of CVM is NOW improbable. There is no bias or party politics behind this statement.”

For Borissov, it’s just too uncomfortable to admit just before an important election that he has failed to obtain the lifting of the monitoring. But to accuse a Commissioner of political bias is rude, and his explanations won’t wash.

Both in Bulgaria and in Romania, politicians tell their domestic audience whatever they want. In Brussels, they speak a different language. But this doublespeak has to stop.

Huawei, the embattled Chinese tech giant, says the US founding fathers would be “alarmed” by the Trump administration’s recent action to restrict access for Chinese businesses, as more and more countries seem keen to form their own position, independent of Washington.

EU Social Democrats criticise former Romanian PM Victor Ponta for being a turncoat, after his new party joined the conservative ECR group despite pledging allegiance to the S&D before.

Surveys in France predict the victory of Marine Le Pen’s Rassemblement National in the EU election, even though RN is neck and neck with, or even a touch below, Emmanuel Macron’s La République En Marche. EURACTIV France looks into media reports on the subject.

Also in France, President Macron is contemplating “a founding convention for Europe after the elections”,  a mix of ideas from citizens and leaders that could necessitate changes to the EU Treaties.

How does EPP-candidate Manfred Weber stand on environmental issues? He now backs a net-zero emission target for 2050 but the Bavarian is a late convert to the green cause.

If you’re interested in where European political parties stand on migration, take a moment to read Beatriz Rios’s story.

And be sure to check out this week’s action-packed Transport Brief.

Last days of EU campaigning before the vote in the UK and the Netherlands on Thursday.