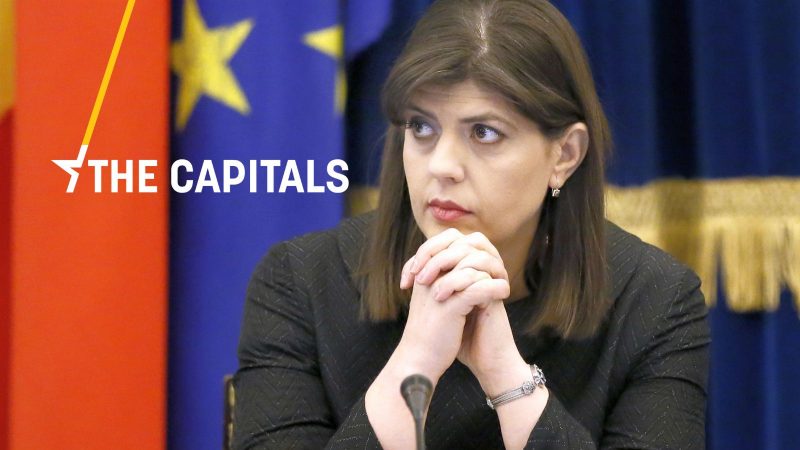 The Capitals is EURACTIV's daily newsletter from across Europe. [Robert Ghement/EPA]

Restrictions against Kövesi. Laura Codruța Kövesi, one of the top contenders for the post of the Chief European Prosecutor, has been placed under “judicial control” by a special agency that investigates judges and prosecutors, meaning she is banned from leaving the country. She has also been banned from speaking to the press.

On Thursday, Kövesi was questioned by prosecutors for almost seven hours, but she denies any wrongdoing and says the investigation is only meant to prevent her appointment as Chief European prosecutor, which the Romanian government is fiercely opposing. The European Parliament selected her as its nominee, but negotiations with the EU Council ended in a deadlock on Wednesday.

Referendum for justice: President Klaus Ioannis has announced he is calling a referendum in support of the judiciary to be held on the same day as the EU elections. “Justice is a matter of national interest, and citizens have the sovereign right to decide whether or not to let corruption become state policy,” Iohannis said, accusing the ruling party (PSD) of trying to weaken anti-corruption legislation.

“The PSD continues the assault on justice since coming to power,” the president said. (EURACTIV.ro)

President and Chinese. Croatian President Kolinda Grabar-Kitarović received a delegation from the China Communications Construction Company and the China Road and Bridge Corporation, the contractor that is building the Peljesac bridge in the southern Adriatic,  financed from EU funds.

“This is a project of great importance” for Croatia as well as for China, “because this is the first contract of this kind in the EU”, the President said adding that there “is potential for cooperation between the two countries to expand further”. On 12 April, Dubrovnik will host a summit of Eastern and Central European Countries and China, in the 16+1 format.

Grabar-Kitarović said Croatia recognised the importance of the Chinese One Belt One Road initiative, “which ensures the sustainability of world economic development but also promotes peace, security and friendship among countries.” In this context, she mentioned the Three Seas Initiative (cooperation of EU members from Baltic to Adriatic and Black Sea who are almost all members of 16+1).

Why pay rich Brits? Branimir Bunjac, an MP for the populist Human Shield party, a partner of the Italian 5 Star Movement,  criticized a bill that would grant British citizens the right to health insurance for a year after Brexit on a reciprocal basis. British people are rich enough to pay for themselves, says Bunjac. (Željko Trkanjec, EURACTIV.hr)

Not one euro less for CAP. “It is out of the question that France accepts one euro less on the budget of the Common Agricultural Policy. If we do not get this, it will hurt all the peasants of Europe,” French Agriculture Minister Didier Guillaume said on Thursday during a FNSEA congress.

The European Commission is proposing a 5% decrease in CAP expenditure in the EU’s next seven year budget. Agriculture spending accounts for around 40% of the EU budget and France, the EU’s leading agricultural power, is its largest beneficiary.

Twenty of the 27 member states of the European Union (once the UK leaves), support this view, Guillaume said. “We have a problem, it’s Germany’s position that seems to be changing,” he added.

Now, could you leave, please? 46% of the French are ok with a no-deal Brexit, and as many as 63% of Le Pen voters, according to a poll by OpinionWay-Tilder for Les Echos. But 49% think negotiations should continue until an agreement is found. Showing their solidarity with Theresa May, only 38% of women sign up to a no deal Brexit, against 55% of men. (Aline Robert, EURACTIV.fr)

Third time lucky?: MPs are set to vote on Prime Minister Theresa May’s Brexit withdrawal agreement on Friday, as the cabinet hopes it passes at the third time of asking.

The political declaration covering the UK’s future relationship with the EU after Brexit will not be put to the vote.

There had been confusion as to whether Commons speaker John Bercow would allow a third vote to take place. But, after having decided that the plans were “substantially different,” Bercow permitted the vote. (Samuel Stolton, EURACTIV.com)

Catalonia questions anger foreign minister. A frustrated Spanish Foreign Affairs Minister, Josep Borrell, interrupted an interview with German TV station Deutsche Welle (DW), broadcast on Wednesday evening, when he was asked about the political situation in the Catalonia region and the possibility of a reform of the Spanish Constitution, EURACTIV’s parter EFE reports.

In the interview, the DW journalist stated that, according to data from the Centre for Sociological Research (CIS), 70% of Spaniards would be in favour of reforming the 1978 Constitution. Burrell expressed his doubts about the figure and demanded to interrupt the conversation. (EuroEFE.EURACTIV.es)

Self-defence: The Italian Senate gave the final green light to the so-called “legitimate defence” bill, strongly supported by Lega’s Matteo Salvini. The new law lays down stiffer punishments for burglary and considers self-defence “always legitimate” for those who shoot intruders in a state of confusion in a dangerous situation. Opponents of the bill say it risks an increase in accidental shootings and the use of firearms.

Insider trading: Giuseppe De Longhi, president of the appliances manufacturer De’Longhi, is under investigation for having allegedly passed ‘price-sensitive’ information to his sister in the period before the sale of company’s air conditioner branch to Mitsubishi.

Not so green. According to experts in the field of energy, in the next EU budget, Poland may lose funds for gas infrastructure and the development of renewable sources of energy. This is due to Poland’s apparent failure to fulfil the EU’s green energy aims and the reluctance of the EU to further subside gas infrastructure.

European Coalition on the offensive. In an interview with Polish daily ‘Rzeczpospolita’, former PM Wlodzimierz Cimoszewicz, one of the most important pro-European candidates in the EP elections, said “it is imperative for Polish patriots to remove the ruling Law and Justice (PiS/ECR) from power”. After a long political retirement, Cimoszewicz says he is back in the game “because the last four years in Polish politics have been a disaster in every aspect”. (EURACTIV.PL)

Young and united: Youth organisations of seven out of nine parties represented in the lower house of the Czech Parliament have set out a platform of “21 points for the 21st century”, which focus on digitalisation, reducing the use of plastic and more support for young scientists, EURACTIV.cz’s media partner Aktualne.cz reports. (Ondřej Plevák, EURACTIV.cz)

Retirement age cap: The Slovak parliament has passed constitutional law that caps the retirement age at 64. Opposition parties, including the neo-Nazi party ĽSNS, provided the extra votes necessary to pass the law. The reform bears huge risks for public finances in the future, especially in an ageing society, including a drop of future pensions by 10%. (Zuzana Gabrižová, EURACTIV.sk)

Revolutionary new battery. Scientists from the Bulgarian Academy of Science, in partnership with the Sofia University of St. Kliment Ohridski, have created a new generation battery that will revolutionize energy conservation, the Bulgarian press reported. The new battery would cost four times less than those in use at present.

This is an original Bulgarian invention of a safe, cheap and environmentally friendly rechargeable battery based on sodium. It can be combined with lithium-ion batteries or even replace them. The main achievement of the scientists is the development of a new type of electrode from accessible materials such as sulphate salts. (Georgi Gotev, EURACTIV)

How much exercise do you do? 43% of the Bulgarians aged 16 or more did not do any exercise outside working time in 2017. But according to Eurostat, in a typical week, 36% of the Bulgarian population exercised for 5 hours or more. Regarding this indicator, the country is among the top 10 in the EU. (Dnevnik.bg)

Unexpected turn on centre-right. Two Slovenian members of the centre-right EPP – SDS and SLS – will have a joint list for the EU elections. A third EPP member, NSi, has decided to go it alone. (Željko Trkanjec, EURACTIV.hr)

Declaration on EU issues not signed.  EU enlargement commissioner Johannes Hahn said that the Commission will assess whether BiH qualifies for candidate status for EU membership by the end of May. But, he warned that nothing can be done until the establishment of new governing bodies based on the results of the 2018 election. Although it has been announced (CAPITALS), no document on reforms in BiH as a precondition for EU accession has been signed. (Željko Trkanjec, EURACTIV.hr)

Majority thinks Kosovo is lost: 47% of Serbs believe Kosovo is lost, while 41% believe the opposite. The citizens believe that the Government will not recognize Kosovo, and that a big majority would vote against its recognition, shows a survey commissioned by the Institute for European Affairs and carried out in March by Ninamedia research agency. (EURACTIV.rs)