The Capitals: Progressive Sefcovic plays the conservative card in Slovakia 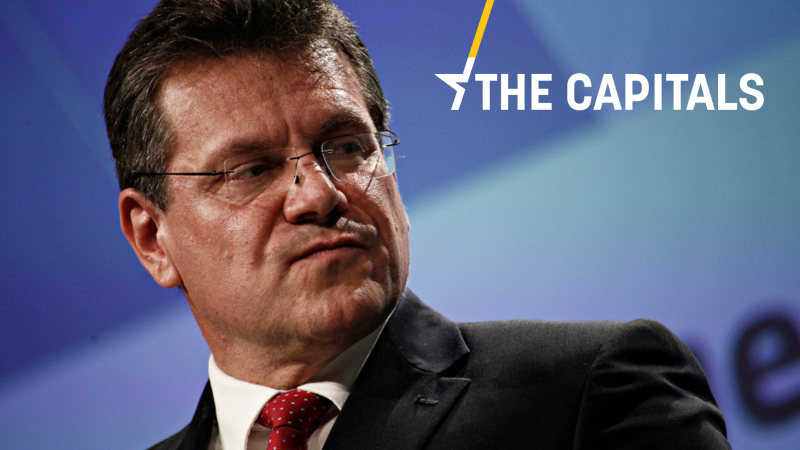 Ahead of the first round of the presidential vote on 16 March and in light of the polls that put him second, behind liberal candidate Zuzana Čaputová, Šefčovič adopted an EPP-style rhetoric.

“For Slovakia, it is very important to keep the sovereignty in ethical cultural issues and in family policy […] For me, this means support for the traditional family”, he said after a meeting with representatives of Christian churches in Slovakia.

The career diplomat, who recently withdrew from the race to become the EU socialists’ candidate for the EU elections, also opposed the adoption of children by same-sex couples.

This is not the first case when a Commissioner adopts different rhetoric in his home country from the one in Brussels.

Greek Commissioner Dimitris Avramopoulos agreed with the EU Commission support for the North Macedonia name change deal in Brussels while in Greek national media he opposed it.

Similarly, Hungarian Commissioner Tibor Navracsics said he had voted “no” in the October 2016 referendum against the Commission-proposed EU-wide migration quotas, although he didn’t oppose the proposal at the college level. (Zuzana Gabrižová, EURACTIV.sk/ edited by Sarantis Michalopoulos)

Labour under investigation: The Labour Party may face a formal investigation into allegations of anti-Semitism, after the UK’s Equalities and Human Rights Commission (ECHR) said the party might have discriminated against Jewish people.

“Having received a number of complaints regarding anti-Semitism in the Labour Party, we believe Labour may have unlawfully discriminated against people because of their ethnicity and religious beliefs,” a spokesperson from ECHR said.

However, Labour stood firm against the allegations, saying that they “completely reject any suggestion the party has acted unlawfully and will be cooperating fully with the EHRC [in their investigation].” (Samuel Stolton, EURACTIV.com)

Imprisoned Catalan to lead regionalists in EU elections: The European Free Alliance (EFA), which represents the European regionalist forces, has elected Oriol Junqueras as its Spitzenkandidat for the EU elections in May.

Junqueras is the former vice-president of Catalonia and MEP between 2009-2011. He is currently in prison due to his involvement in the unilateral call for the independence of Catalonia. The Catalan politician will also lead his political party, Esquerra Republicana de Catalunya, in Spain’s general election in April.

Puigdemont ignored police’s violence warning: Despite regional police warnings of a potential escalation of violence, former Catalan chief Carles Puigdemont decided to go ahead with the referendum on the independence of Catalonia, Commissioner of Information of Catalonia’s autonomous police force, Manel Castellvi, said at a trial.

Castellvi said regional police tried to “dissuade” Puigdemont but he said the referendum should take place, as it was “the mandate of the people.”

Black-green coalition in question: The scenario of a possible coalition between the Greens and the centre-right CDU (EPP) seems to be far from a reality.

En Marche launches its EU election campaign: Two days after the publication of French President Macron’s letter to EU citizens, which triggered various reactions, its political movement La République En Marche (LREM) launched its campaign on 7 March. LREM launched 27 sites in 24 languages. The party intends to campaign not only for French voters but for all European voters.

Teachers warn about massive protest: The Polish Teachers’ Union (ZNP) is preparing a nationwide strike following a meeting with the government, which rejected their demand for a €230 pay rise for teachers and education staff.

Nemmouche convicted of terrorist murder: French citizen Mehdi Nemmouche was convicted of “terrorist murder” on Thursday for shooting dead four people in a Jewish museum in Brussels after coming back from Syria in 2014. His sentencing, after a two-month-long jury trial, which underlined the threat posed by European jihadists returning home after fighting in Syria’s war, will be announced at a later date.

Gas market: A new energy bill was voted on 7 March further opening the Greek gas market. The Public Gas Corporation (DEPA) will be divided into a commercial one that will be privatised and an infrastructure one that will remain public, but with the possibility of a new minor strategic shareholder. It also lays down new rules on geothermal energy research and investments as well as establishes a new, more flexible, national geological research foundation.

Greek GDP grows: Greek economy recorded a 1.9% growth in 2018, amounting to €190.8 billion compared to €187.2 in 2017, according to the Greek statistical authority. (Theodore Karaoulanis, EURACTIV.gr)

Europe Together: Czech MEP Jaromír Štětina (EPP) established a new political movement called “Europe Together”, which he will lead ahead of the EU elections. According to Štětina, anti-EU forces put the EU at risk both from the inside and outside. His new movement seeks to protect the EU’s unity and one of his top priorities is also to stop the conflict in Ukraine.

Babiš in the White House: US President Donald Trump complained to Czech PM Andrej Babiš that “Europe is hard” and the negotiations on tariffs are “difficult.” Last year the US threatened the EU to impose tariffs on imported cars if the block did not lift sanctions against some US products. No deal has been reached yet and Czech PM told Trump to wait for the new European Commission and EU Parliament. (Aneta Zachová, EURACTIV.cz)

Prominent ‘business family’ under arrest: Vetko and Marinela Arabadjievi, the owners of the Marinela Hotel in Sofia, where many of the guests of the Bulgarian Presidency were accommodated, were arrested in Spain at the request of the Bulgarian authorities, the press reported on Thursday. They are indicted for participating in an organised crime group, tax evasion and money laundering. [Background] (Georgi Gotev, EURACTIV.com)

Minister of Health in bad health: Slovenian Prime Minister Marjan Šarec confirmed that health minister Samo Fakin has been facing health issues since 18 February. The health ministry said Fakin would be back next week, but rumours suggest that the PM is readying a new candidate. If Fakin departs, it will be the fourth government change since September last year. (Željko Trkanjec, EURACTIV.hr)

Unexpected turn on LNG: Hungarian Foreign Minister Péter Szijjártó said Budapest was interested in LNG terminal project on the Croatian island of Krk and two-way gas flow at the interconnection between Croatia and Hungary.

So far, Hungary has shown no interest in LNG. The change could be a result of a US Secretary of State Mike Pompeo’s visit and the ruling HDZ party’s (EPP) decision not to vote for the expulsion of Hungarian Fidesz party from the EPP.  (Željko Trkanjec, EURACTIV.hr)

Weird posters vs independent media: Posters against Beta News Agency went up near the premises of the media company in Belgrade. The posters contain Beta’s logo and a #FakeNews message. Similar incidents recently took place with Danas and NUNS newspapers.

Unlike many of the pro-government media, Beta and Danas have never been criticised by Serbia’s Press Council for publishing fake news. (Julija Simić, Beta-EURACTIV.rs)

What actually happened with the pro-EU alliance: The Electoral Bureau in Romania has rejected the registration of Alliance 2020, a pro-EU group formed by Save Romania Union (USR) party and PLUS, the party of former EU Commissioner Dacian Ciolos.

While the leaders of the two parties immediately accused the ruling coalition of shadowy manoeuvres to block the alliance’s candidates, the Bureau has said the two presidents are not entitled to represent the party.

Dan Barna was elected president of USR in October 2017 and Ciolos has been leading PLUS since February 2019, but the Bucharest Court has not issued definitive verdicts on these matters, and as a result, previous party chiefs are still legally entitled to represent the parties.

The alliance representatives have said they will contest the decision at the High Court. (Bogdan Neagu, EURACTIV.ro)

Coal-fired power plant with Chinese money: Despite EU warnings, the House of Representatives of the Federation of BiH has green-lighted the construction of a new coal-fired thermal power plant in Tuzla worth €767 millions.

It will be financed by China’s state-funded Export and Import Bank (EXIM). The EU Commission has warned BiH that this is a violation of EU regulation because state guarantees cover the entire credit lending, although it should go up to 80% of the loan value.  (Željko Trkanjec, EURACTIV.hr)