The moment of truth for Greek neo-nazis 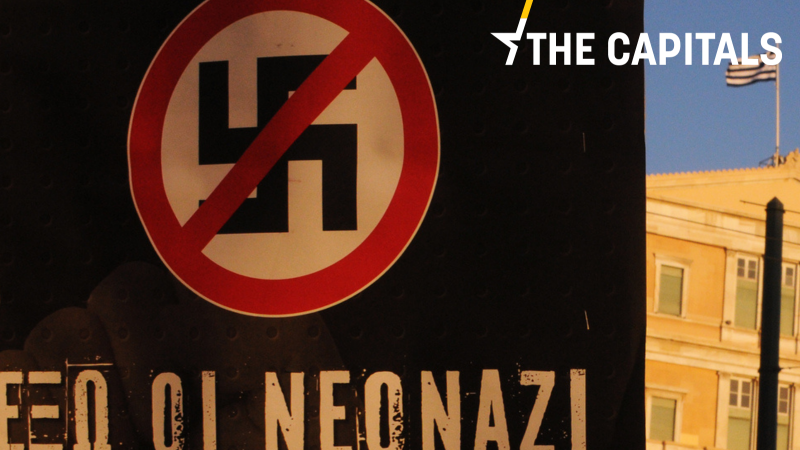 In total, 68 members of the party have been on trial, including Golden Dawn’s leader Nikos Michaloliakos. [Shutterstock / Kostas Koutsaftikis]

Before you start reading today’s edition of the Capitals, feel free to have a look at the article “Russia warns that Nagorno-Karabakh could become Islamist militant stronghold“.

A landmark court verdict. A Greek court will rule today whether neo-nazi Golden Dawn party is a criminal organisation and if therefore there was a political plan for the crimes its members executed in a heavy indictment.

“The longest trial in Greek history and the most important trial of Nazis globally after the Nuremberg Trials, is coming to an end,” wrote leftist journal Avgi.gr.

In total, 68 members of the party have been on trial, including Golden Dawn’s leader Nikos Michaloliakos.

The charges range from directing, forming and participating in a criminal organisation to possession of a firearm, forgery and assassinations. Read more.

Belgium tightens social contact rules. The Belgian government has tightened COVID-19 restrictions, taking effect at the end of the week, to counter a sharp rise in infections across the country. Read more.

WWF denounces considerable environmental impact of SUVs in France. SUV sales in France have multiplied by seven in only ten years, said World Wildlife Fund in its report published on Tuesday. From 2008 to 2018, these heavier and more polluting vehicles will be “the second-largest source of growth in French CO2 emissions, behind the air transport sector”. Read more.

New record of actively sick COVID-19 patients. In Austria, 9,207 people were struck with an active case of COVID-19 as of Tuesday morning (6 October), according to the Austrian government’s numbers. That is a new national record, surpassing the 9,123 actively sick patients recorded on 3 April. The country’s health ministry called for calmness, stating that the new measures against the virus taken on 19 September, always take two weeks to have an effect. (Philipp Grüll | EURACTIV.de)

LUXEMBOURG
First supplier of masks. The Grand-Duchy spent more money on masks and better supplied its population than its European neighbours, according to a Eurostat study. The country, which was able to build up large stocks because of the almost daily airlifts from China by Cargolux aircraft, imported €76 millions worth of masks from outside the EU in the first half of the year, meaning it spent an average of about €121 per inhabitant. (Anne Damiani | EURACTIV.com)
///

Green minister between a rock and a hard place. After some 150 activists from the Extinction Rebellion environmental group did a sit-down protest on Saturday (3 October) in a street in Helsinki, which ended with police pepper-spraying protesters at close range and arresting 51 people, including three minors, Interior Minister and Green Party Chair Maria Ohisalo said that Finnish police is known to have a good international reputation, but noted that actions should be proportionate and force used as a last resort. As a nod to the demonstrators, she underlined that in a welfare state everyone can voice their opinion.

On social media, however, the police has been criticised for how it handled the situation, particularly for its use of disproportionate and brutal force. Read more.

Big spenders. EPP’s Fine Gael party spent more funds than any other Irish political party on campaigning for last year’s European Parliamentary elections as it spent a total of €1,041,846 and won four seats, which increased to five after Brexit. This figure trumps the €794,768 Fianna Fáil spent, as the party won just one seat. Read more.

President Mattarella asks for ‘collective effort’ against COVID-19. Italian President Sergio Mattarella said that “a collective effort is needed” to deal with the COVID-19 pandemic. “Our society is paying an extremely high price for this situation, so we need to work together with businesses and society to enact a plan to help a sustainable recovery for the country”, said the president. Read more.

An 11.2% GDP drop. Spain’s GDP is expected to drop by 11.2% this year, 2.4 points than previously estimated, according to officials, EFE reported. Meanwhile, the country’s projected deficit in 2020 will be 11.3% of its GDP, an increase from the 10.3% predicted in April and higher than the one the country reached in 2012. Read more.

LexCEU judgement reactions. After the European Court of Justice in Luxembourg struck down on Tuesday (6 October) the Hungarian education law that had pushed the Central European University (CEU) funded by American billionaire George Soros to move to Vienna for violating, inter alia, academic freedom, Hungarian Justice Minister Judit Varga said the government finds such “double standards unacceptable.” It is not possible to create a law that gives the “Soros University” advantages over Hungarian universities, she told Hungarian news agency MTI. Find out what the CEU had to say about the decision.

In other news, gas storage facilities in Hungary are at full capacity, and the amount available could cover Hungary’s needs for 130 days if necessary, according to a government official. More.

Meanwhile, the percentage of Hungarians who cycle, regularly or occasionally, has reached 71%, according to a representative survey commissioned by the Hungarian Cyclists Club, writes hvg.hu. (Željko Trkanjec | EURACTIV.hr)

6am start for government officials. The Slovak government’s weekly Wednesday session will start at 6am as opposed to the usual 10am because ministers should be given the chance to do some work at their ministries after the session is over, the office of the government has informed. If proven effective, this might become a rule rather than an exception.

A similar regime was introduced by Czech Prime Minister Andrej Babiš a few years ago, but was abandoned after several months. (Zuzana Gabrižová | EURACTIV.sk)

Restaurants and theatres in Bucharest to close. Restaurants, cafes, theatres and cinemas in Bucharest will close as of Wednesday (7 October) for at least seven days, due to the worsening COVID-19 situation. Event halls and concert venues will also close, but hair salons and casinos are allowed to stay open. Additionally, authorities made the wearing of masks compulsory in a 100-metre radius around every school in the capital.

In other news, Romanian authorities announced 2,121 new coronavirus infections on Tuesday (6 October), bringing the total number of recorded cases to 139,612. More worrying is the trend of severe cases, as doctors across the country have reported that intensive care units are full.

While the number of patients in ICUs has reached record high 608, the number of people hospitalised with the virus is north of 8,000, according to official statistics. As the country’s death tally reached 5,121, Romania recorded 73 deaths on Tuesday alone, which is the highest daily death toll since the debut of the pandemic. (Bogdan Neagu | EURACTIV.ro)

Stricter measures incoming. Slovenian Prime Minister Janez Janša (SDS-EPP) announced the possibility of stricter COVID-19 measures, which include the introduction of service in bars only at tables, limiting gatherings to 10 people with exceptions, as well as limiting the number of people indoors. Out of the 2,509 coronavirus tests conducted in Slovenia on Monday (5 October), 189 came back positive as the daily number of cases and hospitalisations remain high and on an upward trajectory.

In other news, the parliamentary committee for infrastructure and environment rejected the proposal of left-wing populist party The Left for an amendment to the Mining Act, which would provide for a ban on the extraction of natural gas by the method of hydraulic fracturing, fracking, in Slovenia.

Meanwhile, global credit rating agency Moodyʼs has upgraded Sloveniaʼs long-term issuer and senior unsecured bond ratings by one notch to ʼA3ʼ from ʼBaa1ʼ, changing the outlook to stable from positive. Moodyʼs expects that the debt reduction trend will resume next year as the economy is set to recover from the pandemic shock, the health of the banking system should improve, and the country’s largest shocks should be privatised. (Željko Trkanjec | EURACTIV.hr)

Chaos in opposition SDP. Peđa Grbin, the new leader of the Social Democratic Party (SDP) elected on Saturday (3 October), did not receive support, including from his own party, for his proposed changes in the positions that SDP MPs hold in the national legislature. Read more.

In other news, Mirela Aleric Puklin asked to be relieved of her duties as deputy state prosecutor, claiming that money found in her flat during an investigation in the JANAF pipeline scandal (more in our story about Croatia’s ‘secret club’) belonged to her husband, Goran Puklin. He agreed to hide 2,593,800 kunas (€324.000), €247,200 and 20,000 Swiss francs for Janaf’s former CEO, Dragan Kovačević, days before Kovacevic’s arrest. (Željko Trkanjec | EURACTIV.hr)

Commission publishes annual Serbia report. Serbia has made no progress in relation to the election processes or the judicial system, while limited progress has been made in fighting corruption, organised crime and public administration reform, the European Commission wrote in its latest annual progress report on EU integration, published yesterday (6 October).

The document says that during the period covered by the report, Serbia achieved very limited progress in the area of fundamental rights and a certain amount of progress in the areas of justice, freedom and security. Yet, relations between Pristina and Belgrade still present a challenge, even though the resumption of dialogue with the help of the EU in July was a very positive step. Read more.

In other news, the European Commission proposed yesterday a €9 billion economic plan to support the economic convergence of the Western Balkans and the EU through investments, supporting competitiveness and inclusive growth, sustainable connectedness, and the shift to green growth and digitalisation. Read our story. (EURACTIV.rs  betabriefing.com)

Health of Metropolitan bishop of Montenegro continues to deteriorate after he was placed in the Cetinje hospital following a positive COVID-19 test. Amfilohije, the Primate of the Serbian Orthodox Church in Montenegro, was a central person in gathering opposition for the elections in August, and negotiations regarding the new government formation were held in Monastery Ostrog in his presence.

In other news, German Chancellor Angela Merkel refused to meet with Montenegrin President Milo Đukanović, news portal Borba reported. However, the president’s cabinet denied this, saying that the “meeting was neither requested nor foreseen by the working visit programme”. Đukanović will be in Berlin today and meet with German President Frank-Walter Steinmeier. (Željko Trkanjec | EURACTIV.hr)

Get well soon, Mr President. A massive billboard wishing US President Donald Trump a speedy recovery from COVID-19 that reads “Get Well Soon, Mr President – You are in our thoughts” appeared Tuesday morning near Priština’s International Airport. The billboard was paid for by Naim Murseli, who said in a tweet he had used his savings. Murseli is an adviser to Kosovo politician, former foreign minister and successful businessman, Behgjet Pacolli. In Pristina, there is also a statue of former US President Bill Clinton.